What are the Russian casualties in the Ukraine?

The average war since 1816 has claimed about 50 battlefield deaths daily. 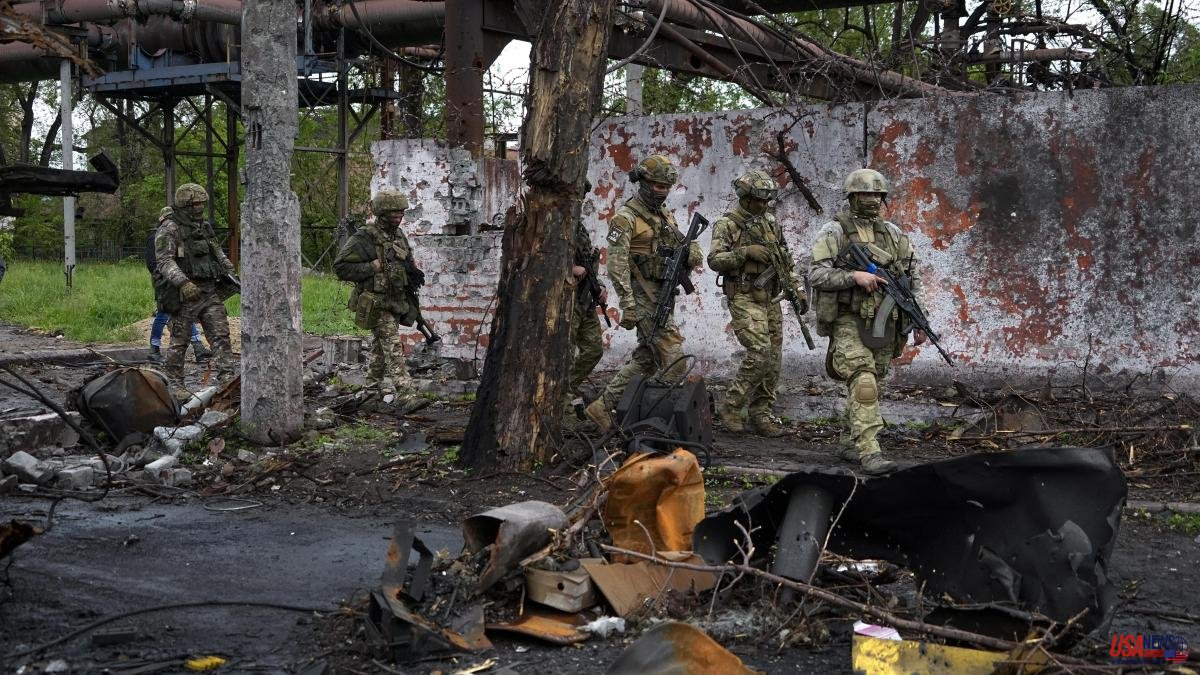 The average war since 1816 has claimed about 50 battlefield deaths daily. Russia's war in Ukraine is much bloodier. According to statements made in recent days by CIA director Bill Burns, MI6 chief Richard Moore and Estonian foreign intelligence service chief Mikk Marran, some 15,000 Russians have been killed since February 24, an average of more than 100 a day. Ukrainian officials say their own casualty rate has recently been similar and sometimes much higher. "My prediction is that the war will exceed the lethality of other major non-world European wars, such as the Franco-Prussian war of 1870-1871," says Paul Poast of the University of Chicago. Now, how are casualty figures calculated?

Military casualties fall into two main categories: those killed in combat and those wounded in combat, some of whom later die. Those who are captured and become prisoners of war and those who disappear are counted separately. Some estimates of Russian casualties in Ukraine only include army personnel. Others include the forces of the Rosgvárdia (the National Guard), the FSB (the KGB's main successor), and other non-army regulars such as the Airborne Troops (VDV) that were decimated in the early phase of the conflict. In addition, some count Russian-backed militia fighters from the Luhansk and Donetsk People's Republics (two puppet governments established in eastern Ukraine) who have recruited large numbers of local residents. These, along with Russian mercenaries, have been involved in most of the heavy fighting in recent months.

According to one informed source, US officials estimate that in total, in the three categories, between 15,000 and 20,000 Russians have been killed since the war began on February 24. On June 29, British Defense Minister Ben Wallace said that 25,000 Russians had been killed. In fact, Burns cited the lower limit of the US estimate; and Wallace, the upper limit of his. Ukraine's tally is 38,500 dead as of July 19, though the country has an obvious incentive to offer the highest figure possible. On July 19, Ukrainian Defense Minister Oleksii Reznikov unbelievably claimed that 11,000 Russians had been killed in the battles of Severodonetsk and Lisichansk alone.

The disparity in the figures reflects the fact that estimating casualties in another country inevitably involves guesswork. "It's not a precise science," says a Western official. The details of those estimates are often classified, though analysts have various means at their disposal. One of them is to take advantage of Russian estimates using secret information, such as infiltrators within the Russian government or intercepted communications in which Russian units describe their casualties. However, this data may be distorted: Western officials believe that Putin himself does not receive full information about how bad his war is going.

Another option is to rely on Ukrainian "contact reports" from those same battles, although this is somewhat more difficult when much of the fighting is out of artillery line of sight and not infantry fighting. The third is to infer casualties from destroyed equipment, which can be seen from multiple sources (from social media to satellite imagery), and from prior knowledge of how many Russians typically man a particular vehicle or form a particular type of unit. Regardless of how the calculations are made, what is clear is that the "error bars" are wide and reflect considerable uncertainty.

Arriving at injury figures is even more difficult. It is still a vital issue, since the effectiveness of an army does not depend on how many soldiers die, but on how many are out of action. In part, you can tell by looking at field hospitals, blood stocks, and other indicators of medical activity. In general, however, analysts must make inferences on the basis that the number of injured maintains a more or less predictable proportion to the number of dead.

Now, what proportion to choose? In the first and second world wars, the average ratio of the US military was slightly more than 3 to 1 (that is, three wounded for every dead), according to figures compiled by the Dupuy Institute, which collects historical data on wars. However, later the situation changed. Research by Tanisha Fazal of the University of Minnesota shows that the ratio of wounded to dead skyrocketed in the postwar period (see graph) because soldiers went to war much healthier, had better protective equipment, were evacuated more quickly if injured and enjoyed better general medical care.

It is estimated that a war in which 1,200 soldiers died in 1860 would have produced only 800 fatalities in 1980, says Fazal; and many of those who would have died before would appear as wounded. Consequently, in the Iraq war, between 2003 and 2011, the ratio in the generously resourced US military was almost nine to one; in Afghanistan, almost ten to one. Those ratios, the highest ever achieved in a major modern war, were due in part to ensuring that wounded soldiers received critical care within 60 minutes of injury, the period known as the "golden hour," and this through the deployment of more surgical teams and the acceleration of medical evacuation.

The question is to what extent all this applies in the case of Russia. In Iraq and Afghanistan, the United States made extensive use of helicopters for medical evacuation. That recourse becomes more difficult when helicopters are frequently shot down, as they are in Ukraine. And presumably the United States would face the same problem in comparable circumstances. In an article co-authored with several military doctors and published in 2018 in the online journal War on the Rocks, Fazal noted that the simulations showed that treatment in the golden hour would be much more difficult for the United States in a peer-to-peer confrontation or almost even. A war against North Korea, for example, would require the evacuation of casualties equivalent in number to those suffered by the United States in all of its conflicts in the previous 17 years (including Iraq and Afghanistan) "over a period of months, if not weeks." ". Even America's medevac capabilities would be overwhelmed in such a situation.

And those of Russia are more rusty. Their military medicine is "less developed" than that of their Western counterparts, says Ronald Ti, an expert in military medical logistics at King's College London (KCL); and presents special weaknesses in battlefield trauma medicine by paramedical personnel. The emphasis (as in many former Soviet republics, including the Ukraine) is on sending the wounded to doctors in hospitals located in the rear areas. "That's all very well," says Ti, "but the result is casualties turning into deaths due to long evacuation queues."

It is evident from Western figures. According to Burns and Marran, Russia has suffered three times more injuries than deaths. The relationship roughly matches documents seized by Ukraine and analyzed by Rob Lee of the KCL and Michael Kofman of the CNA think tank. The documents refer to losses suffered through mid-March by the 1st Tank Army, a key Russian offensive formation. They point to a ratio of 3.4:1, which rises to 4:1 if missing soldiers are counted as dead. This latter proportion is very close to that reported by the militias of the Donetsk People's Republic, which, unlike the Russian army, have accurately documented their casualties. Keep in mind, says Kofman, that the proportion can decrease if wounded soldiers die, but increase in the event that artillery (a weapon that wounds with shrapnel) dominates the battlefield, as has happened in recent months. .

All of these calculations may seem arcane. However, the specific ratio chosen has important repercussions on the judgment about the deterioration of the Russian army, a key parameter in a protracted war of attrition. The choice of a 3:1 ratio by the US and Estonian intelligence services indicates that 60,000 Russian fighters have been withdrawn from the battlefield, although some soldiers wounded in February or March may already have recovered.

By contrast, if Wallace's death toll is correct, some 100,000 soldiers will have been pulled out of combat at one time or another. And it would reach a staggering 125,000 soldiers (equivalent to the entire ground combat force with which Russia began the war) if Ukraine's new Western artillery had increased the ratio to 4:1. That multiplier effect makes very high estimates of Russian deaths less plausible, argues Kofman. If total casualties were drastically higher than the figures given by the Americans and British, the Russian military would clearly be in even more trouble a long time ago.

Yet Russian losses on that scale explain why so many Russian battalions are severely understaffed, why their advance in Donbas has been so slow, and why the army is building up volunteer reserve battalions across the country. If Ukraine mounts a large-scale counteroffensive in southern Kherson province in the coming months, the line of Russian forces will become even thinner. In addition, the officers who lead the army have been particularly affected: "thousands" of lieutenants and captains and "hundreds" of colonels have died, according to a US official on July 22. It is no surprise that the number of troops refusing to fight is in the thousands, says another source.

For Russian President Vladimir Putin, the saving grace may come from the fact that so far there has been no serious domestic reaction to such a drain on lives. "They are not middle-class youngsters from St. Petersburg or Moscow," notes MI6's Moore. "They're poor kids from rural Russia. From the working class towns of Siberia. They come disproportionately from ethnic minorities. That's their cannon fodder."