Despite the entry into force three months ago of the decree-law of the Generalitat that severely restricts the operation of rental cars with drivers, the large digital platforms that offer this type of vehicle with VTC licenses as if in truth were taxis continue to work in Barcelona and its metropolitan area as always. 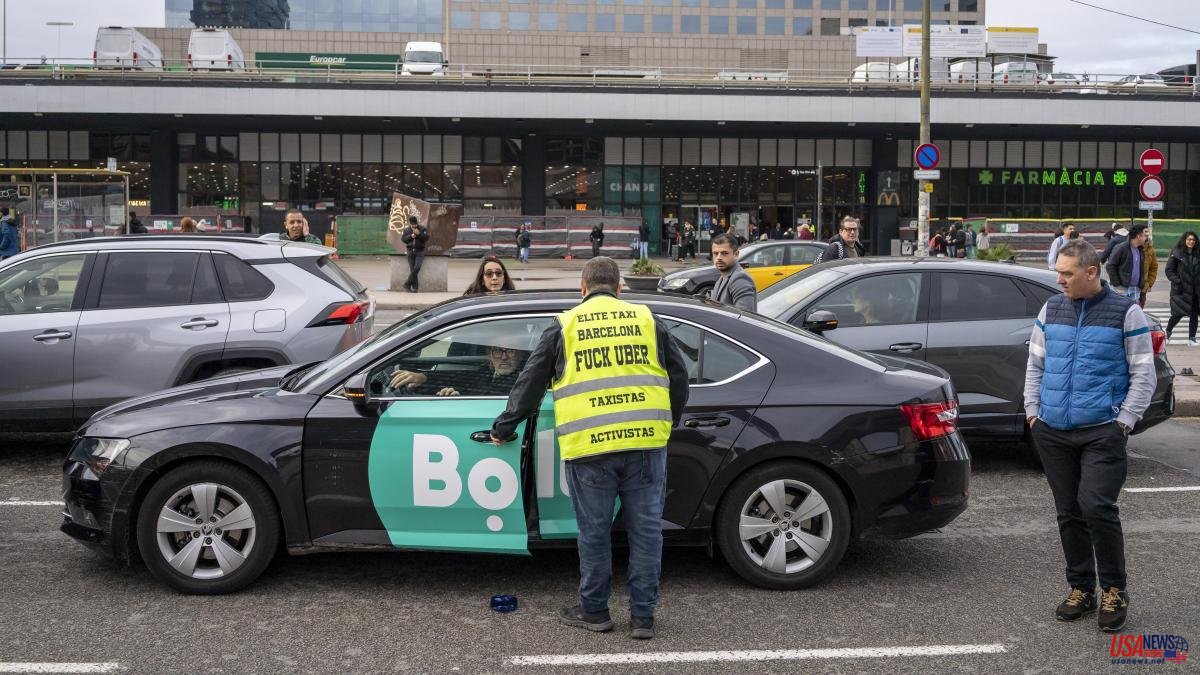 Despite the entry into force three months ago of the decree-law of the Generalitat that severely restricts the operation of rental cars with drivers, the large digital platforms that offer this type of vehicle with VTC licenses as if in truth were taxis continue to work in Barcelona and its metropolitan area as always. On December 31, the term to regularize the licenses that meet the new requirements ended. This sieve reduces the 4,000 permits that worked in Catalonia before the new framework to about 600.

The taxi drivers demand that the administrations wake up as soon as possible, that they force Uber, Cabify and Bolt to abide by the rules, that the Urban Police and the Mossos d'Esquadra begin to fine offenders, that they put an end to this confusion. It seems as if the new scenario had arrived without anyone –except the taxi drivers– noticing it. And he sees that all those involved came to think about it for years.

To remember that things have changed, about twenty rather fed-up taxi drivers set up a picket in front of Sants station on Tuesday. Some already have a list with the license plates of the more or less 600 rental cars with drivers that have already obtained permission from the Institut Metropolità del Taxi (Imet) to continue operating in the metropolitan area or that are pending some fringe to solve in brief.

The taxi drivers' patience ran out as a long succession of vehicles bearing the Cabify and Bolt logos dropped their customers off in front of the station. None of the license plates of these vehicles were on his list. About a thousand rental cars with drivers work with these applications.

"What you are doing is illegal from day 1," the taxi drivers snapped at the drivers. “The fine is 4,000 euros, and they will put it on you; Not to Uber, but to you, do you understand? And the drivers questioned replied that they know nothing, that the managers of the fleets for which they work – which in turn agree with the large digital platforms to offer their services through their applications – only told them to go out to work as usual and bring money. "Fuck, I break my back eleven and a half hours a day, and I've barely been at this for a month, I need a job!" “They changed my car and they told me that I could work with it without any problem”. Don't come to me... you are not the law!

Yes, there were some moments of tension, they even punctured a tire... But it was the arrival of the Urban Police and the Mossos d'Esquadra that ended up exasperating the picket taxi drivers. None of the agents in question was aware of the entry into force of the new decree law, none had received the pertinent instruction from the City Council, the Barcelona Metropolitan Area (AMB) or the Generalitat, none knew what had to be done. to do...

Although municipal sources assure that controls are being carried out to guarantee compliance with the decree law, none of the agents who traveled to Sants had the list of authorized VTCs that many taxi drivers already drive. Faced with this situation, those on the picket line in front of the station decided to hold an assembly of the sector right there tomorrow, Thursday, in order to decide which protests to carry out imminently "and stop this armed robbery of the platforms."

In the Department of Territory, author of the new legal regulations, they consider that they have already done their job a long time ago and now who must ensure compliance with the law is the IMET. The president of the organization and councilor for Mobility of Barcelona, ​​the socialist Laia Bonet, picks up the gauntlet: "We will work to guarantee compliance with a decree that advances the objective of making Barcelona a benchmark in public services and quality jobs" .

The large digital platforms, for their part, understand that the new decree law of the Generalitat is leaking, that the courts themselves will knock it down in a few months, that in reality they are not doing anything illegal... The owners of the VTC licenses consider that the permits issued less than four years ago have not yet exhausted the extension granted by the central government with the aim of compensating them before allowing the autonomous communities to restrict their activity.

In addition, on this side of the trench, everyone thinks that the recent non-binding opinion of the lawyer for the Court of Justice of the European Union who censors limiting the number of VTC shows the fragility of the rule. So Uber, Cabify and Bolt continue to operate in Barcelona as usual, dodging pickets from taxi drivers.