Boato, lukewarm applause, which lasted almost seven minutes, and many familiar faces at the official opening of the Real 22/23 season. 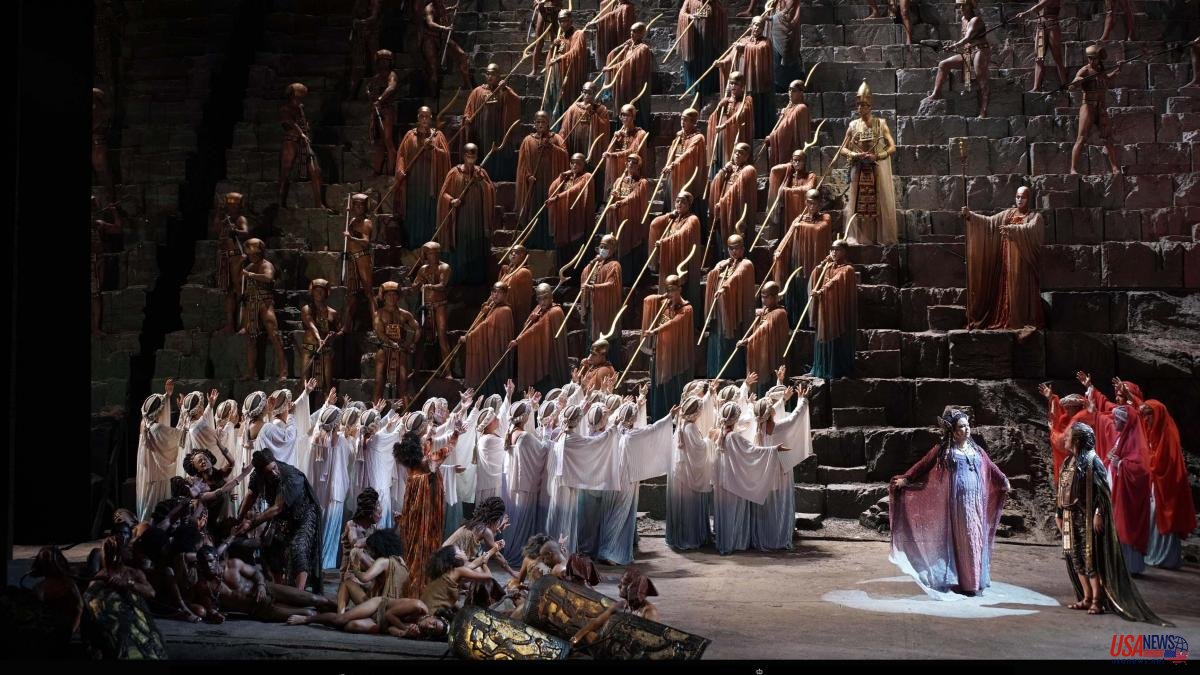 Boato, lukewarm applause, which lasted almost seven minutes, and many familiar faces at the official opening of the Real 22/23 season. The most famous title of Italian opera by its most famous composer, Verdi's Aida, in a classical production, signed by Hugo de Ana and premiered at the Real in 1998, which has been recovered here from the theater's wardrobe with all the traditional ingredients of a papier-mâché staging. And with one use of makeup that wants to run away from blackface.

The famous Verdian trumpets that the composer himself invented for this opera, seeking an archaic and supposedly Egyptological sound, could have sounded with the triumphal march to the sound of the entrance of their Majesties the King and Queen of Spain, who for five seasons have always presided over the inaugural performance of the Teatro Real season, underlining the name of the Madrid Coliseum.

The list of personalities, politicians or celebrities was typical of the date. The president of the Congress, Meritxell Batet; the Minister of Culture and Sports, Miquel Iceta; or the director of the INAEM, Joan Francesc Marco, covered the Catalan quota of authorities, together with the president of the Community of Madrid, Isabel Díaz Ayuso; the Mayor Martínez-Almeida, or the spokesman for the PP in the Senate, Javier Maroto. A trio of notables in the absence of the now ubiquitous Alberto Núñez Feijóo, who missed out on a smiling Esperanza Aguirre of social scene stealers.

The Executive President of Telefónica S. A. José María Álvarez-Pallete, whose company sponsors the production of this operatic title, and great media directors, such as Ignacio Ybarra, President of Vocento; Asís Martín de Cabiedes, President of Europa Press, or the ever-present Pedro J. Ramírez, from 'El Español'.

Among artists and celebrities, it was possible to see Álex de la Iglesia, who seemed to come directly from the Salón del Cómic; the musical director Pablo Heras-Casado, guest principal director of the Teatro Real; the queen of hearts Isabel Preysler, accompanied by Nobel laureate Vargas Llosa; Carmen Lomana, who never misses a premiere, or a smiling Boris Izaguirre, who, by the way, will make his debut as librettist for the contemporary zarzuela “Trato de favor”, with music by Lucas Vidal, next May at the Teatro de la Zarzuela.

All in all, the iconic music of an opera title that has it all remained. This proposal, which forms part of the heritage catalog of the Real's productions, is being revived for the third time in the history of the Madrid theatre, this time with twenty-one performances, more than ever in the history of the Real. A lyrical party that is recognized as a self-tribute, a term designated by Joan Matabosch, artistic director of the Coliseum, in his always stimulating article in the playbill. Renovated the entire floor of the stage, after more than two decades of use, the premiere shone with golden reflections of other times in this production that evokes times of past productions.

Hugo de Ana uses all the clichés of the imagery of a historicist Aida of lyrical tradition, with some video projection to enhance with a slight 3-D effect, a

costumes and scenery, formed by himself, with all the Ethiopian wigs and dreadlocks for the Egyptians imaginable.

A production without surprises, ultra-conservative and with a vintage aesthetic concept that will supremely bore lovers of imaginative and innovative productions.

On this occasion, a slow and too self-contemplative baton from Nicola Luisotti, associate director of the Teatro Real, embalmed Verdi's opera in an oratorial halo tending towards tedium. Languid and heavy tempos that gave the undisputed triumph to the voices.

Cast of bells that would sign the New York Met itself, where the timbre beauty and full vocal state of the Polish Piotr Beczala, the best lyrical tenor in the world today, overwhelmed with his latest new role, debuted this summer at the Salzburg Festival .

At his side, the veteran and great lady of singing, the Bulgarian Krassimira Stoyanova, making her debut in Madrid at last!, chiseled an Aida of admirable vocal nobility, phrased with extreme taste, delicate and preciously charming, despite being covered several times by an orchestra that failed to find a balance with the stage in terms of volumes.

The Spanish baritone Carlos Álvarez is always great, making his debut in a new role, as a vocally impeccable Amonasro with full lyrical accents in the great tradition of the best baritones from Verdi.

A certain disappointment with the Amneris of the powerful mezzo Jamie Barton. Although the instrument is sonorous and has attractive bass colors and powerful trebles, the broadcast sounded harsh and, above all, it lacked the essential Italianità in one of the best scenes for mezzo written by Verdi.

The Ramfis of the bass Alexander Vinogradov was sonorous and left over next to an apparently vocally affected Dejan Vatchkov, with a trembling voice and elusive treble.

The level of the choir looked properly under the direction of Andrés Máspero, not so much a ballet of strange choreography signed by Leda Lojodice.

The party for this Aida will be completed by three different casts, where the name of Anna Netrebko stands out, the Russian diva on her return to Spain. After finally positioning herself against the invasion of Ukraine, she claims her dual Austrian nationality to return through the front door of poetry away from political controversies. The diva promises to add power and passion in a role that is always a challenge and an achievement for any self-respecting lyrical soprano. We will see it this Tuesday.