Vingegaard puts the finishing touch on the mountain of the Danes

The mountain of the Danes. 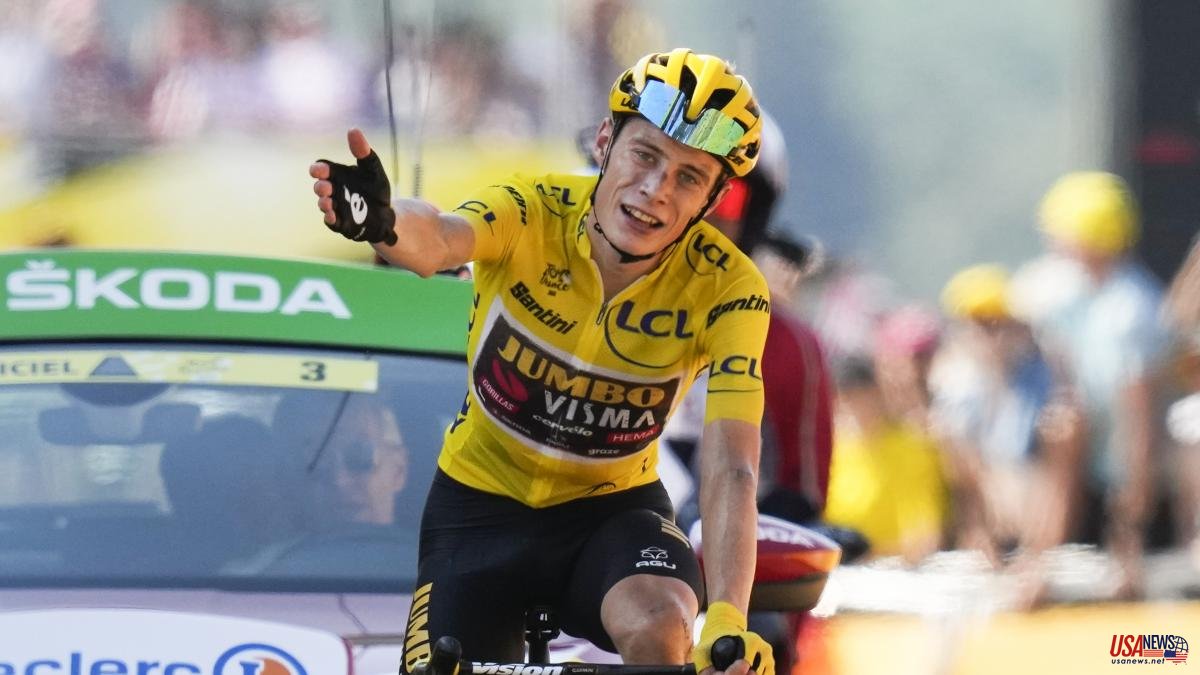 The mountain of the Danes. Hautacam is already the favorite port for cyclists in the Nordic country. As the Alpe d'Huez is of the Dutch. The peak of the Pyrenees, where Riis won in 1996 to seal his victory in Paris - the first Tour for Denmark -, is going to become a place of pilgrimage for fans of Jonas Vingegaard. The Dane from the Jumbo caresses his first yellow round after his exhibition in Hautacam, the port of the Danes from now on. He not only put up with Pogacar, the irrepressible Slovenian, whom he forced to force the machine so much that he fell. It is that he waited for him sportingly, shook his hand, and let him recover. Then, on the last climb, he tore him apart. He dealt her the coup de grâce.

Vingegaard will be the fair winner because he was the best in the two toughest stages, the Galibier and Granon and the Spandelles and Hautacam. He has been the ruler of the Alps and the Pyrenees. He won both although in neither did he raise both arms. In the first he wore yellow and laid the foundations taking almost three minutes from his opponent. In the second he not only defended himself as before but also went on the attack again to crush his great threat, to put him in for another minute. The applicant has champion material.

Two devastating attacks have been enough for him. Dry, merciless. Nothing to do with the many efforts that Pogacar has spent, that he was going to bite, that he has spread over and over again without being able to do damage, to open distance. The leader has not wasted his strength. He has chosen the right moments with the delicacy of a goldsmith while the Slovenian tried it in vain day in and day out.

The Dane will face the last time trial with an advantage of three minutes and 26 seconds, which leaves the penultimate stage without emotion. It will hardly be with Roglic's face in 2020. He has minimized Pogacar.

Not without suffering. Not without a scare. Not without a champion gesture. The Slovenian was a second with greatness. He was too cocky at the Galibier responding in person and without differentiating between Roglic and Vingegaard. He took too many risks on the way down from Spandelles, where he went down on a left-hander after making as many as five changes of pace going up the unprecedented climb.

The story could have been different. Because a few corners before it was the leader who was close to having an accident. Pogacar was forcing the machine, looking for a weakness in the leader, who wanted to hit the pedals early in a corner and hit the ground with the pedal. The bike bounced him but he managed to control it.

On the other hand, Pogacar's wheel slipped on the gravel and he was unable to save the fall. He got up quickly and started walking. He found a leader who was waiting for him in a gesture that honors him. He did not want to take advantage of the misfortune. "He deserves to be called champion because the whole world has seen that gesture," summed up Mauro Gianetti, manager of UAE, the Pogacar team.

The two rivals shook hands, in an iconic image, like that of Bartali and Coppi passing a jerry can at the Galibier in 1952, which is still being talked about 70 years later, or Anquetil and Poulidor, shoulder to shoulder, at the Puy de Dôme in 1964. The battle of Vingegaard and Pogacar has been at the height of the greats, although the Slovenian has lacked help before the exultant power of the Jumbo

Vingegaard will win the race but no one has been more decisive than his teammate Van Aert, who started as soon as he started to try to form the day's breakaway, who was in the lead the entire stage and still had the strength to pull the leader when they caught up with him. When he saw it, Kuss understood that his presence was no longer necessary, that his contest was over. The Belgian, yes, the green jersey, set a pace that finally broke Pogacar in Hautacam.

With 4 km to go, the Slovenian said enough is enough. The double champion could not more. It was impossible for him to follow Vingegaard and a Van Aert who was preparing the ground for the attack of his leader, the leader of the Tour, the future winner. The Dane left alone, crossing a river of people in the Danish mountains. Pogacar had abdicated.