Vingegaard does not give up even half a second against Pogacar

The Tour is first won with the mind and then certified with the legs. 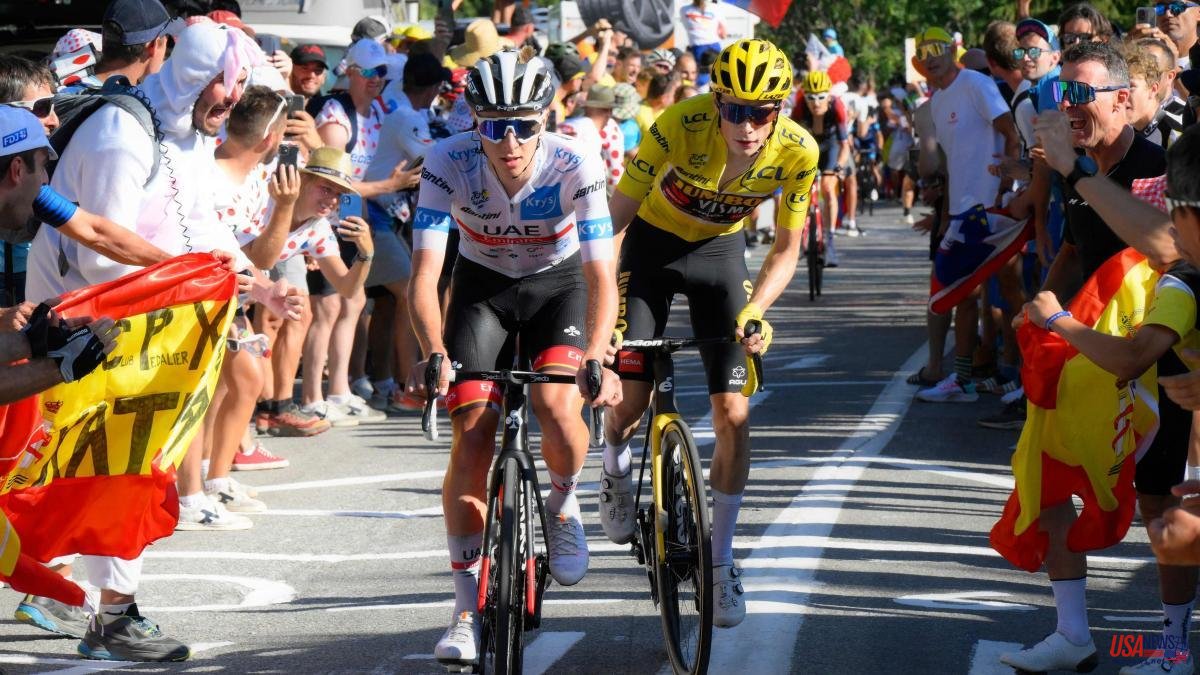 The Tour is first won with the mind and then certified with the legs. The struggle of psychology is as important as that of the road. Pogacar knows it, that last year he constantly ate the morale of his rivals, the same thing he was doing in this one until he crossed him and the Granon choked. Jonas Vingegaard has internalized it well, to whom in the hotel at dinner, on the bus during the tactical talk and by earpiece during the ascent of Alpe d'Huez they did not stop repeating that he only had one objective: to resist. That it didn't even occur to him to lose the Slovenian's wheel, that he wouldn't let him grow, that he wouldn't give him a meter, that he couldn't give him the slightest chance to recover.

That's how it went. Not a second, not half a meter, not even a tube separated the leader from the double champion. He didn't give it a go. He did not allow her to get back on the train. He kept it at bay, in the most cerebral and disheartening way there is. Always stuck, being the shadow of him. What the general of the Tour has brought together that the Alpe d'Huez does not separate.

Pogacar acted as expected of him. It was the spitting image of a wounded lion. He was singing, writing and telegraphing that the Slovenian would attack the day after his collapse sounded. He wanted to show that his sinking was a bad day, a human error due to his feeding himself in conditions and on time. He wanted to turn the page right away, just like Enric Mas, responding with the best, making the rubber with Thomas when Pogacar tested the leader.

Pogacar, instinctive, wanted to serve hot revenge. And, how can it be otherwise, they were waiting for him around the corner. Three times the head of the UAE ranks started and in none of them did any damage or path. Not Vingegaard, as good a climber as he is. He accelerated, he stood up but when he turned his head there was the yellow jersey of the leader of the Jumbo. Unalterable and impassive. Inseparable.

The first time was five kilometers from the top, curiously the same scenario as in the Granon. In that space, the Danish took almost three minutes to the Slovenian. Instead, Pogacar's loot is less than petty and meager. It was zero. It served him, yes, to climb to second place and unseat Bardet. And nothing more. He was like a toast to the sun. Facing the gallery. The Slovenian can say that he wants to fight and it will be very true. As much as Vingegaard is full, no cracks are visible and he has a great team at his service: a Jumbo that carried Kruijswijk and Kuss, the mountain gregarious, who had barely worked on the Croix de Fer before the last upload.

“Tadej has attacked me. It was what he expected. Fortunately, I was able to follow him. I didn't feel bad today but we all suffered from the heat”, analyzed the leader. A heat that still rose a couple of degrees with the crowd of Alpe d'Huez on July 14 where he won an Ineos again, Pidcock, like his teammate Thomas in 2018, the last time he arrived.