Vinícius hints at his renewal with Real Madrid

Real Madrid has had a historic season with the conquest of the Champions League and La Liga, a success largely achieved by Vinícius, who this past year has considerably increased his performance with 22 goals and 20 assists. 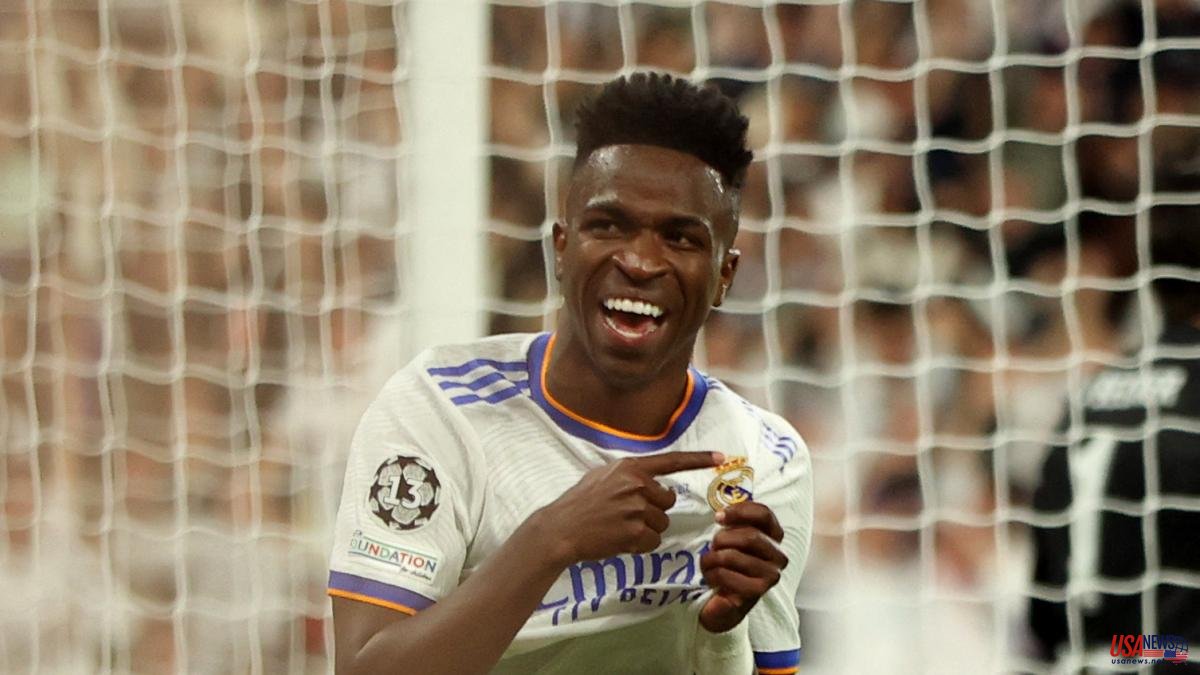 Real Madrid has had a historic season with the conquest of the Champions League and La Liga, a success largely achieved by Vinícius, who this past year has considerably increased his performance with 22 goals and 20 assists. The Brazilian, in white since 2018, has no intention of changing scenery beyond 2024, when he ends his contract.

"I will continue in the biggest club in the world," he said during an interview on his country's television program Bem, Amigos! from SportTV. The striker is in negotiations to extend his relationship with the whites, which would already be advanced according to what Marca has reported. He would go from collecting almost 4 million with a bonus to about 10 million and would have a termination clause of 1,000 million.

"This has just begun. I have many things to gain. I hope to be able to tell a lot of things at the end of my career," explained Vinícius, who according to some media outlets had been tempted with an important offer from PSG so that he would not accept the renewal offer from the whites. "It is the most united team since I arrived. We all felt something special in the celebrations," he said about his happiness in the Madrid entity.

Far away are the football differences with Benzema, who in 2020, in an audio captured by the cameras, advised Mendy not to pass the ball to Vinícius. "Nothing happened. Karim is very fond of me. He always did everything possible to help me. The next day he came to talk to me, he said it wasn't that," he forgave the Frenchman, his best partner this year up front.

"In Madrid the pressure is very great, but I had the help of Benzema, Marcelo, Casemiro, of players with more experience. I was always evolving. This season went well, so the normal thing is that the next one will be better", he insisted on the help of his teammates since his arrival in Madrid at just 17 years old.

But above all, the arrival of young people in the locker room stands out: "Younger people arrived with Rodrygo, Militão, Camavinga and me. Everyone likes each other and that's important." He also highlighted the role of Carlo Ancelotti, a coach who always "tries to help", even when he has to criticize some aspect of the game.

"They talk to each other to reach an agreement when there's a match. Sometimes, he asks to get me out of one match or another. I'm doing better at Madrid and Tite asks Ancelotti how he could help me with the National Team. They get along well and understandable," he added about the relationship between the Italian coach and the coach of a Canarinha team where "the best atmosphere in the world" is breathed. "He tells me to celebrate the title really well, and then it goes by quickly," revealed Ronaldinho's advice to Vinícius, who described Neymar as the "best player" of the Brazilian team.