Video shows teacher ranting about students being "vectors for disease"

In an introduction video for a class at a Michigan university, he repeatedly used profanities. He said that he assigns grades randomly before the first day of class, and called students "vectors" of disease. 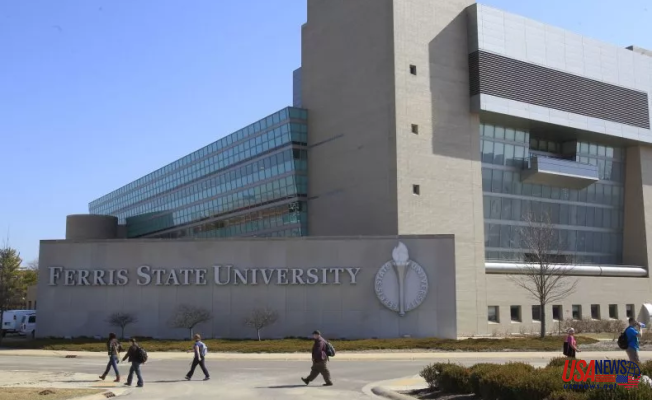 Ferris State University reported that Barry Mehler was a professor in the humanities at the school and had been placed on leave while investigators investigate his conduct. WDIV-TV also reported.

The video is 14 minutes long and was uploaded to the professor's YouTube channel. It has received more than 216,000 views by Friday morning. Mehler first appeared on camera wearing an astronaut helmet and a mask underneath.

He took off the helmet and mask and began to discuss the dangers and effects of the coronavirus.

"I don’t know if you have noticed that it's dangerous for people to breathe in the air. Many experts recommend wearing masks to prevent the spread of a deadly virus. Your civilization is in decline and your planet's life is at risk. He said that it was possible you didn't notice but the suffering on the planet is increasing exponentially.

Mehler explained that he intended to wear the helmet to protect himself against COVID-19 when classes begin in person. He also said that he didn't want to be "anywhere near" his students.

Mehler stated that "you people are just vectors for disease to me," and added that students should talk to him over Zoom if they want to.

He continues to discuss how he grades his classes.

Let me put your mind at ease. There is nothing you can do, so there's nothing to worry about. He said that you have no control over what grade you get.

Mehler stated that his grading system was based on the Calvinist doctrines of predestination.

"I decided that if it was good enough to Americans, it would be good enough to me. They didn't lose because of their failures. They tried everything, but nothing worked .... "It's all predestination and you all are predestined for losing just like the Indians," he stated.

He used profanity to refer his students and stated that none of them were "good enough to earn an A" in his class.

"So, I assign random grades before the first day ..... I don't even care to know your name. I simply look at the number, and then I assign a grade. This is how predestination works," Mehler stated, adding that students should not complain to God.

He later explained to his students that all the information needed to earn an "A" was available on a class web site.

Mehler also criticized the school for requiring professors to be present at classes. He noted that Mehler will turn 75 in March and is therefore at greater risk from COVID-19. He urged students to not attend classes in person and said that his lessons were designed to be delivered remotely. Students will not be able to ask him questions because he'll be wearing a helmet.

Enjoy the show. Because I don't have any choice, I will be there every day. He said that you, on the contrary, have a choice."

David Eisler, University President, stated Thursday that he was shocked and appalled by Mehler’s video.

Eisler stated that the content was "profane, offensive, and disturbing" and did not reflect the university's values.

Mehler's Ferris State teacher profile said that Mehler's expertise included the history of science and eugenics as well as racism and science.

Newsweek reached out to Mehler in order for comments.