Verstappen underpins his two-time championship and Sainz signs the feat of the day, from 19th to 5th 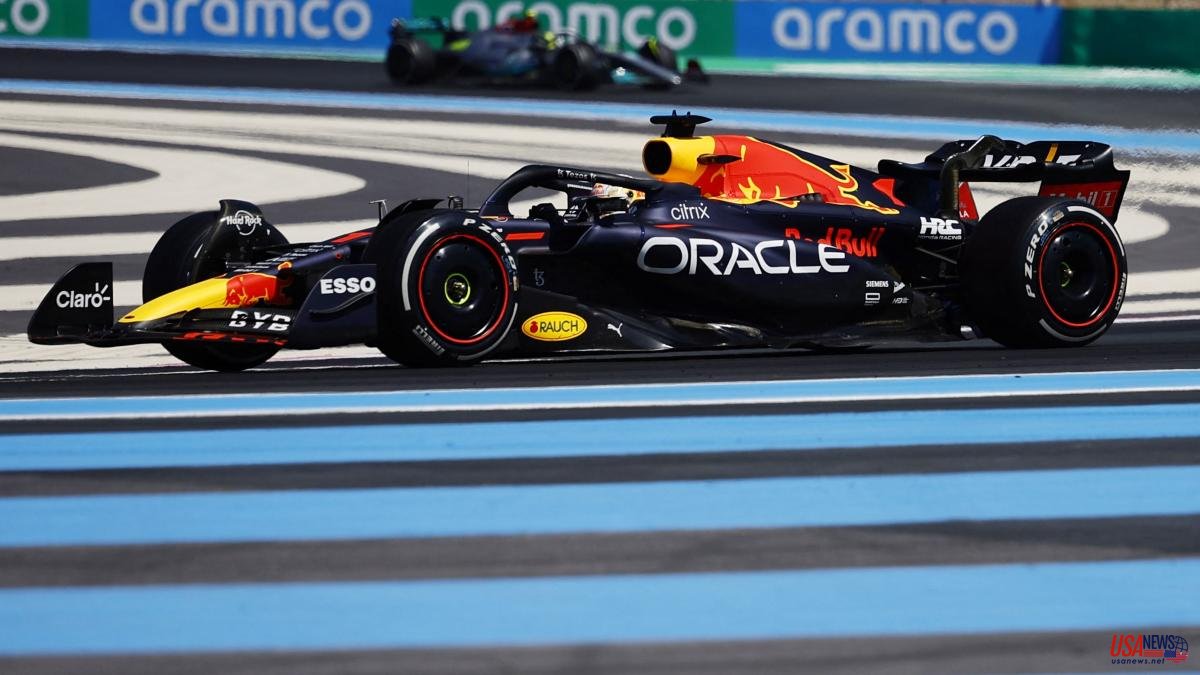 Max Verstappen begins to build his two-time world championship. The Dutch Red Bull driver won with authority in the French GP, helped by Charles Leclerc's retirement due to a piloting error, and has already accumulated 63 points for the Monegasque. His triumph, seventh of the year, was overshadowed by the heroic comeback of Carlos Sainz, who was left without the deserved prize on the podium: the Madrid native climbed from 19th place, penultimate on the grid, to 5th, after arriving to recover 20 positions.

The clutch did not fail Ferrari this time and Leclerc had a clean start to maintain first position in the face of harassment – ​​not very incisive – by Verstappen, second. Then, third, Hamilton slipped in, faster starting than Checo Pérez, although the Mexican in the first four laps crushed the Mercedes, slower at top speed.

The Englishman dropped from the first two to almost a second per lap. Even so, he kept third place well in search of the fourth podium followed by him. Lewis's maneuver had its impact: he disconnected the two Red Bulls, so he lent a hand to Leclerc, who avoided the strategy of the two bulls to attack him.

The one who jumped the most at the start was Fernando Alonso, from seventh to fifth, bravely winning the positions of Norris and Russell in the first two corners. However, due to mechanical superiority, the Englishman from Mercedes snatched 5th place from him on lap 5 and the Asturian found himself chased by Norris, without too much harassment.

Carlos Sainz, who was riding hard tires when starting penultimate (19th) due to the penalty due to the change of engine elements, only gained one position at the start, ahead of Magnussen. But the man from Madrid, in climbing mode, knew that he had to gain ground without delay: in five laps he had already climbed to 13th place, due to his greater speed than the caboose cars, the Williams, Alfa Romeo or Alpha Tauri . On the 13th lap he was already in the points zone, after overtaking the two Aston Martins: 8 cars passed in 13 laps. The podium was far away.

The French race soon perked up. Verstappen launched his first attack on Leclerc already on the sixth lap, to weigh his strength. The Monegasque protected himself well defending the position. He insisted on the next lap, he had the Ferrari at 3-4 tenths, he put pressure on it, forcing the error and at the same time seeking to accelerate the wear of the tires of the red car, which degrades worse than the Red Bull. Leclerc held on solidly and the Dutch offensive was diluted in a few turns.

Red Bull made a move before Ferrari. He stopped Verstappen on lap 17 to ride him hard and push hard. Undercut attempt to gain position from Leclerc.

But he could not check if the move had an effect because Leclerc threw his leadership overboard in an unexpected theatrical blow. Leading the way on lap 18, he lost the car behind in the fast corner due to an alleged problem with the throttle. The Monegasque erupted in a scream of rage after crashing into the tire barrier. Safety-car and overturn in the race. Almost everyone took the opportunity to change tires and the classification was readjusted: Verstappen took the lead, followed by Hamilton, Pérez, Russell, Alonso was fifth, Norris, Ricciardo and Sainz in eighth place.

When the safety-car retracted, Sainz attacked Ricciardo and Norris and won sixth place on his medium tires (the only one with them, the rest on hard). One lap later he also ate up Alonso's box and the man from Madrid was already fifth. The podium was getting closer. He only had Russell and Pérez in front of him… and a 5-second penalty for “unsafe entry” when leaving the pit-stop. The lousy stop in which he lost some precious seconds made him go out to the pit-lane without looking and almost ate a Williams. The punishment would cost him the podium options.

Sainz was incandescent. “But I'm faster than all of them”, the man from Madrid encouraged, wanting to continue making up ground – he had gained 14 positions – and get closer to the podium. His next victim was Russell's Mercedes, which he masterfully devoured with an "out" at the Signes curve, one of the fastest in the championship, which is usually drawn at more than 300 km / h. He was already fourth (v.31), with 22 laps to go to attack Pérez's podium, about 3 seconds away (plus the pending 5s penalty).

Sticking to his medium tires (with the same number of laps as his hard rivals), Sainz closed the gap and caught up to the rear of Perez's Red Bull with 15 laps to go. He had it within range, but the tires were at stake. On lap 41 he launched his first attack, one from the outside to which the Mexican responded, but on the next he cooked it and passed it bravely on the inside. He was already third.

One lap later, Ferrari made the key decision: keep Sainz on the track for 11 laps with very worn medium tires, or make him return to the pit-stop to give him new rubber. He opted to change his tires – the new medium one – and served his 5-second penalty, but he reappeared on the track in ninth place. He had another comeback with 10 laps to go.

The hunt for Carlos against the clock and laps began: Ocon fell to be 8th, on the same lap he ate Ricciardo, he was 7th; With 7 laps to go, Norris was given the best lap of the race (6th) and immediately he easily overtook his friend Alonso. He was already 5th. The next port of his was, 22 seconds away, a Russell who was chasing Pérez looking for the podium. It wouldn't be easy for Carlos. A 'virtual safety-car' ended up frustrating the attempt to attack the podium. His feat, the 20 positions gained (16 first and 4 later), was left without the prize of a podium that he came to savor one lap.

The fight for victory did not exist. Hamilton remained solid in second place but lacked the pace and speed to attack Verstappen, who had nearly 6 seconds to go in the final 20 laps. The Dutchman easily added his seventh victory of the course, with which he jumps into the lead by 63 points from Leclerc, more than two races apart. The bichampionship begins to go down.