Verstappen leaves the title sentenced at home with his 10th victory

Max Verstappen took a bath of orange masses in his home grand prix with an unappealable victory, the tenth of the season, with which he leaves the two-time championship sentenced: 109 points already takes Charles Leclerc, third, with seven races to go ( 175 at stake, not counting the best laps or the pending Sprint race). 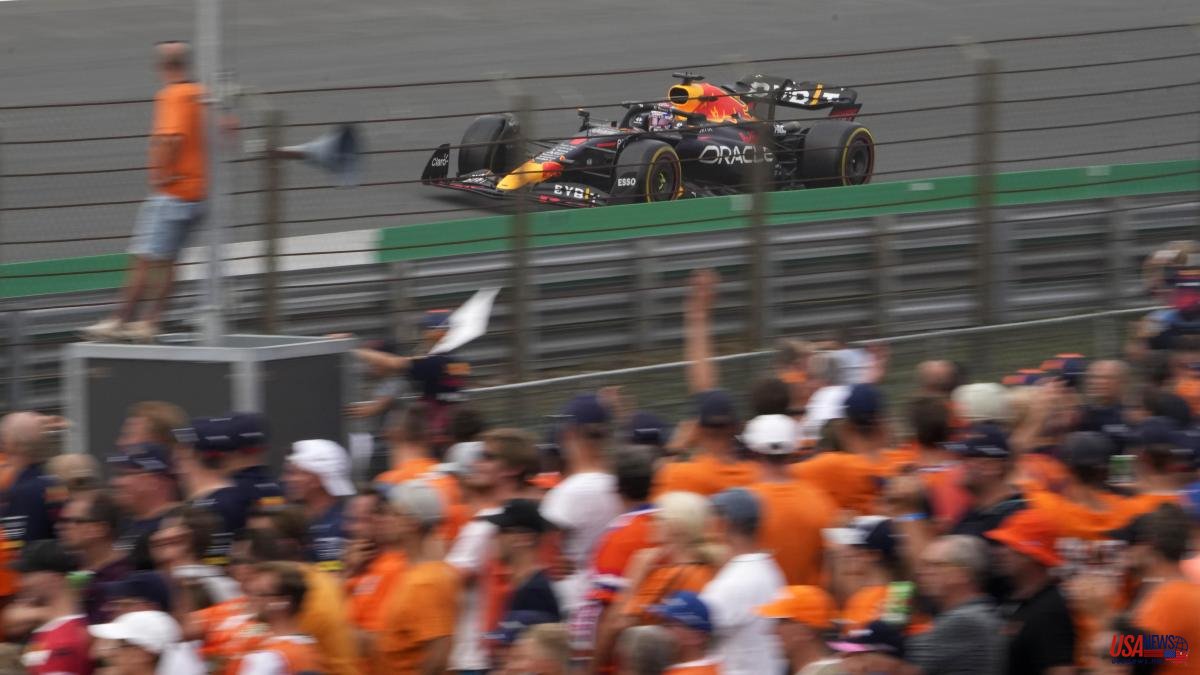 Max Verstappen took a bath of orange masses in his home grand prix with an unappealable victory, the tenth of the season, with which he leaves the two-time championship sentenced: 109 points already takes Charles Leclerc, third, with seven races to go ( 175 at stake, not counting the best laps or the pending Sprint race). Ferrari, with another disaster at Carlos Sainz's pit-stop, throws in the towel.

At the start, Verstappen closed the door well on Leclerc to maintain the privilege of pole position, and Sainz touched Hamilton – with mediums – at turn 1 to maintain third place over the Englishman. The leader of the World Cup undertook the flight in search of victory. Alonso did not progress from 13th on the grid, suffering a whiplash in the Alpine, as did his teammate Ocon, from 12th to 9th.

In the first laps, Verstappen could not consolidate the advantage over Leclerc, who remained close, at 0.9 seconds (v. 6/72), while Hamilton was a shadow on Sainz's neck, a continuous threat of his third podium position.

It was going to be a tire management race with so many laps (72) and a high temperature. So Verstappen progressively increased his lead, which was 2s over Leclerc on lap 12, keeping the Monegasque out of range with DRS. Sainz lost options by falling 6 seconds behind the Dutchman, with Hamilton getting closer and closer.

Sainz had just wrecked his career with a calamitous pit stop. On lap 15 he stopped to put on the medium tires, but his mechanics did not have the rear left wheel ready, so the man from Madrid was stopped for 12.7 seconds. One more Ferrari disaster. “Oh, my God” (Oh, my God), exclaimed Carlos, who returned to the track in 9th position, having already lost the podium. To make matters worse for red confusion, Pérez stepped on the gun from the tire changer, which was left in shreds.

Ferrari stopped Leclerc two laps later, without incident, in 2.5 seconds, to attack Verstappen with the medium tire. The Dutchman stopped one lap later (3.4s) and gave the first position to the two Mercedes -Hamilton first-, both with a different strategy, with medium tires from the start.

But it was going to last him a short time in front of the two silver cars. With new tyres, Verstappen was flying and snacked on Russell (v. 28/72). And when he was going to eat Hamilton too, the Englishman stopped to put on hard tires (v. 30/72), continuing with his changed strategy that was going to put him on the podium. The Englishman was not going to stop any longer and could win the positions of Leclerc (2nd) and Pérez (3rd), and get to worry Verstappen, whom he had 18 seconds behind.

Hamilton was the driver who flew the most on the track. With his hard tires, he took his teammate Russell out of the way and melted Pérez in a spectacular duel to place third, 9 seconds behind Leclerc's second place. 32 laps to go. The Monegasque would fall soon, on lap 46, having to stop again. Hamilton was already second, 14 seconds behind Verstappen. Would he catch it in the remaining 26 laps? Couldn't know...

A virtual safety-car due to a mishap in Tsunoda's Alpha Tauri saved Verstappen from danger. Everyone took advantage of it to make a free stop, so the Dutchman saw his victory easier. Hamilton put on medium tires to tighten, but the 12.5s distance with the Red Bull was already insurmountable. “This VSC has made us dust”, Hamilton quickly read the consequences.

And the Ferraris? Leclerc was 4th and Sainz 7th after the virtual safety-car, with 22 laps to go. Alonso was 9th, although wearing a soft tire to gain positions.

The emotion returned to the race with 15 laps to go due to a breakdown of Bottas' Alfa Romeo. His car stopped at the end of the straight and the stewards decreed a safety-car, so the question arose: who was stopping to change tires?

All renewed them with soft tires except for Hamilton, who was the leader with his used medium tires with 10 laps. Verstappen, with more grip from the red wheel, had a substantial advantage to face the last 12 laps and be able to launch himself over the Mercedes. The conditions and positions of the final duel of 2021 in Abu Dhabi were repeated.

Victory was decided in a 12-lap race. Verstappen had no wait and overtook Hamilton on the straight just over the finish line, a few centimeters later. By regulation, when the safety-car leaves, it must do so after the line. He missed a beat. From there he flew to his 10th win in 15 grands prix. An atrocity.

Russell also passed Hamilton like a plane, who with inferior tires ended up giving up the podium to Leclerc. From fighting for victory to being 4th due to a poor choice of tires with the appearance of the safety car.

Sainz ended up with a 5-second penalty for an unsafe entry into the pit-stop ahead of Alonso, who he nearly ate on returning to the pit-lane at his final stop. So the man from Madrid fell from 5th place to 8th. For his part, the Spaniard finished in sixth position after a great comeback from 13th on the grid.