Carlos Sainz has never been so close to victory in Formula 1 as at the Canadian Grand Prix. 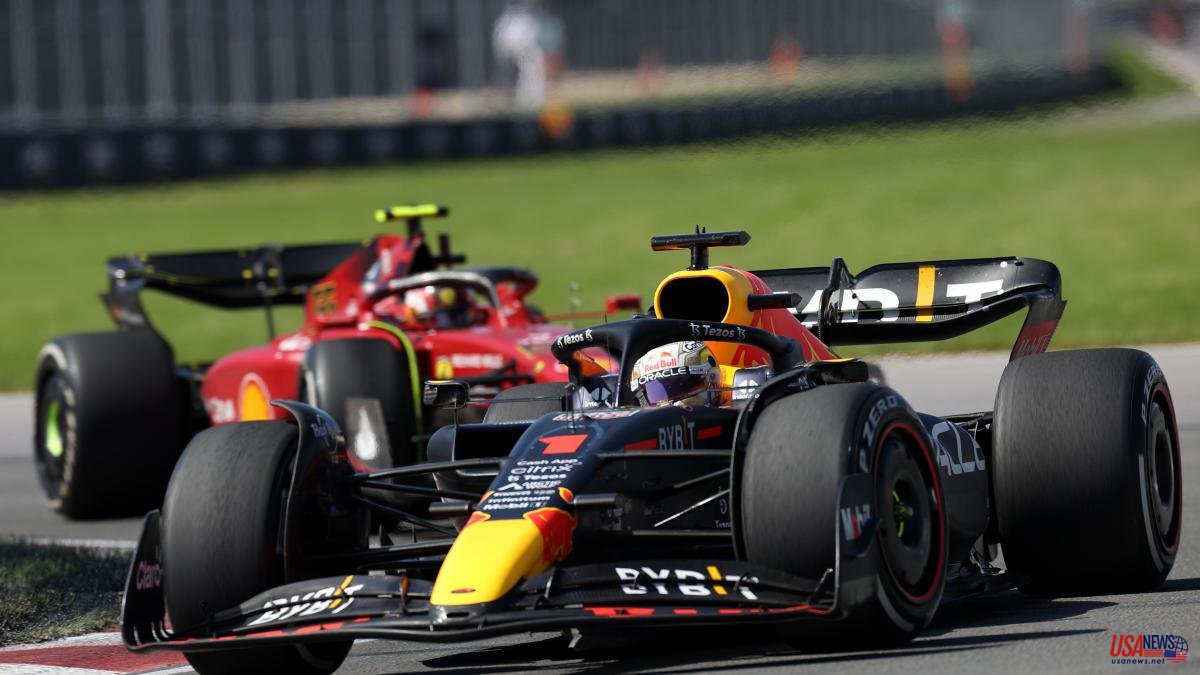 Carlos Sainz has never been so close to victory in Formula 1 as at the Canadian Grand Prix. The Spaniard was left with honey on his lips, partly due to an excessively conservative decision by Ferrari when choosing tires that were too hard for the final part of the race. Although when the one who wins is Max Verstappen, leader of the championship and with his sixth victory he stands out a little more in the Drivers' World Cup standings, there can be little surprise.

The Spaniard from Ferrari signed an unscathed career, also seasoned with strokes of fortune at important moments. Only in this way can Max Verstappen, an extraordinary competitor, be put on the ropes today. After the start, he soon overtook Alonso to slip behind the Dutchman, whose tire problems made him pit too early. From there a battle began in the distance between the two. Each stop made by one made the other take the lead and vice versa, until an accident safety car by the Japanese Tsunoda on lap 49/70 equalized everything. Verstappen went on to lead the race again and Sainz fitted new wheels, although in an overly conservative decision his team opted for hard tires instead of medium, which would have allowed him to go faster.

With fourteen laps to go, a new race began in which anything could happen. Sainz had much more pace, but Verstappen held on despite the fact that he had more worn tires. Turn by turn, Sainz enjoyed the DRS (mechanism to go faster on the straights), but with the hard tires again and again he was left half way. Finally, it was impossible for him to overtake the champion and he had to settle for another second place.

The race was also very special for Fernando Alonso. The track conditions, very wet during qualifying, allowed him to score a brilliant and unexpected second place on the grid on Saturday. He started just behind Max Verstappen and ahead of Carlos Sainz. A fantastic trip to the past if you take into account that when Alonso (40 years old) achieved his first victory in Formula 1, in 2003, he was competing on the track with Max's father, Jos, and Carlos' father was facing his last stage in Citroen.

It had been a long time since he had seen another like Alonso, but without rain the performance of his Alpine dropped a lot. Despite this, he spent 25 laps rubbing shoulders with the two youngsters who would play hand in hand for victory until the end. That yes, everything seemed to face to dream of the podium at the start of the race in which Hamilton had to stop to change the tires, the graining problems (consists of rubber chips sticking to the wheel) were a pain head for many pilots. Alonso's pace was similar to that of his rivals, but a breakdown by Mick Schumacher and the subsequent virtual safety car hurt him. All his rivals came in to change tires at that moment when less time was lost. The only one who didn't make it was Alonso, who was left with very worn wheels and a very slow pace per lap. The team decided not to enter the pits in a choice that was later shown to be wrong, as the strategy of going to a stop was not effective. After all, starting second and finishing seventh and behind your teammate is not something to be overjoyed about.

Checo Pérez (Red Bull), who suffered a hydraulic problem, did not enter the equation of the fight for the first places, but the Mercedes did, who signed a podium and a fourth place repair for the team. Hamilton held off Russell on this occasion and took his second podium finish this season. For his part, Charles Leclerc was able to minimize losses despite starting in the last positions. The last safety car allowed him to overtake Ocon and Alonso and finish in fifth position, which brings him closer to Pérez in the World Championship.