Verstappen gives a champion blow before 121,667 spectators in Montmeló

Before the 121,667 spectators who returned the roar to the stands of Montmeló, Max Verstappen imposed the law of the champion in the hottest Spanish Grand Prix in memory. 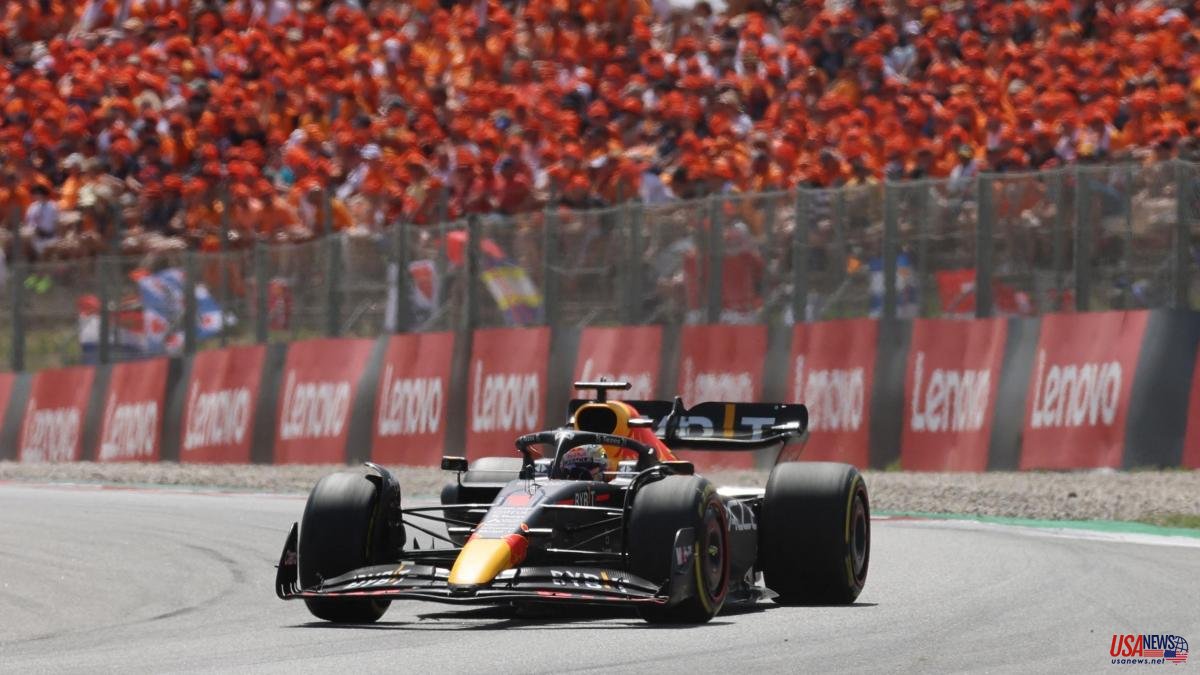 Before the 121,667 spectators who returned the roar to the stands of Montmeló, Max Verstappen imposed the law of the champion in the hottest Spanish Grand Prix in memory. Because of the temperature, with the incandescent track, the asphalt at 49ºC and almost 37ºC in the environment, and because of the damage to Ferrari, which was left without a victory when it was put on track due to an engine failure in Charles Leclerc's racing car. Without victory and also without leadership of the World Cup, which passes into the hands of the champion for the first time this year after a superb race.

The supposed battle between the two great rivals was not seen in Montmeló. Leclerc, from pole position, firmly maintained the first position in the face of fierce harassment from Verstappen, closed the gap and conquered turn 1 beforehand to start opening the gap.

There was dancing behind: Sainz started badly, was stuck a bit and was passed by Russell, third, and Checo Pérez, fourth, while Hamilton, who was sixth behind the man from Madrid, ended up going to the box at the end of the lap due to a puncture caused by Magnussen's Haas at turn four. The Englishman, winner for the last five consecutive years, was penultimate, totally unmotivated, with the intention of leaving to keep the engine.

The best at the start were Alonso and Mick Schumacher. The Spaniard jumped from last place to 15th in the first finish, five positions gained, and the Kaiser's son, from his highest starting position, 10th, went as far as 6th, although he was soon overtaken Bottas and Ocon.

The jug of cold water came in pairs at the same turn 4, with a difference of three minutes, due to the tailwind. It was first received by Carlos Sainz, who on the seventh lap suffered a spin, went into the gravel and fell to 11th place. And two laps later, in the same place, it was Verstappen who went off track, without a spin, went into the gravel and fell back to fourth place, behind Pérez, who let him pass so that he could be third and have some option to catch Leclerc.

Although the Monegasque, with clean air, without turbulence from rivals, opened the track with an advantage of 10 seconds (lap 12) over Russell and 11.3 over Verstappen. The victory was downhill, with the possibility of adding 10 more points to the Dutchman if Mercedes did not fail in second place.

The first tactical movement for the fight for the podium was carried out by Russell and Verstappen with the first pit-stop. Both stopped at the same time and cancelled, the Englishman came out ahead and the Dutchman wasted the first bullet to gain position. The most favored was Leclerc, who extended his lead over the immediate pursuer, Pérez, to more than 15 seconds.

Verstappen returned to the charge for Russell. He was on him, but when he attacked him down the straight the DRS didn't work properly. The rear wing opened but closed instantly, losing its effect and not being able to overtake the Mercedes. The Dutchman clamored over the radio. “We are not capable of doing a fucking DRS, this is incredible”, the champion cursed his misfortune, who did not stop squeezing Russell.

One of the highlights of the race was offered by Russell and Verstappen in that fight for second position. At the end of the straight on lap 24 he was thrown by the Red Bull –now with DRS in operation-, he passed the Mercedes a few meters, but at turn 2 Russell launched himself from the outside to defend his position and stay ahead. Very brave Englishman, who forced Verstappen to go slightly off at turn 3.

Although the theatrical blow of the race was reserved for lap 27 with the abandonment of the race leader and the World Championship: the Ferrari engine faltered and ruined the race for Leclerc. "No, no, what's wrong? Loss of power!”, the Monegasque howled on the radio, on the way to the box.

George Russell was at the head of the race… although for a short time. Verstappen made his second stop to put on soft tires again, and Checo Pérez became second, hunting for the Englishman. "Leave it to me," he said. And the Mexican was lethal. In just two laps he threw himself on top of the Mercedes and snatched the lead at the end of the straight, with no possibility of reaction for Russell, who became a Red Bull sandwich, with Verstappen behind, 4 seconds away, threatening his second podium drawer .

With 28 laps to go, almost half the race, the test entered a strategic phase with stops. Mercedes made a move with Russell's second pit-stop, putting on the medium tyre, and Red Bull, a lap later, followed suit with Pérez, so Verstappen (on soft) went on to lead the race (v. 38) during 7 turns, until the Dutchman made his third stop (v. 45). He returned to the track second, behind Pérez, and the disquisition was opened: what would Red Bull do? Would he force the Mexican to let Max pass?

Indeed. "It's not fair, but I'll do it", sacrificed Checo Pérez, who on lap 49 raised his foot and his teammate Verstappen relieved him at the head of the race in search of victory. "Thank you, mate" (thank you, mate), the Dutchman acknowledged the favor, who in the remaining 16 laps had no threat to score his fourth victory of the year, the third consecutive, and, by rebound, rise to the leadership of the World Cup, for the first time this season. The champion has returned.

The Spaniards closed their home Grand Prix with a good result from Sainz, 4th, by beating Hamilton on the penultimate lap; and with a good comeback from Alonso, from 20th to 9th, despite a very slow bad pit-stop. Two more points for the Spaniard, who hadn't fished since the first race.