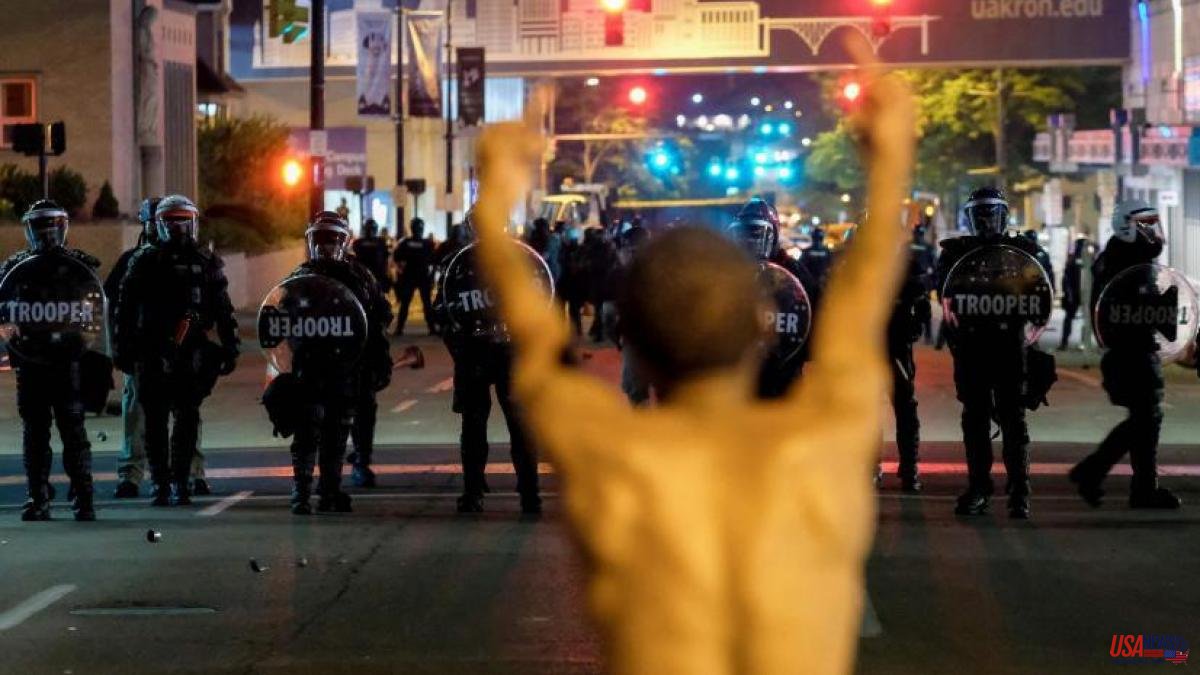 Eight Akron, Ohio, officers shot 25-year-old Jayland Walker nearly 90 times on June 27. There were sixty bullet holes in his body. The events became known last Sunday, June 3, when the police revealed the video from the camera of one of the policemen: it shows how the agent arrives at the scene in which a black man flees in terror from a car and the policeman and seven companions begin to persecute him until they massacre him with shots. At that time, the man was unarmed, like the more than 100 victims of the so-called lethal force applied by the US police in 2022 alone. Racial bias also means that blacks killed by officers are twice as many as whites. .

This is reported by the data collected by The Washington Post, which has indexed in an extensive database all the victims of said lethal force from 2015 to 2022 according to race, sex, city, state and mental condition of the victim and whether he was armed or not.

In the six months of the year alone, the police have killed 104 people who were unarmed or who, at the time of the use of lethal force, did not know if they were armed or not. Among them, only those killed by gunshots or the use of tasers are counted, not those killed by the force exerted by agents, as in the case of George Floyd, which sparked the Black Lives Matters movement.

The figure reached this year is, by far, the highest in a first semester since the Washington Post began collecting data. While from January to June 2015 there were 56 unarmed deaths, the figure has almost doubled in seven years.

In addition, "these deaths have a significant racial bias and a greater impact on certain ethnic groups and minorities," denounces Blanca Hernández Martín, coordinator and spokesperson for the US Task Force of Amnesty International Spain. “The probability of being injured or killed by the police skyrockets if you are a black man, but it also affects other minorities compared to white people”: in total, and since 2015, the rate of unarmed black people who died victims of police officers in any of the US states stands at 4.5 people per million. Whites, meanwhile, make up just 1.5 per million.

The contrast is also very high with the arrests, according to the AI ​​spokeswoman. “The police are capable of arresting a white person alive, even armed and after attacking other people or agents; while the number of unarmed black people who die is very high —either after a routine check or after being stopped by traffic agents, because they mistake them for someone else—”.

If all the victims are taken into account, armed or not, and whatever the type of weapon they were carrying —mostly guns or knives have been reported, but also flashlights, a car jack, a microphone or even a chair— , the figure rises to 7,518 in six and a half years.

Of those, 3,128 were white, 1,650 were black, and 1,107 were Hispanic. On the total population of each group, these figures confirm the racial bias: the victims of the lethal police force represent 16 per million white people, 37 per million black people and 22 per million Hispanics. It should also be noted that a large part of the events that took place during the last quarter of 2021 and so far in 2022 are still under investigation, so the identity and race of the victim have not yet been confirmed. disclosed in most cases. When the investigations conclude, the rate per million blacks in 2022 will be much higher.

In the North American country, the judicial protection of police officers against possible fatalities is much higher than that which exists in European countries. “The principle of authority in the US is not the same as in Europe: disobeying a direct order already authorizes an agent to use the necessary force”, describes Antoni Pascual, a member of the National Association of Criminal Defense Lawyers — entity that, with its Race Matters, tries to "face the challenge that race poses in the United States from the initial contact with the police on the street until the end of the case"—.

"The problem is to justify the proportionality of the act carried out by the police," he laments. In the US, officers have a much higher principle of truthfulness than the European one: just because they are a police officer it is presumed that what they do is legal and correct, so it is always the victim who has to explain why. that she did not represent such a danger that the police would use lethal force against her and in that certain way. “The police must not prove the level of danger —explains Pascual—, but the victim must prove or refute it.”

In addition, he adds, “judges have a tendency to exculpate police action” due to the levels of aggressiveness that American society presents: “The police do not take risks. If they see you take your hand out of your pocket to take out your wallet, they can shoot you.” "The use of lethal force by firearms is part of a much more global problem that is the enormous circulation and presence of firearms on the streets," lamented the Amnesty International spokesperson.

The problem is aggravated by the disparity of norms and protocols, since in the United States there is no federal institution that regulates the use of force, with which each state, each city or even each university can have its body police with their rules. “There is a general absence of action standards —laments Blanca Hernández—, and that favors these actions being incorrect in many places and areas. For example: if an agent is expelled from a police force for malpractice, he can easily be hired by another police force”.

This protocol and regulatory disparity, together with a "militarization of the police", as Amnesty International denounces, causes the police to resort to increasingly harmful strategies. As in the death of Jayland Walker: “there are many cases of people being shot who are moving away from the police, so it does not constitute a threat to the agent that justifies the use of a firearm”: