Unusual protests in Tibet over restrictions against covid

Numerous migrant workers from different parts of China have staged a series of unusual protests this week in the capital of the Tibet region, Lhasa, against anticovid restrictions that force them to stay in the city without being able to work or return home. 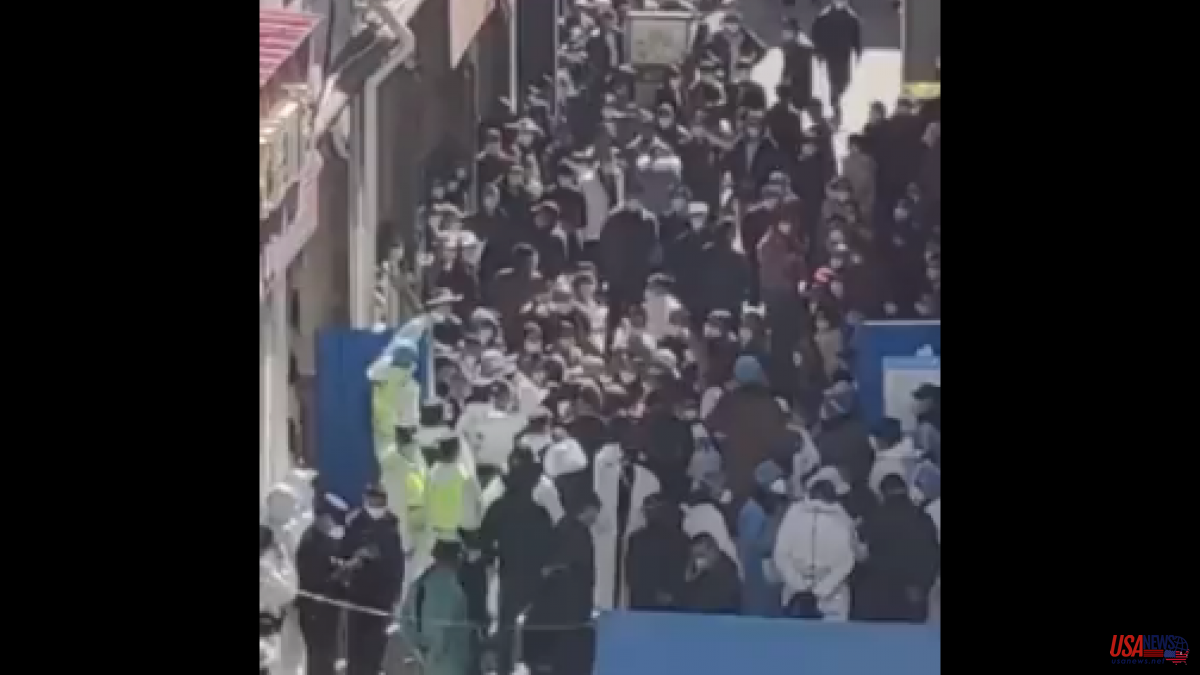 Numerous migrant workers from different parts of China have staged a series of unusual protests this week in the capital of the Tibet region, Lhasa, against anticovid restrictions that force them to stay in the city without being able to work or return home.

Apparently, the signs of discontent, which in some cases have led to clashes with the authorities, have spread to at least four parts of the city. According to Radio Free Asia sources and some videos posted on social networks, most of the participants are migrant workers of the Han ethnic group, the majority in China, who demand to be able to return to their homes in other provinces because the restrictions imposed almost three months prevent them from working and earning a living.

In one of the videos published on Wednesday, hundreds of people are seen gathered on a street blocked by agents while messages calling for calm and asking attendees to leave are heard through a loudspeaker. A second shows numerous citizens marching through the streets shouting “We just want to go home!” Others show scenes of shouting and shoving against the authorities or a group of people who manage to dislodge a large metal door.

Faced with the appearance of new cases, Tibet began imposing anticovid measures in mid-summer. Since then, both Tibetans and migrant workers have been subjected to different types of isolation and restrictions.

In the capital, some criticize that they have been unable to leave the complexes in which they reside or work to earn money for about 80 days while they must continue to meet their expenses. “We haven't had any income for three months, but expenses haven't gone down a penny. How long can we go on like this?” complains a user of Douyin, the Chinese version of Tiktok.

The mobilizations of these days are the largest registered in the region since 2008, when the repression against the pro-independence protests carried out by Buddhist monks and civilians left at least 19 dead and dozens injured. However, the different nature of the current signs of discontent, where the Han are the majority and there are no political claims, have provoked a more moderate reaction from the authorities.

What happened in Tibet once again puts the focus on the zero covid policy sponsored by Beijing during the pandemic. Although his strategy has served to save many lives, the economic damage it causes and the lack of a clear solution is causing boredom and exhaustion on the part of the population, which has sometimes led to protests.

Despite this, the health authorities have reiterated in their latest interventions that this policy is "the most economical and scientific" to deal with the virus, an opinion that is also held by the ruling class. In the recent conclave of the Communist Party, President Xi Jinping once again defended this approach and did not offer any way out to abandon, even gradually, this strategy.

Along these lines, several provincial capitals such as Xining (center), Zhengzhou (center) or Canton (south) have tightened their restrictions in recent days and applied selective confinements in the face of new outbreaks, which in total left more than 1,200 cases throughout the country yesterday. country.

In Zhengzhou, with 10 million inhabitants, these measures are affecting the important factory of the Taiwanese technology company Foxconn, the world's largest iPhone assembler, which had to deny rumors that 20,000 of its plant workers were infected.

The continuation of these restrictions also explains why the future prospects of US companies operating in neighboring Shanghai have fallen to record lows, with only 55% of them stating in their latest report that they feel “optimistic or slightly optimistic” about the future. next five years.

"Although most US businesses remain profitable, the impact of ongoing COVID-related restrictions is negatively affecting business confidence and causing investment to decline," AmCham Shanghai said in its report, which also cites the deterioration of relations between Washington and Beijing and "macroeconomic pressures" as factors that explain this pessimism.