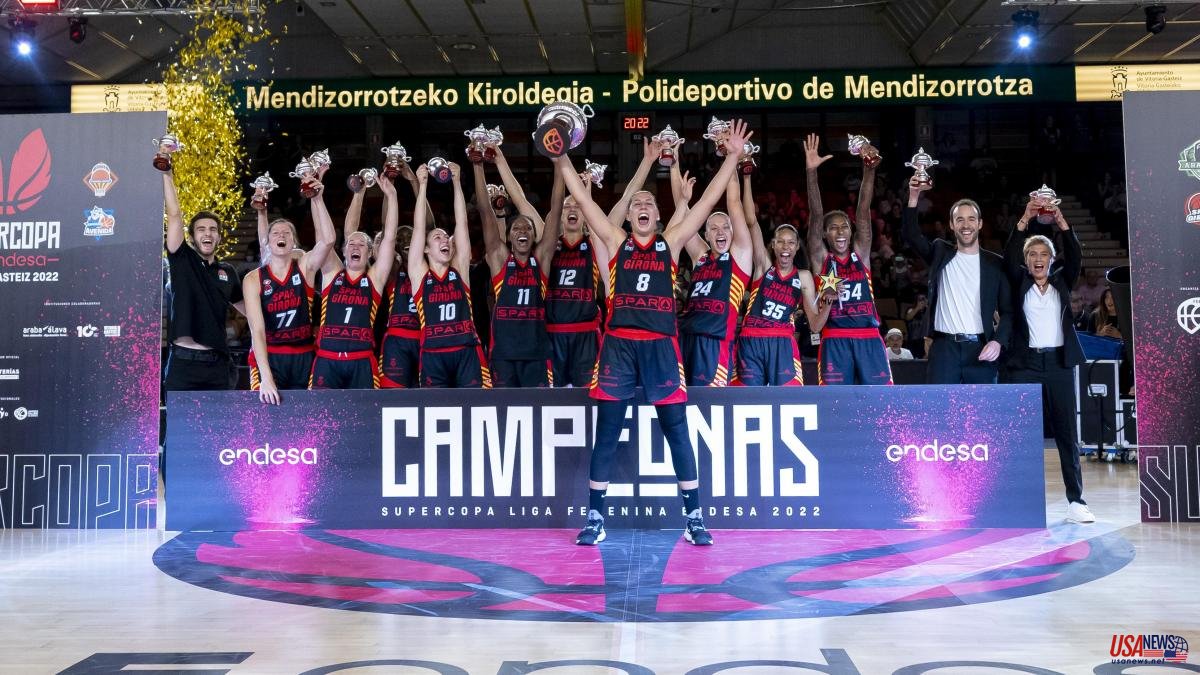 Uni Girona beat Valencia Basket (70-65) in a heart-stopping final and wins its third LF Endesa Super Cup, after those won in 2015 and 2019. Raquel Carrera's 18 points were not enough for her Valencia to revalidate the title lifted last year. At Girona, Shay Murphy (15), Gardner (13) and Laia Flores (12) scored in double figures to contribute to the Catalans' important victory.

The duel between Uni Girona and Valencia Basket did not disappoint the fans who had traveled to Mendizorroza (Vitoria) to vibrate with the final. Two rivals who had faced each other just four days before in the premiere of the LF Endesa, with victory for Girona. But Valencia also had reasons to dream of victory, as the Taronja team defended the title they had won last year after beating Perfumerías Avenida in the final. They beat the team from Salamanca in the semifinals in this edition, securing their seventh final in the Super Cup. Girona did the same with Araski and the fight was served.

Rebekah Jasmine opened the scoring for a Uni Girona team that got off to a good start in the final. Much more successful under the rim and more intense in defense, they opened a gap on the scoreboard until a spectacular triple by María Araújo forced Rubén Burgos to request time-out with an unfavorable run of 12-3 for an increasingly frustrated Valencia Basket. It was good to stop the grapefruit team, which managed to react little by little to close the gap until Laia Lamana's triple that made it 16-10, but Uni Girona would not give in, which opened the gap again to finish the first quarter nine up ( 22-13).

The second quarter began as a continuation of Uni Girona's dominance, but it would end up being for Valencia. With a 70% accuracy rate from the field, the Valencians were unable to get close to danger on the scoreboard and their nervousness was reflected in an excess of turnovers that Bernat Canut's men did not waste to continue scoring. But the taronja team gained confidence, thanks to the success of Raquel Carrera (6) and the omnipresent Cristina Ouviña (5) managed to close the gap to win fourth (15-19) and go to halftime only five points down ( 37-32).

The third quarter began more difficult, with fouls and inaccuracies. A scenario that favored Valencia more, which was stalking Uni Girona on the scoreboard until they managed to get ahead on the scoreboard for the first time in the game with just over six minutes remaining in the fourth, thanks to two free throws after of a Gardner foul. With the 41-44 against, Bernat Canut called a time-out to order his players and try to redirect the situation, but Leticia Romero responded with a triple that marked a 4-15 run for the Valencians. Not under the arms of Uni Girona, who would get one up again, but the fourth was again for Valencia (16-21). Thus, the Girona and Valencians arrived tied at 53 points to face a last quarter of heart attack.

Irati Etxarri opened the last period and a triple by Laia Flores helped Girona open a five-point gap in favor of a great start by Girona. But it wouldn't be easy, Valencia continued to fight and, although they couldn't get back on top, they didn't allow Canut's men to get too far away either. The equality was maximum and anything could happen, but Uni Girona played their cards better and took the title, the third of their record.