UN refuses to provide aid to rebel-held areas in Syria

UNITED NATIONS aEUR "The U. 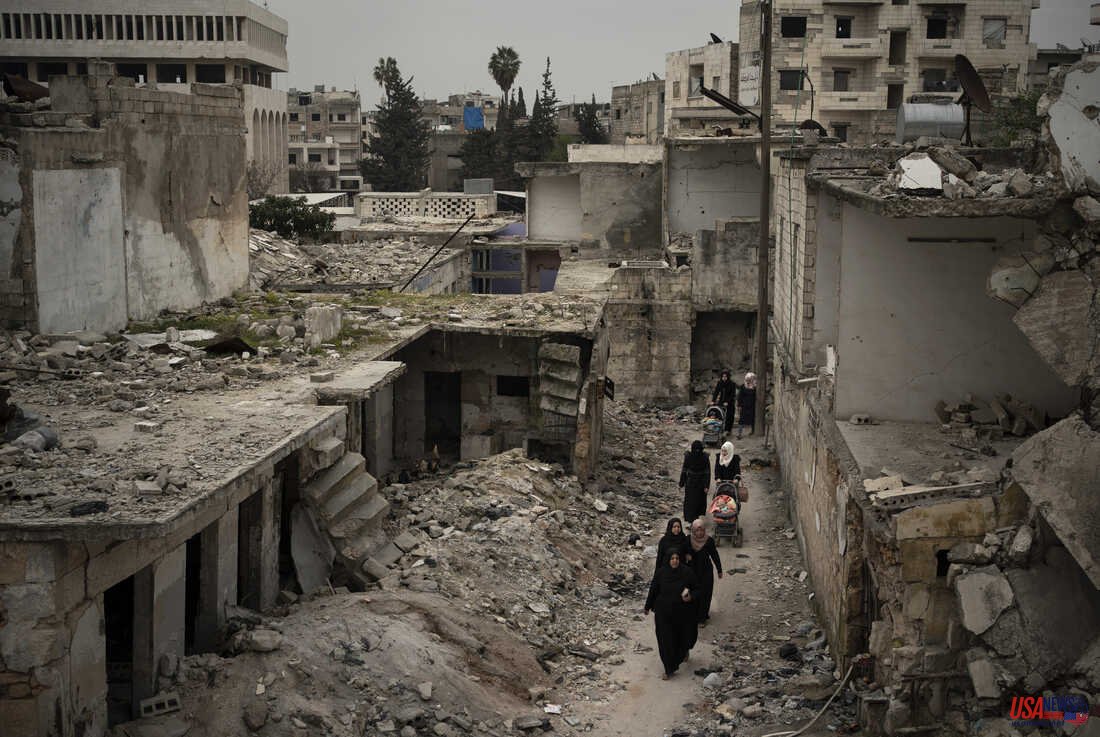 UNITED NATIONS aEUR "The U.N. Security Council failed to pass two separate votes to allow humanitarian aid from Turkey to be extended to 4.1 Million Syrians in rebel-held northwest. The U.S. ambassador warned that people would die as a result of the vote.

After many days of discussions, the U.N.'s largest body was still divided on the issue of how long an extension should be granted.

Nearly all members of the council favored a one-year extension. The U.N. secretary general and more than 30 nongovernmental organizations insist that this is the minimum time period. Russia, however, demanded a six month renewal with a new resolution for six months.

Two days before Sunday's expiration, the U.N.'s largest body failed to reach an agreement on a renewal of its current mandate for deliveries through Bab al-Hawa's border crossing between Turkey and northwest Idlib.

After the votes, many ambassadors, including from China, Norway, France, and the United States, stated that they would continue to try to reach an agreement between the 15 members of the council so that aid does not stop.

Shortly after the speeches and votes, council members entered closed consultations. Discussions were scheduled to continue throughout the weekend.

Dmitry Polyansky, Russia's deputy ambassador, told reporters that there was "99% agreement on a resolution" and Russia would not support a nine month extension as suggested by Brazil or the United Arab Emirates.

Polyansky stated that he does not see any possibility of an agreement unless council members agree to the Russian proposal for six months. He replied, "Obviously."

The resolution for a one year extension, drafted by Norway & Ireland, was the first to be voted on. It was supported 13 countries. China abstained and Russia used its veto against the measure.

The rival Russian resolution was then put to the vote by members of Council for a six month extension. Only 2 countries voted in favor, 3 against, and 10 abstentions.

China was the only country that voted in support of the resolution, while its ally Russia and the three permanent council members aEUR", the United States, Britain, and France aEUR", voted against it. Their vetoes weren't necessary because the resolution didn't get the required minimum nine "yeses" votes to be approved.

The U.S. called it "a dark and dark day in Security Council", After the vote, Ambassador Linda Thomas Greenfield informed members that the effect on the northwest Syrians will be "swift" and "dreadful."

She said that she has long believed this was a matter of life and death, and blamed Russia's veto on the likely deaths.

Thomas-Greenfield visited Bab al-Hawa last June and said that aid workers had told her that a six-month renewal would cause "a disaster" in their supply lines. It would also mean that lifesaving assistance would stop in winter, when the needs are highest. This would be a terrible scenario in a region with millions of people still displaced.

International aid groups called on the Security Council for an agreement before July 10, warning that the Russian Veto would cause serious harm to millions of people who are in dire need of assistance.

David Miliband, President of the International Rescue Committee, stated that there is no alternative to cross-border aid. This means that "this already severe crisis is poised to escalate to a humanitarian disaster."

Save the Children's Syria Response Director Tamer Kirolos warned that failure to reauthorize the Bab Al-Hawa crossing "risks the life of hundreds of thousands" of children living in camps and won't know where their next meal will come from.

Tjada D’Oyen McKenna, Mercy Corps CEO, said that people in northwest Syria are experiencing one of the worst periods of the 11 year conflict. She also pointed out the worsening drought and economic crisis and the impact of war in Ukraine on fuel and food prices. She stated that stopping aid from Turkey would mean the end of food and other necessities for the 4 million people living in the northwest, who depended on these deliveries to feed their families.

Ahmad Rahhal, a Syrian military analyst and former brigadier-general, defected during conflict and joined opposition. He tweeted that Russia's "crimes" were not just through its military support for President Bashar Assad but also "have now reached the level where children, women, and the elderly in north Syria are starved or starved."

The U.S. ambassador Thomas-Greenfield promised to keep her promise to refugees and aid workers that she would "do everything I can to renew this resolution".

Thomas-Greenfield stated that aid groups had told her that they had prepared about three months' worth of supplies for the Security Council, and possibly more, in case it doesn't.

She stated that, if the U.N. resolution was not adopted and U.N. monitoring ceases aid deliveries, the "border is not closing" and that "we will continue working with the humanitarian community in order to find ways to continue providing humanitarian assistance directly to the Syrian population."

Last week, the U.N. stated that more than 300,000. civilians were killed in the conflict in Syria. Northwest Idlib, the last rebel-held area in Syria, is home to Hayat Tahrir al Sham, an al-Qaida-linked militant organization.

A compromise was reached with Russia to extend the one-year mandate for six months on July 9, 2021. An additional six-month period will be subject to a "substantive Report" from U.N. Secretary General Antonio Guterres. Because a second resolution was not required, this mandate was effective a year long.

He said Thursday that 800 trucks of cross-border assistance passed through every month in 2021. This aid reached approximately 2.4 million people each month. He stated that 4,648 trucks had crossed the border in the first six months.

He said that five U.N. deliveries were made across conflict lines last year, and this year the U.N. has delivered approximately 2,529 metric tonnes of aid including food and supplies.