Ukrainian troops continued to advance on Monday in their counteroffensive that has forced Moscow to mobilize reservists and declare the annexation of 15% of Ukraine. 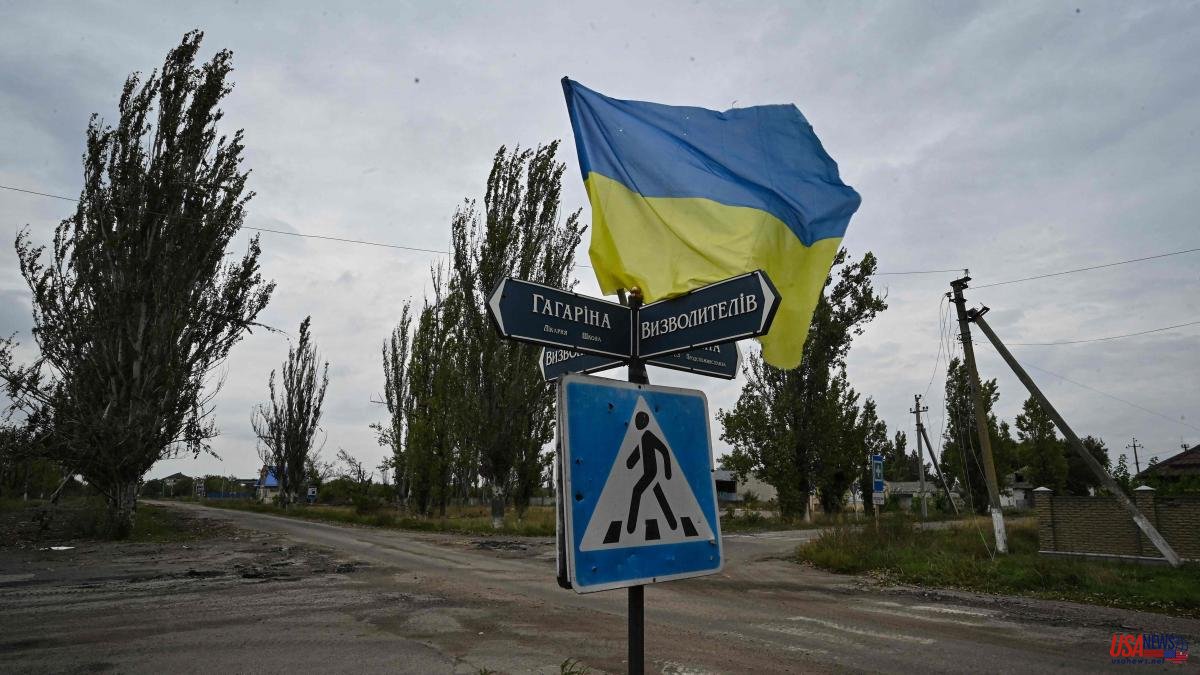 Ukrainian troops continued to advance on Monday in their counteroffensive that has forced Moscow to mobilize reservists and declare the annexation of 15% of Ukraine. Although Kyiv has not given an official confirmation, pro-Russian authorities assure that the Ukrainian army has retaken territory on the banks of the Dnieper River, in the strategic region of Kherson, in the south of the country and one of the four regions annexed by Vladimir Putin on Friday. Meanwhile, on the eastern flank, Ukrainian forces are trying to break through the line of Russian defenses at Kreminna, in the eastern region of Luhansk, after taking control of the strategic city of Liman and Torske last weekend.

Kherson has been one of the toughest battlefields for the Ukrainians, with slower progress compared to the counteroffensive around Kharkiv, the country's second-largest city, in the northeast, which caught the Russian army by surprise early on. last month. Ukrainian media highlighted an image of Ukrainian troops waving a flag in the village of Khreshchenivka, which is in the same area as Kherson, where Kyiv-led troops reportedly broke Russian defense lines.

The head of the Russian-installed Kherson region of Ukraine, Vladimir Saldo, acknowledged some progress by the Ukrainian army on state television on Monday. The situation in the region "is tense, let's put it that way," he said before elaborating. "Where the Kakhovka (reservoir) is, there is a settlement called Dudchany...it is in this area that there is an advance and the Ukrainian troops have taken some settlements," he said. Dudchany, on the west bank of the Dnieper River, is about 40km downstream from where Russian troops had clashed with Ukrainian forces a day earlier.

Another Russian-installed official in Kherson, Kirill Stremousov, also admitted in a video statement that Ukrainian forces "have penetrated a little further." However, he insisted that "everything is under control" and that "Russia's defense system is working" in the region.

While Kyiv has so far not given any official confirmation of its advances in the past few hours in the south, Russian military bloggers have described Ukrainian tanks advancing along the Dnieper bank. And Anton Gerashchenko, an adviser to the Ukrainian Ministry of Internal Affairs, posted a photo of Ukrainian soldiers posing with their flag draped over a golden statue of an angel. The monument is located in the village of Mikhailivka, about 20 km beyond the previous front.

"In recent days, we have seen the first photo of Osokorivka... we have seen our troops near the entrance to Mykhailivka, we have seen our troops in Khreschenivka, next to the monument. This means that Zolota Balka is also under the control of our armed forces, and it means that (they) are moving powerfully along the banks of the Dnieper, approaching Beryslav," Serhiy Khlan, a member of the Kherson regional council, told Reuters, referring to some towns in the area. .

In a video broadcast on Sunday, Ukrainian President Volodymyr Zelensky congratulated troops from his hometown near Kherson for their recent advances in the region. "To the soldiers of the 129th Brigade of my native Kryvy Rih, who distinguished themselves with good results and liberated, in particular, Arkhanhelske and Myroliubivka," he stated. Those two villages are in the same area where the Ukrainian troops have been advancing.

The Ukrainian Armed Forces try to break the Russian defense lines in the area of ​​the town of Kreminna, in the Luhansk region (also annexed by Moscow), after retaking the city of Limán and the city of Torske, both in the neighboring Donetsk, a military spokesman for the pro-Russian separatists said on Monday.

"After we had to leave Liman, our military entrenched itself on the outskirts of Kreminna and the situation is quite hot there," military spokesman for the self-proclaimed Luhansk People's Republic, Andrei Marochko, told the Soloviev Live channel. "The enemy does not stop trying to break through our defenses, but our heroes are facing these attempts right now," he said.

Later, Marochko told Interfax news agency that Ukrainian forces have crossed the administrative border of Luhansk, in the direction of Lisichans, but are currently experiencing "logistical problems due to constant artillery fire from the Russian Aerospace Forces." He indicated that the Ukrainian Army has advanced between 1.5 and 2 kilometers and that they are under Russian fire from three directions. "Anyone who enters the territory of the Luhansk People's Republic is being systematically destroyed from the north, east and south," he said.

The spokesman for the Eastern Group of the Ukrainian Armed Forces, Sergei Cherevaty, announced on Ukrainian television that, after liberating the strategic city of Liman, the Kyiv troops also took control of Torske, west of the first town and a short distance from the Luhansk administrative border.

One of the first cities in Luhansk in a straight line is Kreminna. "Our units have already taken the town of Torske on the way to Kreminna and are attacking with artillery fire the enemy units that are trying to gain a foothold there and build a defense," he noted.

He indicated that for the Russian forces "now it is very important to hold Kreminna. After defeating Kreminna, the Ukrainian Armed Forces will go to Svatove, Rubizhne and later they will be able to vacate the Lugansk region. And (later) there will be Severodonetsk and Lisichansk, from which that they boasted so much in the summer, that they took them away with an incredible effort," the Ukrainian medium Pravda collects his words.