Ukraine, owner of its future?

The Polish president, Andrej Duda, declared yesterday, in a speech before the Ukrainian Parliament meeting in Kiyv, that “only Ukraine has the right to decide its future”. 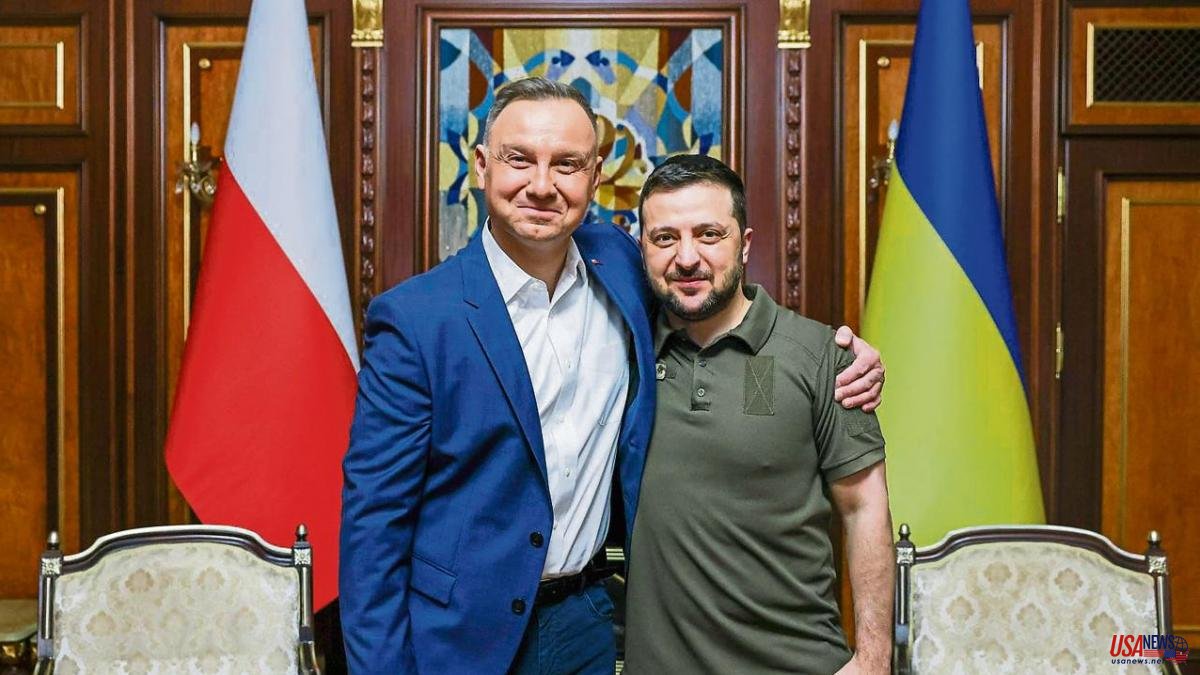 The Polish president, Andrej Duda, declared yesterday, in a speech before the Ukrainian Parliament meeting in Kiyv, that “only Ukraine has the right to decide its future”. It seems like an obvious phrase, but not so obvious. Duda explained that, in the face of "the worrying voices" that are raised in Europe in favor of a ceasefire, it is urgent to back Ukraine's will to fight until final victory.

At his side, the Ukrainian president, Volodímir Zelensky, reiterated that "the war will only end with the complete restitution of territorial integrity and sovereignty."

There is no political will in Kyiv to cede any territory to Russia in exchange for a truce, any more than there is in Moscow.

The Russian army still believes that it can gain more territory in Donbass and consolidate what it occupies in southern Ukraine. Their rivals, however, are convinced that the heavy weaponry coming from their allies will soon allow them to go on the offensive.

Zelensky speaks of a "diplomatic solution" as the only possible one, but he will not sit at the negotiating table until he has a clear advantage on the battlefield.

It is impossible to know when that time will come. Zelensky admitted yesterday that his army is losing a hundred soldiers every day on the Donbass front, where the situation is "very tough." Russia advances on the twin cities of Severodonestk and Lisichank, but cannot do so from Izium. The front hardly moves and everything depends on the defensive capacity of Ukraine and the offensive potential of Russia, which is using its best weapons.

The prospect of a long war frightens France and Germany. Its leaders advocate a ceasefire. President Macron has spoken of “not humiliating Russia”. One of his ministers reaffirmed yesterday that Ukraine's entry into the EU will not be possible for at least twenty years.

However, both Macron and German Chancellor Oleg Scholz lack the necessary leadership to impose their point of view on the United States and the countries of Central and Eastern Europe, which advocate regime change in Moscow. They do not believe that it is possible to restore stability in Europe as long as Putin remains the president of Russia.

In this context, Duda only said yesterday what the governments that most support Ukraine think. "If Ukraine sacrificed itself in exchange for a hypothetical peace of mind," he said, "it would be a serious setback, but not only for Ukraine, but for the entire Western community."

The European Union has presented a common front against Russia. It is the same unity that he demonstrated during the pandemic and refugee crisis. Little by little, however, France and Germany notice how Poland, the Baltic republics and other Warsaw Pact countries want a definitive victory over Russia so that it cannot do to them what it is doing to Ukraine.

They want Russia to pay war reparations and remain subject to economic and political sanctions that prevent it from rebuilding its army. Macron fears that the allies will make the same mistake with Russia that they made with Germany at the end of World War I, by imposing harsh conditions that encouraged Nazism.

Despite Duda's words, it seems clear that Ukraine will not be able to decide its future. She is caught between two great empires, as she always has been. Russia will continue to be Russia even if it loses the war, while the United States and NATO – its armed wing in Europe – will impose a security architecture that contains and isolates Russia, as if the cold war had not ended. Ukraine's triumph may not be that of the whole of Europe.