Ukraine today celebrated the damage to a part of the Crimean bridge caused by the fire of a fuel tank this morning, but without clarifying at any time an alleged responsibility, according to statements collected by the Ukrainian news agency Ukrinform. 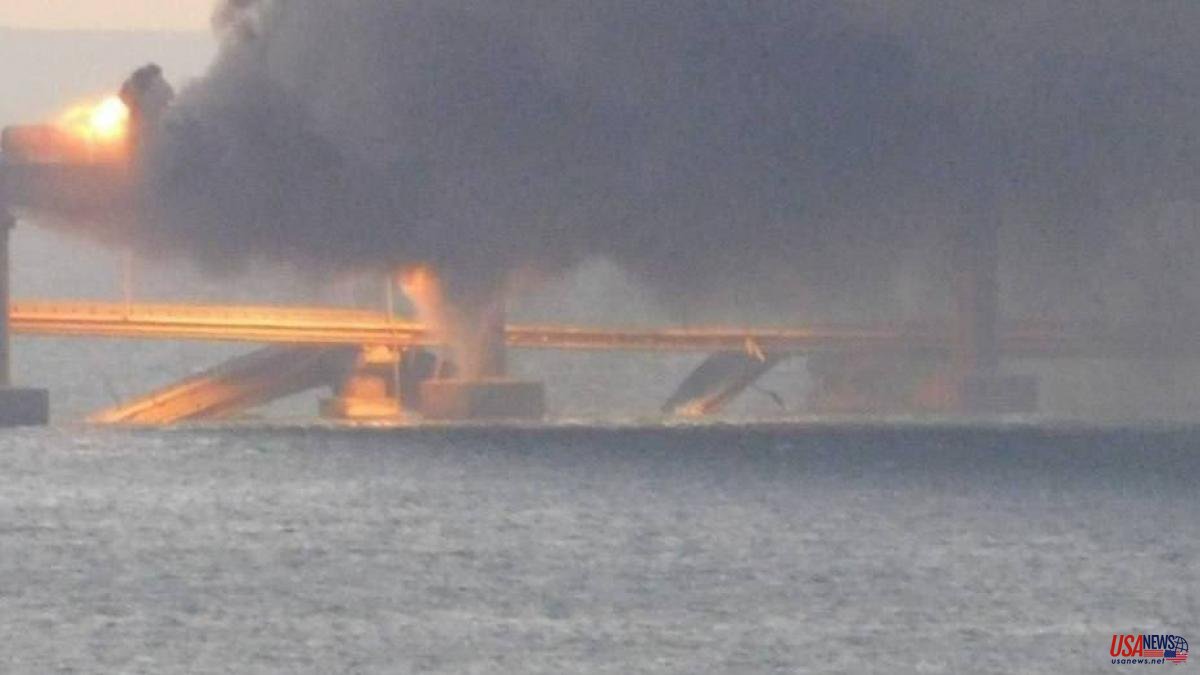 Ukraine today celebrated the damage to a part of the Crimean bridge caused by the fire of a fuel tank this morning, but without clarifying at any time an alleged responsibility, according to statements collected by the Ukrainian news agency Ukrinform.

The Ukrainian air force today reported on its Telegram account of the "destruction" of the bridge: "This morning on the Crimean bridge. Fuel tanks are on fire. Part of the roadway was also destroyed! Everything will be Ukraine !" Says the message from the Ukrainian air force, which is accompanied by images of the destroyed bridge.

Mikhailo Podolyak, adviser to Ukrainian President Volodomir Zelensky, said: "Crimea, the bridge, the beginning. Everything illegal must be destroyed, everything stolen must be returned to Ukraine, everything occupied by Russia must be expelled."

The explosion of a truck on the Crimean bridge caused the fire of seven fuel tanks of a train that was moving in the direction of the annexed Ukrainian peninsula and partially damaged the infrastructure, according to the Russian National Anti-Terrorist Committee (NAC). ).

The NAC stressed that the circumstances of the explosion are being clarified.

According to Tass, "there was a partial collapse of two spans of the automobile part of the bridge," he said. The arch over the navigable part was not damaged.

According to the Ukrinform news agency, citing the Crimean Wind Telegram channel, traffic on the Crimean bridge has completely stopped and huge queues have formed at gas stations on the peninsula.

On September 7, the Ukrainian military high command admitted for the first time to having attacked several military targets on the Crimean peninsula, annexed by Russia in 2014, in one of which it would have destroyed ten Russian warplanes.

For the Kremlin, an attack on the Crimean bridge would be a red line that would not allow it to pass without a response, as they have repeated on several occasions from the Presidency and the Ministry of Defense.

In May 2018, Putin inaugurated the automobile section of the Crimean bridge over the Kerch Strait, the longest in Europe with its 19 kilometers, in order to break the isolation of the peninsula.