Ukraine advances and stands up to Russia

The conflict in Ukraine is going through one of its key moments, with what seems to be the fastest and most successful Ukrainian counteroffensive after half a year of fighting. 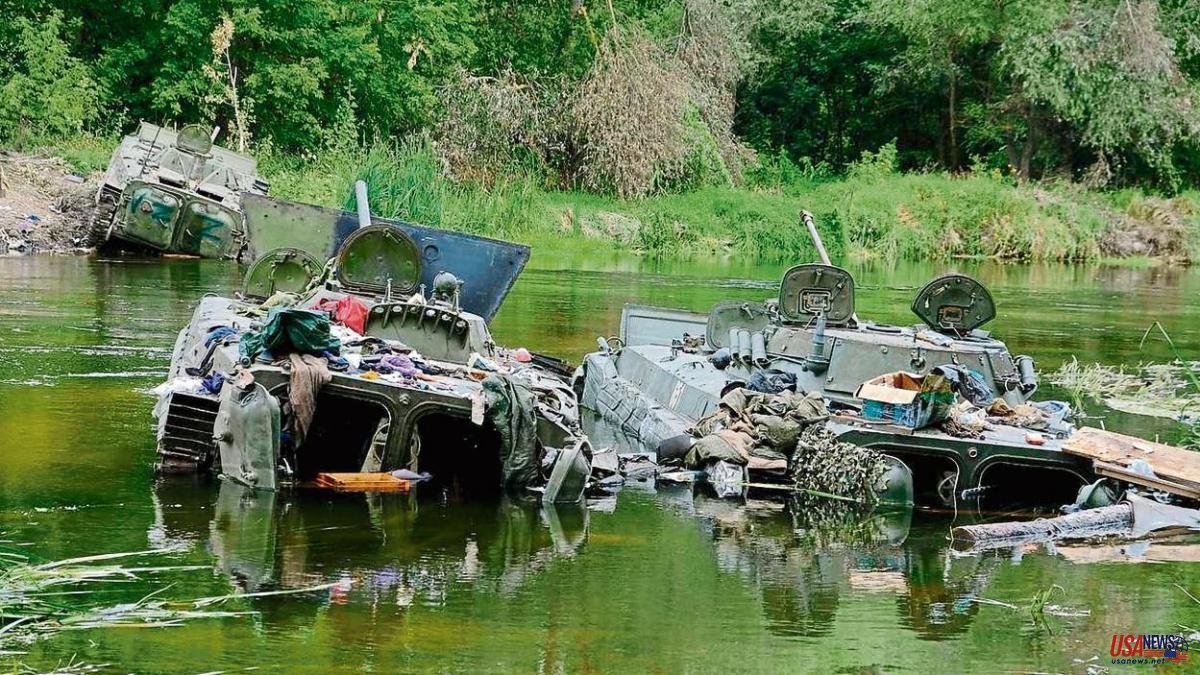 The conflict in Ukraine is going through one of its key moments, with what seems to be the fastest and most successful Ukrainian counteroffensive after half a year of fighting. Despite the fact that Russian forces hit Ukrainian positions in Kharkiv “with precision” on Sunday, according to its Ministry of Defense, this does not prevent the advance of the Kyiv army in that region of the northeast of the country. The Ukrainian president, Volodímir Zelenski, was hopeful, even predicting a victory in the coming winter. Yesterday marked 200 days of conflict.

Some Ukrainian media reported that the Ukrainian flag was flying again in the north of the region after the recovery of Kosacha Lopan, a town 30 kilometers north of the city of Kharkiv and only 4 kilometers from the Russian border.

A day earlier, Kyiv confirmed that it had recaptured Kupiansk, an important railway junction that supplied the Russians, 120 kilometers southeast of Kharkiv, and Balaklia.

Russian troops would have previously abandoned these positions. On Saturday, its Ministry of Defense explained this withdrawal as a strategic withdrawal. His troops "regrouped" from the areas of Balaklia and Izium, south of Kharkiv, to reinforce their contingent in Donetsk.

In the last few days, Ukraine has recovered 2,000 km2, Zelensky said on Saturday. The General Commander of the Ukrainian Armed Forces, Valeri Zaluzhni, in a Telegram message, increased it to 3,000 km2, and assured that his troops are 50 kilometers away from the Russian border.

The next target appears to be the city of Izium, the main logistics base for Russian troops in that area of ​​northern Donbass. Andri Yermak, Zelensky's bureau chief, tweeted an emoji of grapes on Saturday. The word izium in Russian and Ukrainian means raisins. That "would be the most important Ukrainian military achievement since winning the battle of Kyiv in March," the Institute for the Study of War (ISW), a Washington-based think tank, said yesterday.

But the coming months will prove critical, according to the Ukrainian president. “There are 90 days ahead that will determine more than 30 years of Ukrainian independence. Ninety days that, more than the other years, will determine the existence of the EU. Winter will determine our future,” he said at the Yalta European Strategy international forum, held this weekend in Kyiv.

"The winter period can be a turning point in the liberation of the territories," Zelensky said. But he warned that Moscow could "reduce to zero" its gas shipments to Europe so that Western countries seek a compromise with Moscow. That is why he asked them to “maintain support for Ukraine in its war”. "Our army needs a systematic supply of the necessary weapons," he insisted. The Russians "are fleeing in various directions." “If we were a little bit stronger with the guns, we could vacate faster,” he said.

In five days the Ukrainians have recaptured more territory than the Russians have occupied since April, according to the ISW. A situation that raises blisters among the most nationalist Russian sectors, who ask for a victory even if they have to call for general mobilization, a possibility that the Kremlin rules out knowing how unpopular it would be.

The explanation of the strategic retreat does not work for them. Yesterday, the Russian Defense Ministry said it had attacked Ukrainian positions in the Kharkiv region with planes, missiles and artillery, causing more than 200 casualties. Its spokesman, Igor Konashénkov, assured that between September 6 and 10, more than 4,000 Ukrainian soldiers died and another 8,000 were wounded.

Chechnya chief Ramzan Kadyrov criticized army chiefs and suggested that Russian President Vladimir Putin might not be aware of the real state of affairs. “If no changes in strategy have been made today or tomorrow, I will be forced to talk to the leaders of the Ministry of Defense and the leadership of the country to explain to them the real situation on the ground. It is a very interesting situation. Surprising, I would say”, he exposed in an audio message on Telegram.

Igor Guirkin, a former FSB officer who led the pro-Russian forces in Donbass in 2014, compared what happened in Kharkiv to the defeat by the Japanese in the 1905 Battle of Mukden, which fueled that year's revolution. A week ago he predicted a Russian defeat: “The war in Ukraine will continue until the complete defeat of Russia. We have already lost, the rest is a matter of time, ”he wrote on Telegram.

Thus, in Moscow and Kyiv they seem to remember that the possibility of peace talks always exists, although the positions are so far apart that today it is impossible to resume the contacts broken in May.

Russian Foreign Minister Sergei Lavrov assured on television that "we do not reject the negotiations." But he warned that "the longer they delay, the more difficult it will be for them (the Ukrainians) to negotiate with us." Kremlin spokesman Dimitri Peskov said days ago that there will be negotiations if compliance with Russian conditions is discussed.

From Kyiv, Mijaíl Podoliak, Zelensky's main adviser, insisted on the three points that Ukraine is asking for, according to the Liga.net portal: "Liberation of all territories, payment of reparations by Russia and punishment of war criminals" .