Two Spaniards in the semifinal of the 800; Adrian Ben falls down

After the party of the Spanish fifteenth century and the podium of Katir and the fourth place of García Romo and the eleventh of Ignacio Fontes and his harmony and his good vibes, the eighteenth century jump to the Hayward Field synthetic and pose the same conditions. 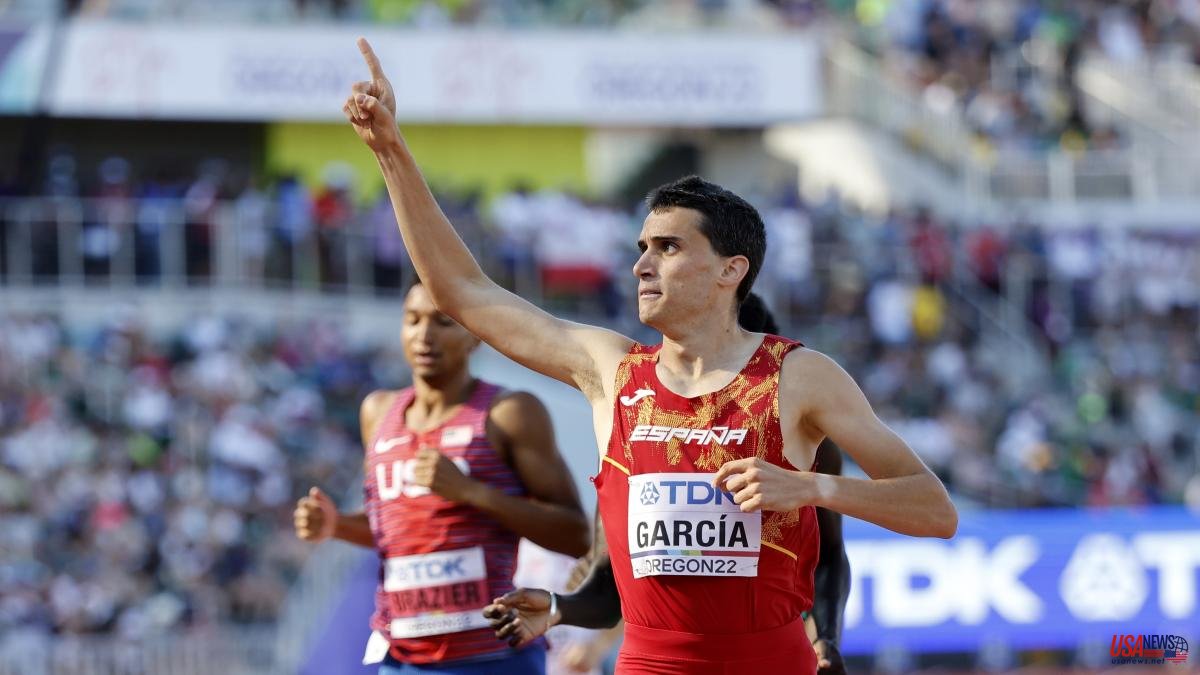 After the party of the Spanish fifteenth century and the podium of Katir and the fourth place of García Romo and the eleventh of Ignacio Fontes and his harmony and his good vibes, the eighteenth century jump to the Hayward Field synthetic and pose the same conditions.

You have to go round as it is.

And if they all pass, the three of them, just as the three fifteenth-century men did, well, better.

Well, that's how the three of them have been these days.

-We eat together, we go to the physio together, we train together. We've been playing ping-pong with each other for two weeks. If we have to do all this together, there had better be a good atmosphere, right? asks Álvaro de Arriba (28), who finished third and passed the round, but had a bad time.

- Haven't you seen it clearly?

-It has been a complex race, with many changes. We started too slow (56.80 on the 400) and I had to get smart to better position myself in the changes of the last 300. The best thing about all this is that I knew how to regulate to enter the last straight with great force.

-And how does it look? she asks him.

-In a way, I'm the best ever. But that is no guarantee. In the 800 you run three finals in four days.

He looks like a scholar of the 800, who would have thought three years ago, when he was running blind.

He neither knew his rivals, nor studied them, nor analyzed them.

He said: 'I went for the one in yellow, I don't know what country he's from'.

And also: 'That one who beat me was very big.'

-I knew those from my town and the regional ones, which is who I had to fight with -justifies himself in the mixed zone-. But now, I already know these international adversaries. I've run with them a few times.

He has run two indoor Europeans. And with this, two World Cups in the open air. And in fact, he is the current indoor world champion (Belgrade, last March).

-Little joke with the series that has touched me. There was the Canadian Bol, and the British Langford, and the French Robert, and the American Brazier, world champion in 2019, who has gone out (he is sixth, in 1m46s72; injuries are taking this talented man ahead of the discipline). And all of them have lost 1m45s and even 1m44s at some point, which I have not done. But hey, it went well.

And so well: Mariano García wins the place by being third, in 1m45s74.

-And I'm six hundredths of my best mark! -he shouts, and is happy that he is going to meet with Gabi Lorente, his coach, a happy coach in these World Cups because he also directs Mo Katir, the bronze medalist in the 1,500.

In fact, he is enraged.

He has been a world finalist in Doha 2019 (6th) and an Olympic finalist in Tokyo 2020 (5th), two milestones that no Spanish 18-year-old had ever achieved.

And he tells us:

-How are you? Because I can't be okay. Man, after two finals, now seeing myself out in the qualifying rounds... well, I can't be happy.

And it's true: ten minutes earlier, Ben was punished by his rivals, Sedjati, Van Diepen and Ayouni, who overtook him on the last straight and ruined his afternoon and his dreams.

-It's hard for me to finish. That he expected the American to shoot (little Brandon Miller, partner of the sensational Athing Mu, is a renowned front-runner who this time hides and also goes wide, fifth in 1m47s29), but he hasn't. And then I realized that the race was going slowly (54.46 seconds to the bell) and I got nervous and went forward in the 600, but by then it was too late.

And so it is: crouching, the others had grabbed the stele.

-They are guys from 1m43s, like Van Diepen. And that's it. And it's a shame, because my last training sessions had been better than Tokyo 2020. But I don't know, in the last 100 I got stuck.

Along with Álvaro de Arriba and Mariano García, they also follow Arop, Kinyamal and the surprising Emmanuel Wanyonyi, a 17-year-old Kenyan teenager, the sensation of the season.

The second chapter, this next morning at 4 am Spanish.