Junts per Catalunya will ask its affiliates on Thursday and Friday of this week about the continuity of their formation in the Catalan Executive headed by Pere Aragonès with a clear and simple question: "Do you want Junts to continue being part of the current Government of Catalonia? Generalitat of Catalunya?". 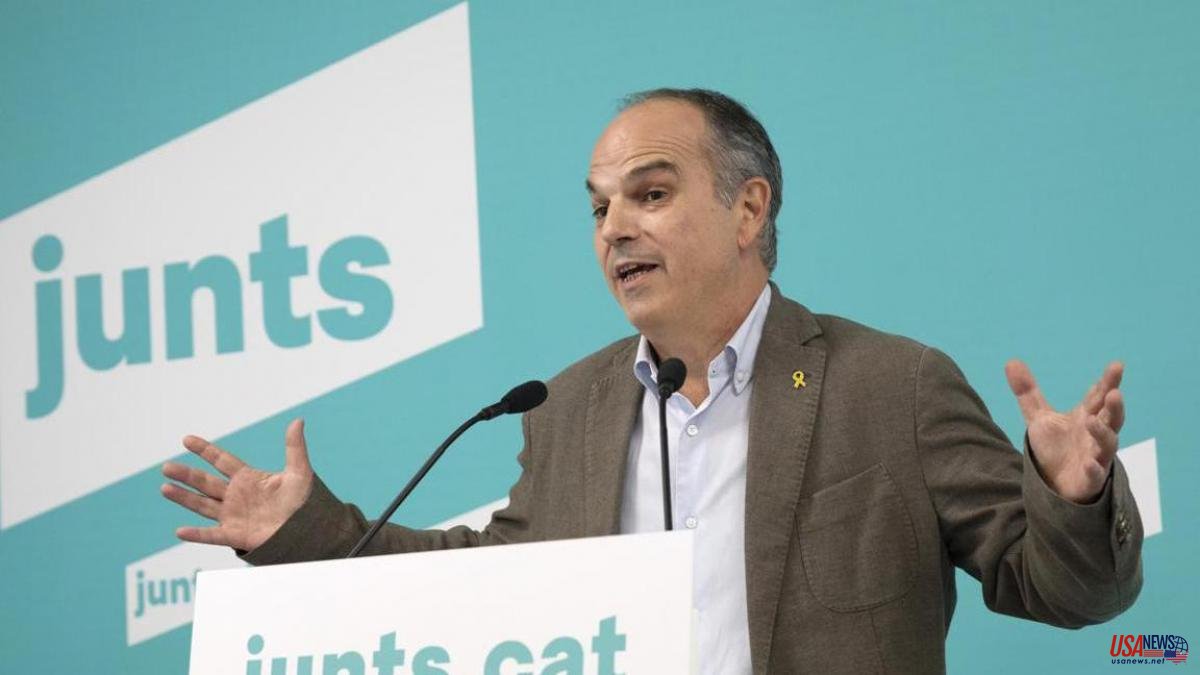 Junts per Catalunya will ask its affiliates on Thursday and Friday of this week about the continuity of their formation in the Catalan Executive headed by Pere Aragonès with a clear and simple question: "Do you want Junts to continue being part of the current Government of Catalonia? Generalitat of Catalunya?".

The approach, in line with what is included in the political paper approved at the congress that was held in July, leaves no room for doubt or ambiguity and is positive, since it asks for continuity and not exit, although in the preamble Esquerra's breaches are denounced.

In the training executive, this issue divides one and the other, but with a left hand and Solomonic decisions, the differences have been bridged until the issue has been transferred to the associates. One of the mantras among the detractors of a referendum on the independence of Catalonia is that they divide, but the general secretary of JxCat, Jordi Turull, sees "no risk" of a break in the internal consultation, despite the fact that other actors of their space do contemplate that scenario depending on how everything goes. “My obsession is that Junts does not break. I don't see any risk”, highlighted yesterday the leader of the formation.

Thus, on Friday afternoon there will be a provisional result of that consultation, in which 6,465 militants can participate, and on Saturday, 24 hours later, a definitive one.

The party executive will remain neutral during the process and will not make a position, although all its members are free to express themselves in their spheres of influence and their environment, although there will not be an organized campaign to use. In fact, Turull assured that he, as general secretary, will not put himself in profile and that he will send his position to the militancy, but he did not want to advance in what direction he will vote. Although it is not conclusive, he hinted that he could defend the same position as the president of the formation, Laura Borràs, who, unlike him, has been in favor of the rupture.

For their part, mayors, councilors and various positions in the formation plan to publish a manifesto in favor of continuity in the Executive, according to Nació Digital. That position is the one that some ministers and the more institutional sector have also defended.

What was not clear yesterday is how Junts will leave the Government if its militants so decide, what deadlines there will be; or what the general secretary of the formation will do, in case of a result contrary to the one he defends. All this remained in the pipeline and will be revealed in the coming days.

Before exposing the query, Turull revealed yesterday that in the proposal sent to Aragonès on Friday to negotiate, in addition to requesting the reinstatement of Jordi Puigneró as Vice President of the Govern, they also offered to withdraw the matter of the question of trust that Junts put on the table during the general policy debate, the germ that ended up triggering the crisis among the partners of the Catalan Executive.

On Sunday morning there was a meeting to bring positions closer that was in vain, and at the last minute, Turull sent a new statement to the president in which the reinstatement of Puigneró as minister no longer appeared. He himself asked to be removed from the equation if that made it easier for things to be relocated. On those points, Junts also lowered its request regarding the dialogue with the Government, and agreed to appoint members of the Government or the Parliament for the Catalan delegation, but in Palau they do not share that in that last proposal there were resignations because, in their opinion, on Friday the postconvergents climbed several rungs in their demands. In addition, they consider that it follows that the Consell de la República is the center of the new General Staff of the independence movement. In this regard, Turull denied that there is any type of "tutelage", and pointed out that it is a "technical coordination" and to ensure the momentum.

Junts' references to the investiture pact are not valid for the Republicans because there has been no reformulation of the Consell, and ERC stood out when there were internal elections in the body chaired by Carles Puigdemont, although in JxCat they say that the disagreement was based on the recognition of the 1-O mandate. To make matters worse, in Esquerra they read Puigdemont's speech on Saturday in the act of the fifth anniversary as an amendment to the entirety of his Government.

Be that as it may, ERC does not look at the matter from the sidelines, since if they vote in favor of the rupture there would be a situation of great uncertainty: a Government alone with the least parliamentary support in history. Even so, Marta Vilalta, deputy general secretary, assured that they are prepared to pilot the Generalitat alone, even if the common people knock on the door.

As a novelty, the councilor Victòria Alsina, who joined this weekend and until now was independent, participated in yesterday's JxCat executive meeting. Last week she already spoke out in favor of staying in Palau and will campaign.