"Freedom, freedom!" "Down with the coup. 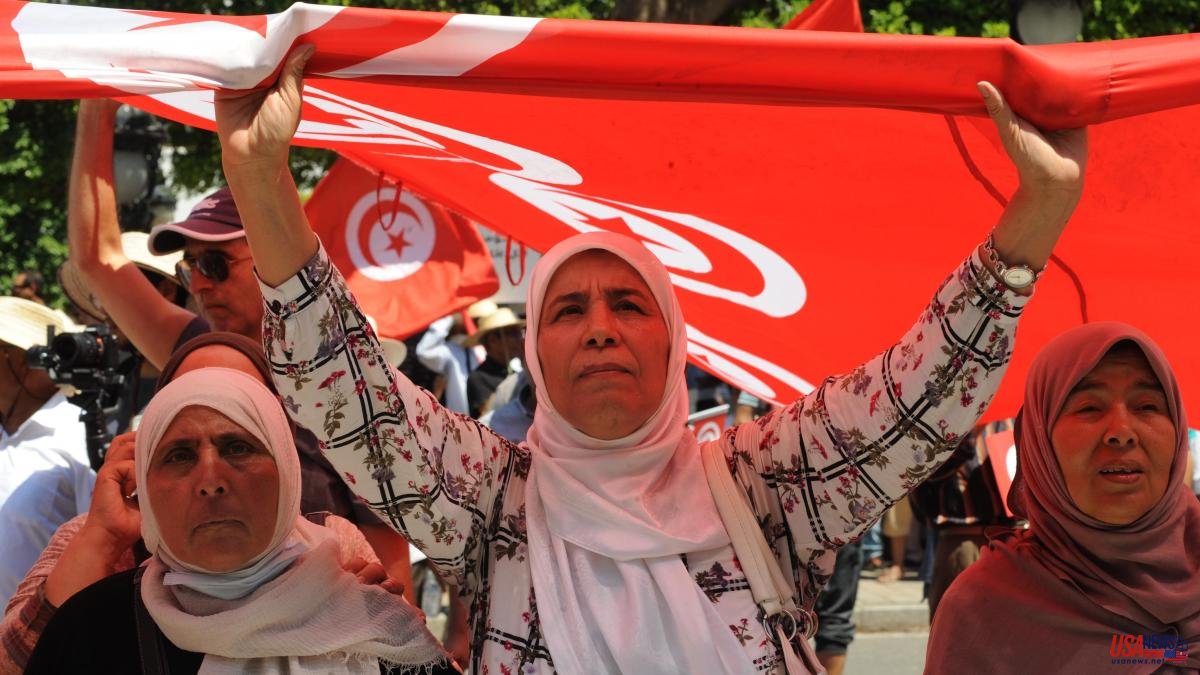 "Freedom, freedom!" "Down with the coup." “We reject the One Man Constitution.” Last Friday, Bourguiba Avenue, in the center of the city of Tunis, was filled with rage and cries sprinkled with nostalgia: the proclamations of a thousand demonstrators actually sounded like the last beats of the revolution. Today more than 9.2 million Tunisians are called to vote, in the first referendum in the history of Tunisia, a new constitution to bury the Magna Carta of 2014, which emerged from the jasmine revolution started three years earlier.

Those massive demonstrations, which led to the Arab spring, caused the fall of the Tunisian dictator Ben Ali after 23 years in power and a social and political opening, with the holding of the first free elections. Everything indicates that the end of that mirage of freedom is coming.

With a divided opposition and a society disenchanted by a serious economic crisis, aggravated by the covid pandemic and the rise in prices due to the war in Ukraine, the approval of the new Constitution is practically certain, despite a foreseeable low involvement. It will be the beginning of a new future for Tunisia: he will adopt an "ultra-presidential" regime for Kais Said, in charge since 2019, who will acquire almost full powers, reduce the role of Parliament and decimate the independence of the judicial system, which will remain under his control. control.

The constitutional referendum is the definitive point of a fast road map —citizens got to know the final draft to vote just 15 days ago— that seeks, as the text itself underlines, to "correct the course of the revolution" of 2011, in addition to consecrating Islam as the state religion. If Tunisian jurists denounced that the new Magna Carta "codifies authoritarianism", civil and opposition groups denounce the loss of freedoms in Tunisia since a year ago, Said declared a state of emergency and dissolved Parliament to "save the nation".

Organizations such as Human Rights Watch or Amnesty International have denounced the authoritarian drift in the country that at the time was considered the best news of an Arab spring that led to misrule and chaos in countries such as Libya or Yemen. For Heba Morayef, regional director of AI in the region, in Tunisia, “there is a growing dismantling of human rights protections. Ruling by decree and without any oversight or control, the president has undermined several key human rights gains that took place in the country after the 2011 revolution.”

The results are expected to be known on Thursday, after which a period of allegations will be opened until the publication of the finals on August 28.

Despite external and internal criticism of the Tunisian president, not everyone takes a dim view of the firmness of the 69-year-old jurist. Political instability over the last decade, which has resulted in a dozen governments, constant controversies in parliament and accusations of corruption, have led to democratic disenchantment in thousands of Tunisians who have seen their quality of life worsen. To the increase in inflation, unemployment and foreign debt has been added the rise in food or fuel prices and the devaluation of the dinar. The covid pandemic and the war in Ukraine have been the last nails in the coffin of the weakened Tunisian democracy.

For Zied Boussen, an analyst at the Arab Reform Initiative think tank, this "drastic change of course plunges the entire country into uncertainty and deepens the divisions in society among the president's supporters, who see the referendum as the beginning of a new era, its critics, who announce the end of the democratic transition that began in 2011, and the rest of the population, who have grown tired of political tensions and have borne the brunt of the economic crisis”.