The Kings have paid tribute to Queen Elizabeth II with their presence, this Sunday, at the funeral chapel installed in the Palace of Westminster. 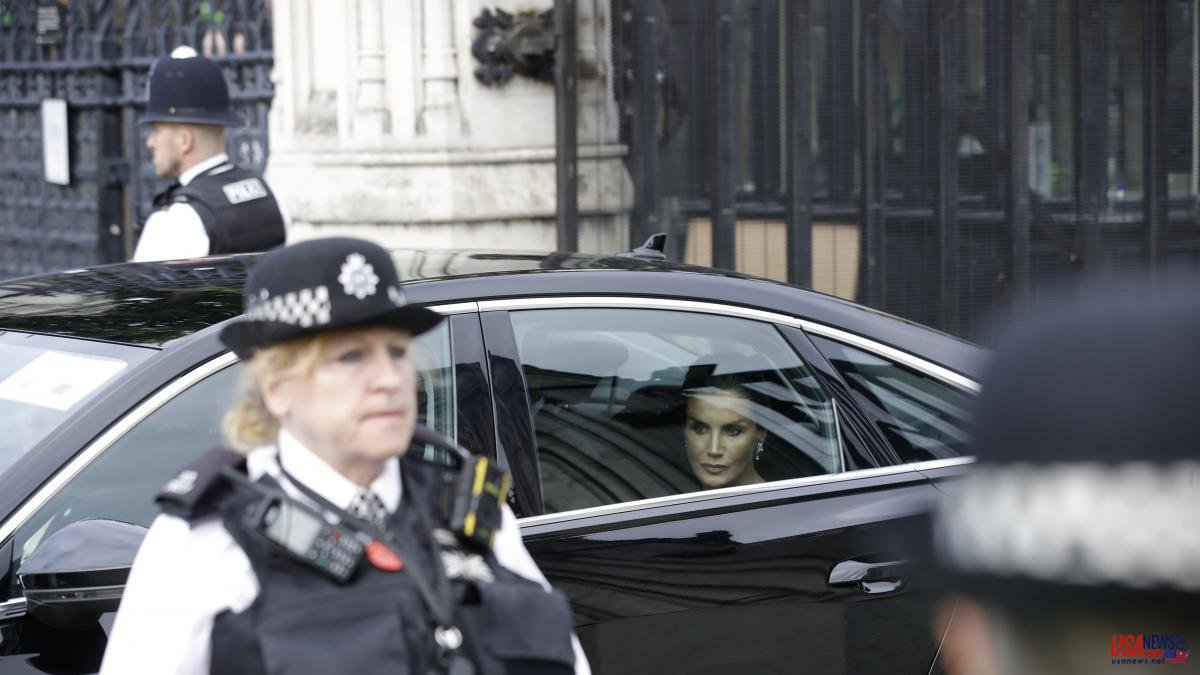 The Kings have paid tribute to Queen Elizabeth II with their presence, this Sunday, at the funeral chapel installed in the Palace of Westminster.

Dressed in mourning and accompanied by the Minister for Foreign Affairs, José Miguel Albares, and the Spanish Ambassador to the United Kingdom, José Pascual Marco, Felipe and Letizia addressed the Spanish embassy, ​​where they arrived at noon, the hall of Westminister, where thousands of people continue to pass to honor the deceased monarch for the last time.

Queen Letizia, in a black dress, wore a brooch of pearls and diamonds that belonged to Queen Victoria Eugenia, wife of Alfonso XIII and first cousin of Elizabeth II's grandfather.

The dignitaries who have already arrived in London to attend the funeral this Monday have passed through the burning chapel; Before the Kings there has been the president of Brazil, Jair Bolsonaro, and after the kings Carlos Gustavo and Silvia of Sweden.

The King and Queen left Madrid this Sunday on an official plane in which Queen Sofía and the Foreign Minister also traveled. Upon arrival at the airport, Felipe and Letizia and the Foreign Minister went to the ambassador's residence, located in Belgravia Square, while Queen Sofía went to meet King Juan Carlos, who this Sunday traveled from Abu Dhabi to the British capital and staying in a hotel.

Kings Felipe and Letizia, as well as Juan Carlos and Sofía, have attended this Sunday the reception that Carlos III has offered at Buckingham Palace to the dignitaries invited to his mother's funeral.

It is the first time that King Juan Carlos participates in a public act, both inside and outside of Spain, together with the King and Queen Sofia since he left Spain on August 3, 2020. The family met last May 23 at the Zarzuela where King Juan Carlos visited after his stay in Sanxenxo (Pontevedra) and before returning to Abu Dhabi.

In accordance with British protocol, King Felipe, in his capacity as Head of State, and King Letizia will be at Westminster Abbey tomorrow in the group of dignitaries present at the funeral, while Juan Carlos and Sofía will do so together with the members of foreign royal families invited to the funeral ceremony, just behind members of the British royal family.