Traffic jam with Busquets and Piqué

The serial for the inscriptions and the problem of the wage bill at Barça has not yet ended. 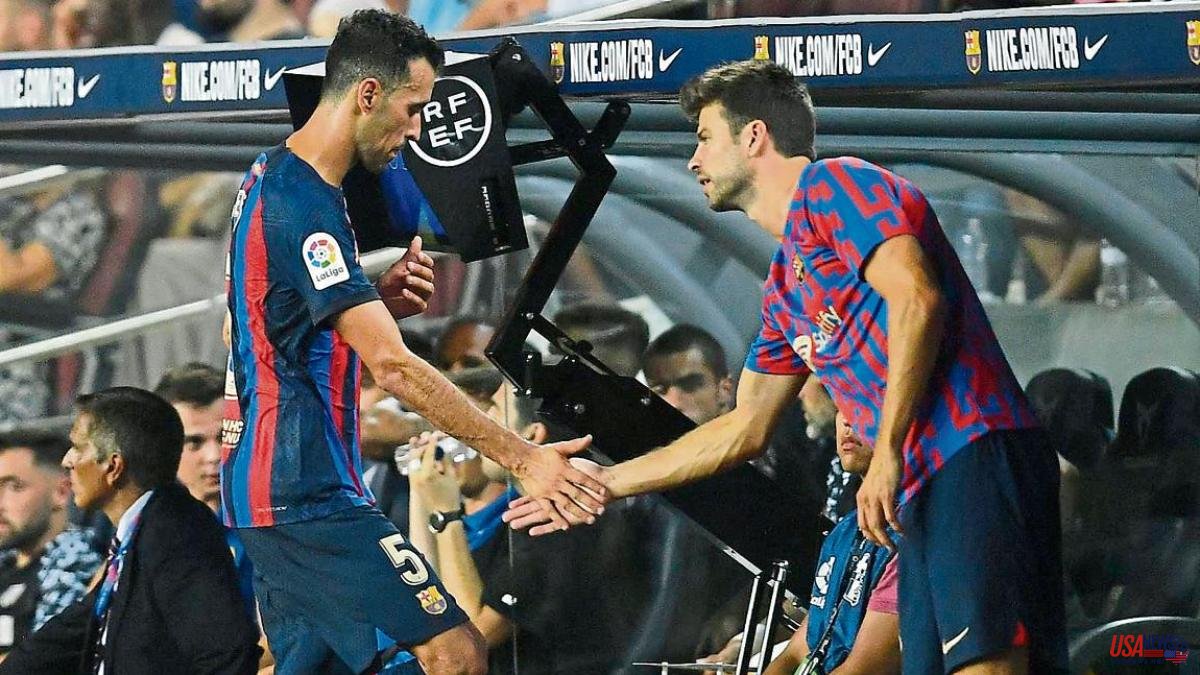 The serial for the inscriptions and the problem of the wage bill at Barça has not yet ended. Negotiations between the club and its first two captains to lower their salaries have been frozen since last Friday. The obstacles that have appeared, at the moment insurmountable, have left the renewal of Gerard Piqué on standby and the deferral that was proposed to Sergio Busquets. This is a stone in the path of the club to lower the wage bill, an essential step to be able to register Jules Koundé to play this weekend.

At the same time, the problems that have arisen also affect the plans to reinforce some positions that Xavi Hernández has asked to promote after the 0-0 against Rayo on the first day. The sports dome did not want to carry out new operations in the market until the Koundé case had been resolved.

At the beginning of last week, Barcelona were pleased with the maximum predisposition they had found in Busquets and Piqué when they were exposed to the possibility of retouching their contracts. The midfielder and the central defender did not hesitate to sit down and talk to the club, as they had done other times in the last two years. But it has been at the time of drawing up the contracts and when the clauses have been put in writing when the obstacles have appeared. Those pitfalls went in two directions. On the one hand, some documents offered fiscal doubts and in terms of collection guarantees. This aspect was mainly circumscribed to the case of Sergio Busquets, since the midfielder did not extend his contract, which expires on June 30, 2023. The 34-year-old captain's plan is still to be released at the end of this course and remains in the air how to capture and collect that deferral if the player already belongs to another club, with almost every possibility of another country and continent, since the idea of ​​Badia del Vallès is to finish his career in the American MLS.

On the other hand, other papers that were signed were not approved by the economic control of LaLiga, which must ensure not only that the pact is legal but also check that the agreements are credible.

That has brought negotiations to an impasse. Are they broken now? Yes. Is it a definitive rupture? We will see. The club is interested in continuing to explore ways to find the ideal formula so that, as they wish, the two captains can help Barcelona obtain more salary margin. However, from the side of Busquets it is very difficult to resume the talks.

Regarding Piqué, the defender was the first of the players renewed by Josep Maria Bartomeu in October 2020 who assured that he would give up that extension, with a high salary improvement. At Barcelona they even saw "signs of crime" in those contracts, which in addition to Piqué were signed by De Jong, Ter Stegen and Lenglet. There was so much harmony with the central defender that it was even thought that before Friday, August 12, when the signings and the renewed ones had to be registered so that they would be available on the first day, a new contract would have been closed, for the same two seasons that They remain but with that drastic drop in salary that the club needs.

However, these obstacles have disrupted the plans of the sports leadership, who saw it as close to reaching both agreements on time. Faced with this freezing situation, Barcelona is beginning to see that the most feasible option to generate salary margin is the sale of footballers. In addition to Braithwaite and Umtiti, with whom Xavi does not have, Dest is a player with a market that does not finish convincing while Chelsea has been interested in Aubameyang, for whom Barça is requesting a transfer. Memphis is still in deals with Juventus. The three would be a more practical way right now.