'Tosca': fascism, sex and decadence at the Liceu

First opera of the year at the Liceu. 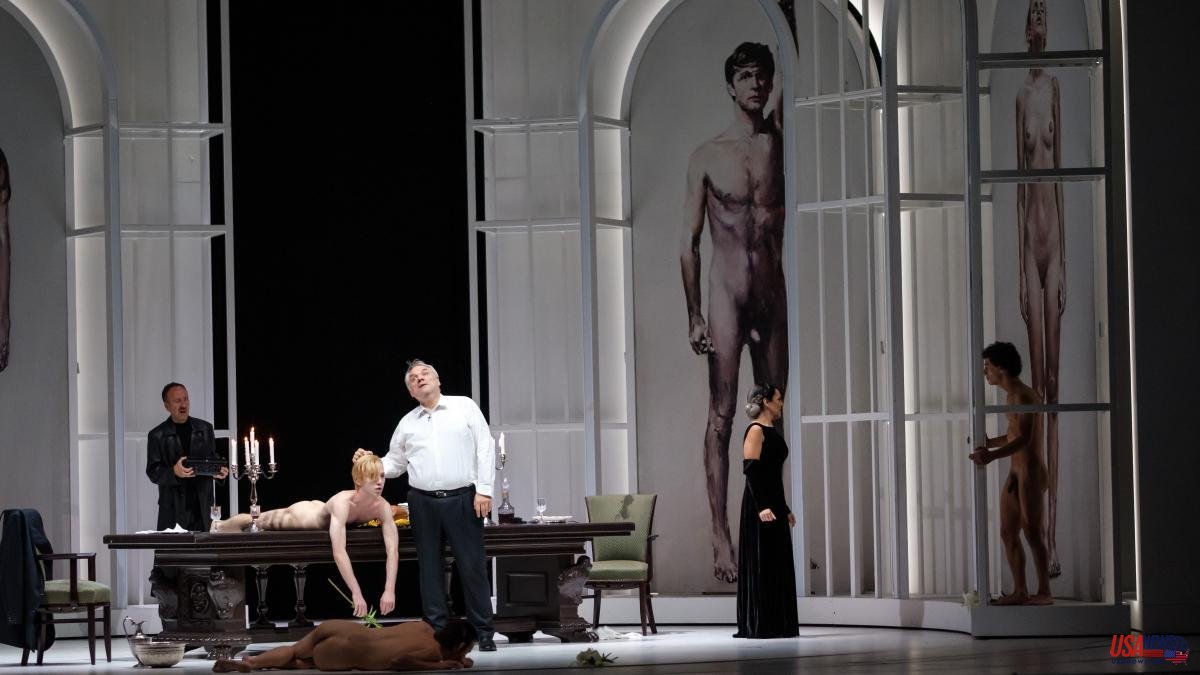 First opera of the year at the Liceu. And first fight too. The heterogeneous audience that came to the Rambla theater last night, some for a well-deserved Christmas gift in the form of tickets to the opera, others for mere year-end tourism, was faced with a new production of Giacomo Puccini's Tosca that it contained everything.

On the one hand, the at times explosive voices of the soprano Maria Agresta and the tenor Michael Fabiano; on the other, a montage that, with a monochrome aesthetic and a decadent aftertaste, seeks to evoke the Rome that Pasolini recreates in his mythical film Salò, about the republic commanded by Benito Mussolini, a puppet of Nazi Germany, who made the State a real bully dog especially dissident bug.

The evening began unbridled in the orchestral and restrained in the stage, even with allusions to a joyous abuse of young sacristans in the church of Sant'Andrea. The direction of the actors is minimal, which pleases the singers but not so much the public: the acting is not always credible and lacks dynamics. Of course, Cavaradossi appears as an alter ego of Passolini. And the filmmaker's character also wanders around the circular and revolving stage, framing with his fingers a possible shot of Floria Tosca.

The reaction of the public did not wait. The boos made an appearance at the beginning of the second act, when Passolini came to life and came out saying, with the curtain down, that "an artist is subversive just by opening his mouth if it makes him uncomfortable." The stage director, Rafael R. Villalobos from Seville, decided to introduce a pop song, Love in Portofino (1958), for a gay scene between the figure of the iconic filmmaker and his lover Pino Pelosi. What unleashed the anger of some attendees –“Where is Puccini!”, “Get out!”– from the public who were not necessarily the longest-lived, because in the stalls a grandmother rebuked them: “You are some carcas”.

And that the nude scenes had not yet arrived in what was a sadomasochistic bacchanal in honor of the character of Scarpia, the police chief, with young actors/sacristans as part of the pornography. In fact, the theater itself had included a warning on its website about this production of Tosca musically directed by the Hungarian maestro Henrik Nánási: “It contains references to the film Salò o le 120 giornate di Sodoma by Pier Paolo Pasolini that may be offensive to some viewers ”. A step back in artistic freedom and in the image projected by the public of the opera? Or a health recovery by the Liceu in those times of social networks and complaints on the surface?

In the final seven minutes of applause there were ovations for the singers and some whistles for the stage team. Villalobos not only proposed a change of historical location, since the plot of the original script takes place in Rome in the 1800s, with the singer Floria Tosca and the painter Mario Cavaradossi longing for Napoleon to free them from Bourbon repression. No, he was proposing that the Rome where Pasolini perished at the hands of the right and the curia would overlap with that of history. And also that of Salò, a depraved society prey to cruelty and horror.

The effort in this duplicity was at times in vain, because, is the assembly a success when it needs an instruction book? The cast – how scary Scarpia in the voice of the baritone Željko Lučić, although he later chains himself not to possess Tosca but to be dominated by her – showed off their experience and vocal ability, bringing passion and energy, but, as one fan said in the audience... "when you hear Callas, that's it, she got into the role!". The Italian soprano Maria Agresta provided a less angry Floria than Maria Callas certified. And her Vissi d'arte did not go further. For his part, the tenor Michael Fabiano had a notable debut at the Liceu. To his round E lucevan l'stele, the aria in which an imprisoned Cavaradossi says goodbye to life, we must add his conviction as an American who believes in the fight for his character's freedom: "Against the fascism of yesterday and tomorrow today".