The former Parliament member Roger Torrent and two pro-independence members of the Board of the previous legislature have defended before the judge of the Superior Court of Justice of Catalonia (TSJC) that from their function in the governing body of the Chamber they could not prohibit the processing of initiatives since they did not have the power to assess their content, something that falls, as they have indicated, to the parliamentary groups and the Government. 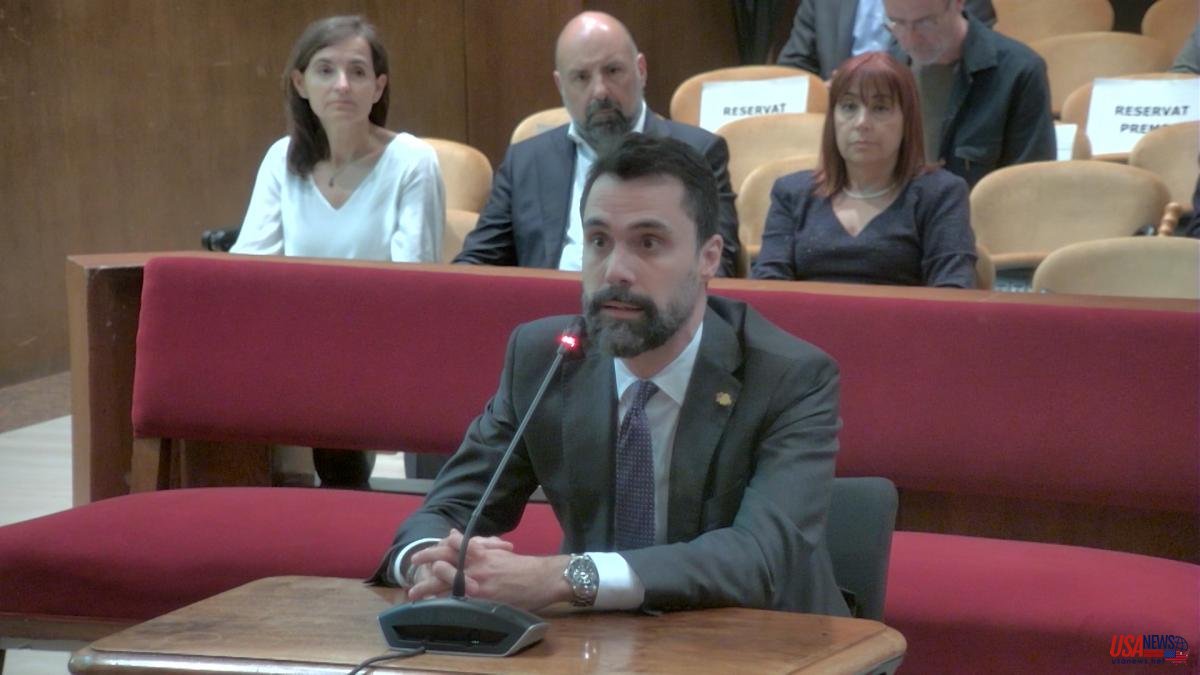 The former Parliament member Roger Torrent and two pro-independence members of the Board of the previous legislature have defended before the judge of the Superior Court of Justice of Catalonia (TSJC) that from their function in the governing body of the Chamber they could not prohibit the processing of initiatives since they did not have the power to assess their content, something that falls, as they have indicated, to the parliamentary groups and the Government.

Torrent himself, current Minister of Business, (ERC), the former first secretary Eusebi Campdepadrós (Junts) and the former fourth secretary Adriana Delgado (ERC) have answered only the questions of their defense in the trial that is seen today for sentence and in which they face, together with the then First Vice President Josep Costa (Junts) - who stood up in court yesterday and has not come to testify today - an accusation of disobedience for processing two resolutions, one in favor of the right to self-determination and another, of disapproval of the Monarchy, which the Constitutional Court had vetoed.

The three defendants who have testified this Friday have agreed to point out that their functions in the Table did not allow them to assess the content of the initiatives they were processing and that the control that the Table can exercise over them is merely formal.

In this sense, Torrent has declared that the TC "cannot prohibit any debate", that the Table cannot exercise "censorship" of political options and has considered that "delimiting or prohibiting the processing of a parliamentary initiative goes against the very essence of palamentarism".

The three defendants have also assured before the court that by admitting the measures, they acted to protect or preserve fundamental rights such as the ideological freedom of groups and deputies, the political representation of citizens, the inviolability of Catalan Chamber and its members and freedom of expression.

In any case, Torrent has recognized that the legal services of the Chamber warned at the time of the warnings of the TC but has added that at the same time "they questioned them" and "in no case did they recommend the processing" of them. In this regard, both Delgado and Campdepadrós have recalled that in the case of one of the two resolutions, the lawyers told them that rejecting them "could be excessive".

On the other hand, the current Minister of Business has emphasized that the TC only controlled the regulations already approved by Parliament until in 2014 "it changed its doctrine" at the beginning of the process and began to exercise "censorship prior" and has recalled, as the other defendants have done, that the Parliament has previously approved similar resolutions.

Campdepadrós, for his part, recalled that, together with Costa, they filed a lawsuit in the European Court of Human Rights (ECHR) during the previous legislature in which they challenged the competence of the TC to send requests to a Chamber that affected the inviolability Of the same. For this reason, he has warned the court that it could be the case that they were sentenced based on a factual assumption (not complying with a requirement of the TC) that the ECHR would later annul.

For its part, the Prosecutor's Office has stressed that the defendants do not deny the facts of which they are accused, but instead hide behind "exculpatory arguments." "The defendants pretend that they are above the constitutional regulations and the resolutions of the courts," the prosecutor has sentenced.

Regarding the absence of former deputy Costa, the court has issued an order in which it "reiterates" that "he can appear at today's session and make use of his right of defense." Yesterday Costa left the view by not recognizing the "authority" of the room to judge him.

The president of the Court, Carlos Mir, has intervened in the hearing to recall that this ruling had been sent to Costa and has asked that "it be recorded" that the former deputy has declined to attend the trial, according to his attorney.

Costa, who is a lawyer by profession and exercises his own defense, participated in the preliminary questions of the first day of the trial, but yesterday he decided to abandon the hearing, after the TSJC rejected his request that the process be annulled.

After a brief deliberation, the TSJC decided to go ahead with the trial without Costa, although aware of the unusual scenario that the former deputy had caused: the law allows him to be tried in absentia since he only faces disqualification penalties, but requires that all accused be represented by an attorney.