In L'escala de l'enteniment, the stone sculpture that Josep Maria Subirachs erected in homage to the distinguished Ramon Llull in the heart of Montserrat mountain, it is hard to say which of the eight steps Toni Bou (Piera, 1986) would be on in his way to perfection: stone, flame, plant, beast, man, sky, angel, God. 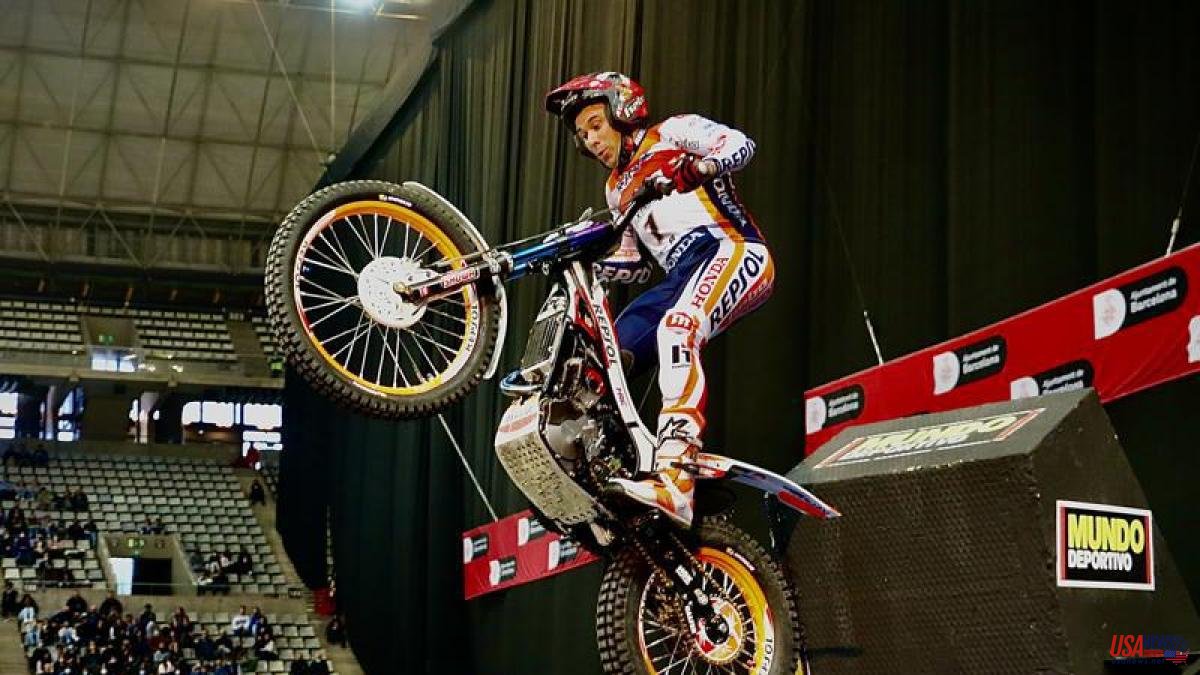 In L'escala de l'enteniment, the stone sculpture that Josep Maria Subirachs erected in homage to the distinguished Ramon Llull in the heart of Montserrat mountain, it is hard to say which of the eight steps Toni Bou (Piera, 1986) would be on in his way to perfection: stone, flame, plant, beast, man, sky, angel, God.

Years ago the most successful trial rider of all time –32 world titles won a few days ago in Italy– ceased to be a simple man in the discipline of balancing on two wheels to ride like angels and touch the sky every season. Without being offended believers and good people, Toni Bou has earned to be considered a god. Sports. From the trial.

No one has managed to amass so much glory in trial, or in other disciplines. And nobody has done it for so long in a row, 16 years in a row of hegemony, since 2007, when he signed for Montesa, a motorcycle –within the official Honda factory– with which he forms an indestructible pairing.

Toni Bou took to the trial as he would have given to being a firefighter or a mechanic, his two preferences as a child. But, “since there was a motorcycle at home and my father and uncle practiced this sport, it is easy for a child to ask for a motorcycle. This makes it easier to start." The one he started with was “an Aprilia, when he was four years old”, explains his father, also Toni. "Although he had been asking for it for quite some time." His idols were Jordi Tarrés, Marc Colomer, Amós Bilbao... whom he went to see at the Palau Sant Jordi in the Indoor Trial in Barcelona, ​​in the mid-nineties. Two decades later, Piera's would end up being, with 15 wins, the lord and master of this pioneer trial of indoor events.

That little Bou began to gain experience in balances with the trial-sin bicycle; his ability led him to become world champion at the age of 12, and endowed him with a unique technique, differential, to guide the bike where he wants, according to Jordi Tarrés.

When he was older, the boy Bou looked like the professional pilots he had as references, "running like them indoor tests", enrolled "in an official team, that paid you everything and I didn't have to spend money to compete... To be able to be professional. It was my dream and my goal. I remember my first contract with great enthusiasm, I was very young: at 15 I signed a four-year contract with Beta, it was a super important moment for me”.

With the Italian motorcycle he became known, his first World Cup victory came at the age of 19, and with the Montesa, hand in hand with Honda and Repsol, he made the leap in quality. As of 2007, world titles began to rain down, two each year, one outdoors and the other indoors...until accumulating 32 crowns in the last 16 seasons. An outrage. Is Bou aware of this?

Especially when you look back. When you're competing you just want more and more, and nothing seems like much. You just want to win that race, that title. But when you look back and see all that you are achieving, because of the continuity of the years, so many in a row, it even seems easy to me. But every year is a story, there is a preparation, some nerves, a possibility of losing... When you look back you realize everything -explains Bou from the Mirador de los Apóstoles, at the foot of the monument to Ramon Llull, with views of the imposing Montserrat conglomerate blocks.

A familiar setting for Bou, who visited when he was 12 or 13 years old with his sister Gemma –she was a two-time world champion in trial-sin– and his friend and assistant Quim Isart. They biked up Collbató and went down the mountain to Piera.

Montserrat, iconic and majestic, the unattainable immensity, watches an equally stony Toni Bou, who has not broken down in his 20 years in the World Cup elite, despite the erosion of time and the elements, such as injuries.

-What I feel most proud of, in all these years, is my consistency, being able to fight every year; It's something that goes with my character. I want to leave this image of a pilot who never gives up, who fights to the end, who never wants to lose anything... It's who I really am. Without this attitude it would be impossible to win both titles for 16 consecutive years, no matter how talented and how eager you are. Leaving this mark is what I feel most proud of – confesses the tireless pilot, who does not set an imminent expiration date.

-I have had examples of legends such as Tarrés or Colomer who retired at 30 or 29, or Lampkin at 32... The new fashion, the new diet, the new physical preparation or the new lifestyle mean that all athletes are stretching our races. But we must not forget that it is a dangerous sport, there is no speed but it does have risks, I have had years with very good results (from 2017 to 2020) but with injuries that have caused me discomfort - he explains, remembering the three vertebrae lumbar (L2, L3 and L4) that broke in February 2018 in an exhibition trial in France, and that could have cost him his race.

This 2022, "an entire year without injuries and without discomfort", has made him refocus and begin to trace the way out. This is how he reflected aloud in his conversation with this newspaper:

–Having won the World Cup now with 35 makes me think that if we do things right and there is no fall, I could extend like Raga (40) or Fujinami (he retired last year with 41). It was something that was not very clear to me...

Thus, taking the confession on the fly, and following the logic of events, the numbers come out easy: about 36 years old, he has 32 titles, at two per year, at 40 he could reach 40 titles. There you have the challenge, right?

–It looks very good: 40 with 40 would be incredible. It would be crazy. That would mean since she was 20 years old winning every possible title every year... she's a lively one. If numbers are talked about this way [lightly, she means] it's my fault, because of how things have turned out –Bou laughs, savoring the challenge that is beginning to take shape.

I can't say no either. I've been winning for 16 years in a row and if I'm still linked to this team I can't stop trying. But you have to be realistic: we are talking about winning 8 more world championships, something that would be incredible in anyone's career, so you have to keep your feet on the ground. It's not my priority goal, but I'll go for it. Sure, I'll try it if I'm in shape. Of course it crosses my mind, but logic tells me that this will end one day, the streak will end.

Indeed, everything has an end. Bou's will be, as he sees, “an injury or a rival. I hope that the day I lose it's because of a rival, because it's more beautiful than losing because you physically can't. When you fight against yourself, when something hurts, you don't enjoy it. It's the worst thing in sport." Among the opponents he points to Jaime Busto (Vertigo), the 24-year-old Biscayan, world runner-up. “He is one of the riders that he arrives pushing harder, he just lacks more regularity and more maturity; he has projection and has not yet hit the roof of it. We'll have to see if I can't with him or if physically I haven't been 100% for a year and I can't fight for the title”.

The day he leaves him, Bou already knows where he will have to recover the hours sacrificed: in the family, friends and partner, "who has to put up with you being away and with his attention on something else." Perhaps then, and only then, will Bou consider offspring. “Now I am not entirely clear about being a father. The life I have helps me think about it a little more.”