The Vendrell Festival seeks to recover the spirit of the soirées that spontaneously took place at Pau Casals' house when he was visited by other musicians and they ended up playing chamber music together. 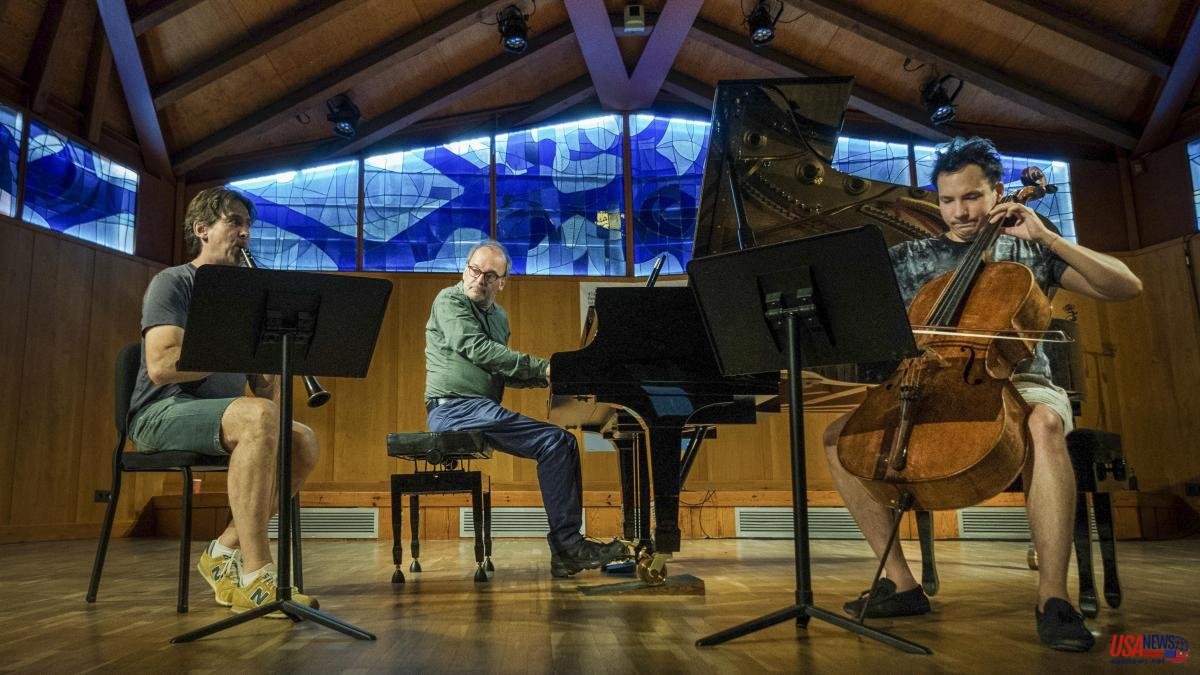 The Vendrell Festival seeks to recover the spirit of the soirées that spontaneously took place at Pau Casals' house when he was visited by other musicians and they ended up playing chamber music together. To do this, he has brought together in the Sant Salvador auditorium, the same neighborhood in which the Catalan master was born, three classical aces who, with the lightness that characterizes the greats, have known how to connect artistically with just a couple of days of essays.

Under the title of Una vetllada a la Vil·la Casals, the violinist Brandon Garbor, the viola player Jonathan Brown and the cellist Alejandro Gómez met on Wednesday the 20th. And on the second of these evenings (21st at 8pm) the festival brings together three great performers from different generations: the Canadian pianist Louis Lortie, the Alsatian clarinettist Paul Meyer and the young Parisian cellist and media player Edgar Moreau. All of them Francophones, not in vain who summons them is the Frenchman Bernard Meillat, the artistic director of the festival.

And speaking of Pau Casals, Lortie says that one of the first LPs he had, when he was ten or eleven years old, was precisely one by Bach, by the distinguished cellist. “But he wasn't a Bach on cello but conducting the Brandenburg Concertos, I think with musicians from Marlborough and perhaps recorded in Puerto Rico. Listening to it for the first time I thought that nobody had achieved that warmth of sound, it was something impressive".

"Unfortunately today there are not so many people capable of playing with that spontaneity and freedom. We are losing that freestyle, everyone plays more or less the same, with the rubato and so on. But Casals, even when he made noises, he was very physical, organic", argues the pianist during a rehearsal break. "Today organic food drives us crazy, maybe we should go a little crazy with organic music", he laughs.

This Thursday's program at the Vendrell starts with Beethoven's Trio for piano, clarinet and cello and closes with Fauré's, a work rarely performed "because it does not seek success nor does it try to please the general public, it is more for connaisseurs and the people who likes this type of intimate music”, points out Lortie, who, in addition to being a performer, is the director of the Lake Como festival of classical music, which he founded six years ago with the baton Paolo Bressan.

He assures that he has studied it for the first time for this occasion, which has delighted him, since he remembers that precisely in his native Montreal he had the good fortune to be a student of a Fauré student. A Belgian pianist who, even though she was very old, remained lucid and sharp. She had emigrated to Canada in the 1930s after having played for the French composer. In 1910, at the age of 15, he excelled at the Paris Conservatory directed by Fauré himself, from whom he received good advice. “When I tell my students that my teacher was born in the 19th century, they think I'm a dinosaur,” smiles Lortie.

The program combines pieces that require more difficult concentration and others that are better known and easier to listen to. As it should, adds Lortie. With Meyer, with whom she has played recently, she performs Brahms' Sonata in F minor. And the duo with Moreau, with whom Lortie shares the stage for the first time – "although I met him at the Jerusalem festival, along with the rest of his musician brothers and his mother, who is a translator from Hebrew" – will offer Debussy.

“I have not found a recording of this Sonata by Casals. I think he never recorded it, and it's a shame because the whole piece is so Spanish...just like the rest of Debussy's later work. The man was dying of a terrible disease and it is as if he looked to the South in search of sun and freedom. It would have been interesting to see what Casals did with it,” he says.

Lortie vindicates chamber music and considers that throughout the year they do not do it enough, busy with "too many solo concerts and recitals". "But summer is the time to meet other musicians you know well or those you don't know. You always discover and learn new repertoire. And it's more relaxed, because you do a piano recital from memory and instead here you use the iPads, a great solution."

Since he founded the LacMus Festival, he has lived between Lugano, Switzerland, and this beautiful Italian spot that is Lake Como. Each concert is in a different location: villas, churches, squares... and with very good exterior acoustics, such as if it is a natural amphitheater. "We really have gotten used to it: the cultural heritage of Italy is infinite. You feel a great responsibility when it comes to carrying out all those concerts."

Regarding his native Canada, whose diversity of origins due to emigration has given rise to a very rich cultural tradition, he regrets that it is no longer that young and proud country of helping the culture that gave scholarships to young people to come to Europe. "In all parts of the world that support has been reduced. We depend more on private donations. And in that the Americans are unbeatable, they have a lot of wealth. In LacMus a third of the budget comes from American friends. Amazing."

For Lortie, the fact that the Francophone language and culture has been preserved in Montreal has to do with the territory. "It's vast, so you can maintain your culture. Surely being in a small territory, Francophones would have disappeared. But Quebec is three times the size of France!"

After having recorded fifty albums, what is left for you to investigate?

There is always something more. For example, Russian music, which I haven't played that much of and which I've just been researching during the pandemic. This year I'm doing a Scriabin album. And I think I'll do another Rachmaninoff. On the other hand, I'm going to do Bach but also with the organ and the harpsichord. It will be an album that combines the three instruments".

When he decided to go for Russian music, Russia exploded...

"Indeed. The truth is that half of the brilliant pianists come from the East, especially from Russia. And also from the Ukraine. To give an example. This summer we have done a Scriabin marathon in class: his ten sonatas in two concerts. But there were cancellations and I was looking for someone who could do the 8th Sonata. On YouTube I saw this Ukrainian girl, an unknown who played it wonderfully. And it was arriving, putting her hands on the piano and checking that all the orchestral color was there. They have a amazing piano school.

What is the secret?

"They told me that it is because when they have the gift, even if they are still at the early age of six or seven, they immediately go to special school. We don't have that special training in the West. Music education here is very poor. that those kids have 14 to give them this training, and it's too late. When you have a special talent you have to act immediately because the neural connections to play an instrument are produced very soon, "concludes the musician.