The penultimate chapter of the legal case against Miren Larrion has been closed this Tuesday, once a court in Vitoria-Gasteiz has informed the former leader of EH Bildu of the conviction for having supplanted the identity of a party colleague, whom he stole the wallet and used his ID to open a checking account. 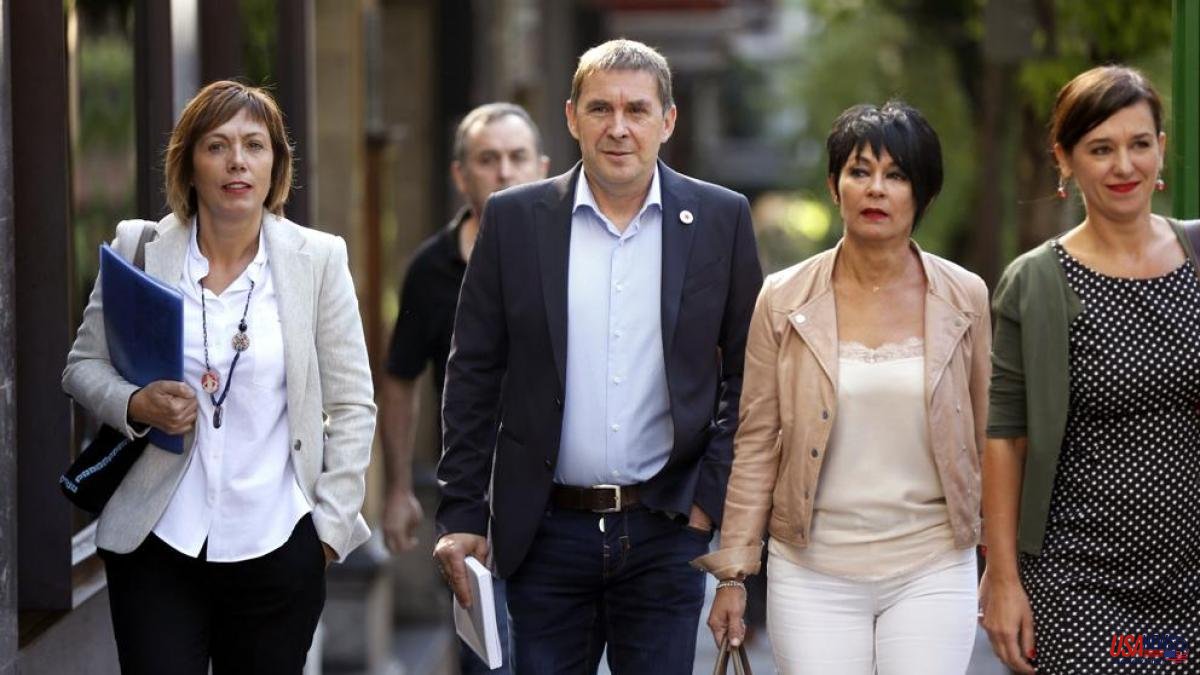 The penultimate chapter of the legal case against Miren Larrion has been closed this Tuesday, once a court in Vitoria-Gasteiz has informed the former leader of EH Bildu of the conviction for having supplanted the identity of a party colleague, whom he stole the wallet and used his ID to open a checking account. The former leader of the abertzale coalition in the Alava capital has been sentenced to three years in prison, disqualification from running for office, a fine of almost 3,000 euros and the payment of a symbolic compensation of 50 euros to the victim.

Now, the last chapter of this unlikely story will close once the court decides whether Larrion goes to prison or if, on the contrary, his entry into a prison is replaced by community work, as agreed with the Prosecutor's Office. The defense of the former nationalist leader, not in vain, agreed with the Prosecutor's Office to accept the commission of three crimes (minor theft, usurpation of civil status and false public document) in exchange for the prosecution not opposing that substitution from entering prison for community work. The last word, in any case, will have the titular judge.

Miren Larrion herself announced a month ago that she had reached an agreement with the Prosecutor's Office, in a message in which she linked what happened to mental health problems. The sentence itself includes the "analogical attenuation of psychic alteration" and indicates that she suffered "an acute stress disorder and generalized anxiety disorder that affected her volitional and intellective faculties", although it also indicates that she maintained the "sense of reality ”.

“In my case there have been many and many of you who intuited that mine was a mental health problem. There are quite a few of you who had somehow experienced something similar and could identify it. I cannot put into words what each of the gestures you have had has meant”, said the former leader of EH Bildu in Vitoria-Gasteiz and one of the most promising figures in the coalition last April.

In the same letter, he pointed out that the first episode he was accused of, the theft of the DNI of a colleague of EH Bildu and the subsequent opening of a current account supplanting her identity, were "in addition to an error, a cry for help".

The sentence, on the other hand, speaks of "a preconceived plan" for the "contracting" of services without the "knowledge, consent, or intervention" of the victim. In any case, the sentence does not make clear what was the ultimate goal of Larrion's actions. Why would a university professor and mother of a family, with a successful political career, get into such a mess?

At the time, there was speculation of an attempted vendetta against a colleague with whom she did not have a good relationship, although it is not clear in what sense it was going to harm her beyond a minor theft (of 50 euros). Once Larrion's statement was known, a month ago, she pointed out that what happened had to do with the health situation, from a mental point of view, that she was going through.

The facts for which Larrion had been prosecuted and that the sentence considers proven date back to December 2020. On December 22 of that year, Larrión stole his partner's wallet, while he was inside the EH Bildu headquarters in Vitoria-Gasteiz. According to the victim of the robbery, inside it there were 50 euros, her ID, two bank cards and various documentation.

From there, Larrion would have operated with that documentation. In January he set up a prepaid telephone line, opened a post office box and, finally, opened a bank account posing as his partner. In the same account he would enter, already in the month of February, 300 euros.

Larrion's movements, however, did not go unnoticed by the branch director, who recognized the former leader and realized that she was impersonating a colleague's identity. The sentence indicates that the convicted person altered her physical appearance to undertake this impersonation of her identity, curling her hair, using glasses similar to those of her partner and using the mask to hide the identity of she.

On February 22, 2021, Ertzaintza agents detained him at the exit of the branch where he had operated, so that he could offer an explanation about the suspicious movements that the entity itself had detected.

That same day, EH Bildu announced Larrion's resignation due to "personal facts that violate the code of ethics" of the coalition. The EH Bildu leader herself would admit the facts hours later and pointed out that she had “made a mistake”. "In a difficult personal moment I have looked for a solution that was a mistake from the beginning: I have opened a checking account with a colleague's card, in order to enter some money if I saw it necessary in a moment of trouble", she explained .

In the following weeks it became known that the holder of the DNI was an EH Bildu advisor in Álava with whom she did not have a good relationship and who believed she had lost her wallet at Christmas, weeks before Larrion opened an account using her documentation.

The holder of the DNI learned through a bank circular that an account had been opened in her name, so she denounced the facts. Once she learned that Larrion had opened the account, she tried to withdraw the complaint, although she gave up once she learned that the investigation would continue ex officio.

Doctor in industrial engineering and university professor, Miren Larrion entered the political arena in 2012, at the hands of EH Bildu. In 2015 she was the head of the list of the abertzale coalition in Vitoria-Gasteiz, where she managed to be the second most voted candidate, only surpassed by the popular Javier Maroto.

The coalition rewarded her good results in the Alava capital by awarding her first place on the list for Álava in the 2016 Basque Parliament elections. During the electoral campaign she had a huge role, becoming the candidate who participated in the debates in Spanish with the rest of the candidates for Lehendakari (he shared the spotlight with Maddalen Iriarte, current parliamentary spokesperson, who participated in the debates in Basque).

In 2019, she repeated as a candidate for mayor of Vitoria-Gasteiz, although then she failed to meet the expectations that had even placed her as the first force. In September of the same year she left her seat in the Basque Parliament to focus on municipal politics.

Although in the months prior to her departure from politics she lost prominence within the coalition, Larrion had been considered, especially between 2015 and 2019, one of the leaders with the greatest projection in EH Bildu. Heterodox, open-minded, trained and committed to respecting human rights (his last public act was to participate in the tribute to Fernando Buesa and Jorge Díez Elorza, assassinated by ETA), Larrion abandoned politics a year ago through the door of back to return to university.

With the judicial process closed, the ultimate motivation for the events that ended Larrion's political career, between December 22, 2020 and February 22 of last year, remains unknown.

In his last message on Facebook, he pointed out that his "return trip is not over".

“And at a time when mental health issues are so widespread, I want to emphasize the importance of every gesture. Recovery is not an act, a moment, but a lot of small changes. And those gestures help to reinforce them (…). My return journey is not over but I am closer to my next destination. There are many more travelers. Every little gesture we make will make that lap a little easier. Each message she manages to get through will make it a little easier. Let's make that path by walking, ”she indicated.