Thousands of people demonstrate in Barcelona against linguistic immersion in Catalonia

Thousands of people - 2,800 according to the Urban Guard and 200,000 according to the organizers - have demonstrated this Sunday in Barcelona, ​​called by the "Escuela de Todos" platform, to ask that Spanish be the vehicular language in the Catalan educational system, a march in the one in which prominent leaders of the PP, Ciudadanos and Vox participated. 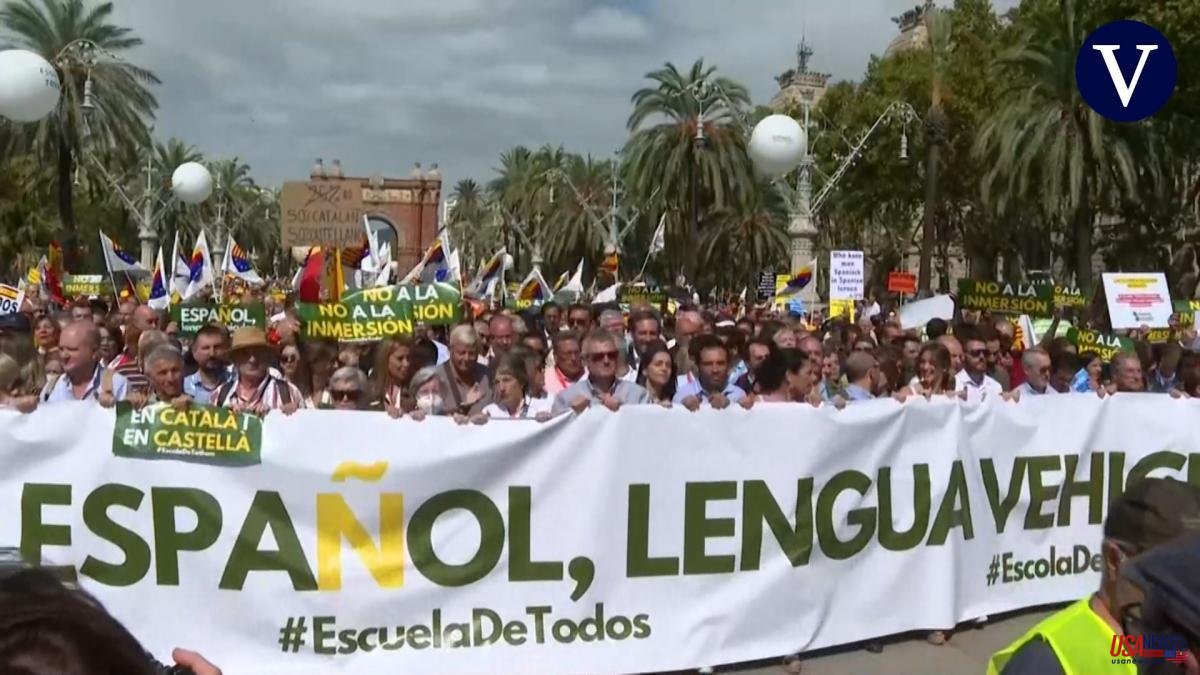 Thousands of people - 2,800 according to the Urban Guard and 200,000 according to the organizers - have demonstrated this Sunday in Barcelona, ​​called by the "Escuela de Todos" platform, to ask that Spanish be the vehicular language in the Catalan educational system, a march in the one in which prominent leaders of the PP, Ciudadanos and Vox participated.

The head of the demonstration, which carried a banner with the motto "Spanish, vehicular language", started from the Arc de Triomphe to go down Paseo Lluís Companys and reach Paseo Picasso, where the final act took place with the reading of a manifesto at the height of Marquès de l'Argentera.

Among the political leaders who have attended the demonstration are the general secretary of the PP, Cuca Gamarra; the president of Cs, Inés Arrimadas, and the president of Vox, Santiago Abascal.

In addition, other regional political representatives have also attended, such as the leaders of the PPC, Alejandro Fernández; of Cs in Catalonia, Carlos Carrizosa; from Vox in Parliament, Ignacio Garriga; and the leader of Valents and councilor in the Barcelona City Council, Eva Parera.

Many of the demonstrators carry banners in favor of bilingualism in Catalonia and against independence, in addition to carrying Spanish flags, while they march accompanied by a truck that moves just in front of the header and that enlivens the act with music.

The demonstration, which began around 12:30 p.m. at the Arc de Triomf under the slogan "Spanish, vehicular language", subsequently moved along Paseo Lluís Companys and Paseo Picasso, until it ended in front of the stage set up in the confluence of Marquès de l'Argentera street.

On stage, the president of the organization S'ha Hacet!, Júlia Calvet, has read the manifesto of "Escuela de Todos", where the "arrogant and permanent disobedience" to the Constitution and the resolutions of which " boasts" the Generalitat.

"Its official status is not a whim or arbitrariness," the platform has defended, which has also highlighted that they continue to work with "firmness and conviction" in the "objective of putting an end to the marginalization of Spanish as a vehicular language."

The president of Vox, Santiago Abascal, has demanded to apply article 155 of the Constitution in Catalonia so that "legality is restored" and has defended that it be maintained for as long as it takes until linguistic rights are guaranteed, he says.

This is how he defended it in statements to journalists this Sunday before the demonstration called in Barcelona by Escuela de Todos to defend 25% of Spanish in schools in Catalonia under the slogan 'Spanish, vehicular language'.

He has branded the Government a "coup mafia that has taken over the institutions with the complicity" of the Prime Minister, Pedro Sánchez, and has accused them of not complying with court rulings.

Asked about the absence of the president of the PP, Alberto Núñez Feijóo, at the demonstration this Sunday, he has attributed it to "some kind of contradiction between being here and the linguistic policies applied in Galicia", although he has said that he respects the decisions of the leaders politicians.

In addition, he has expressed his support "for all Catalans who suffer and see their most fundamental rights trampled on because they do not have the right to have their children go to school in their mother tongue."

((There will be expansion))