Five days after the death of the first pontiff to resign in modern history, thousands of people bid farewell to Benedict XVI on Thursday in Saint Peter's Square. 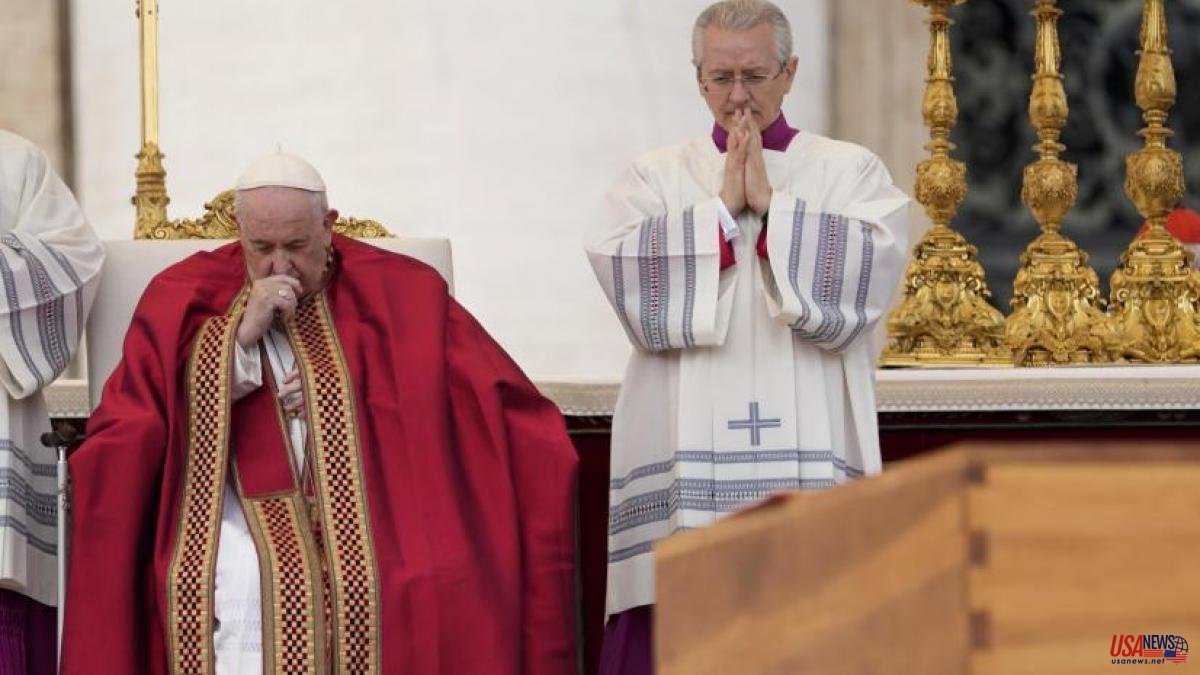 Five days after the death of the first pontiff to resign in modern history, thousands of people bid farewell to Benedict XVI on Thursday in Saint Peter's Square. With the fog still not clearing over the Vatican, the cypress coffin of Joseph Ratzinger has been placed in the heart of the square, with the Gospel on top, for a historic event. It is the first time in more than 600 years that the Catholic Church buries a pope who decided that he did not have the strength to continue leading the institution. In an image that will remain for posterity, Jorge Mario Bergoglio has blessed the coffin of his predecessor for the last time before he entered the crypt of San Pedro to be buried.

In the end, the Vatican has organized a funeral with a liturgical rite that is very reminiscent of a funeral mass for a pontiff, but without the elements that indicate that it is a practicing pope to differentiate him, obviously, from the head of the Government of the Church. The solemn image of this gray Thursday in Rome will serve as a precedent for the burials of the pontiffs who, from now on, decide to follow the example of the theologian and take a step back.

Shortly before nine in the morning, the Ratzinger cypress coffin left to a respectful applause from those present in Saint Peter's Basilica, where it has been watched over for three days by almost 200,000 faithful from all over the world. The ceremony was presided over by Pope Francis but officiated by the dean of the College of Cardinals, Giovanni Battista Re, because the Pope's knee problems prevent him from doing so. So much so that the Pope has had to appear in a wheelchair and go up to the altar on a side ramp.

Some 130 cardinals and almost 4,000 priests concelebrate the mass. In his homily, Francis, referring to Ratzinger, said: "May your joy be perfect in hearing his voice definitively and forever." “We too, clinging to the last words of the Lord and to the testimony that marked his life, want, as an ecclesial community, to follow in his footsteps and entrust our brother in the hands of the Father: may these hands of mercy find his lamp lit with the oil of the Gospel, which he spread and witnessed during his life", Bergoglio assured, before the coffin of his predecessor, before placing his hand on it for the last time.

Faced with the protocol problem involved in organizing the first funeral of a resigned pope, the feeling is that in the end the Vatican wanted to organize a burial worthy of a pope but with a lowered tone, much simpler than that of the imperial John Paul II, following the will of Benedict XVI who wanted a solemn but sober farewell. To make it clear that it is not a reigning pope, for example, the “novendiales”, the nine-day period of mourning that follows the death of a pontiff, have not been declared, and the final readings and pleas have been modified. of the funeral mass. Of course, it is not the first time that a funeral is presided over by another living pope. It already happened in 1802, when Pius VII officiated the funeral of his predecessor, Pius VI, who had died in France as a prisoner of Napoleon.

"It's fine how they've organized it, we don't care because we've come to pray," said a woman, sitting at one end of the square, defying the cold of a gray morning in Rome. Contrary to what happened with the burial of John Paul II, the surroundings of San Pedro, on the Conciliation road, were soulless, with hardly any faithful. According to the Vatican gendarmerie, some 50,000 have attended the ceremony, a lower turnout than expected. It was not necessary to have a ticket to access, just pass some tight security controls. At the entrance, some volunteers gave away souvenirs of the designated day. Compatriots of the German pope have arrived with flags from Bavaria, his native region. Others carried banners that read "Thank you, Pope Benedict" or "Santo Subito." As the coffin left the square, some pilgrims have shouted this Italian expression to ask for a quick canonization, as happened at Wojtyla's funeral.

As it is not a state funeral, the only delegations that have been officially invited are those of Germany, the Pope's native country, and Italy, his host country. However, three monarchs attended the funeral in their personal capacity –among them Queen Sofía, who was in the front row, and briefly greeted the Pope–; heads of state such as the president of Poland, Andrzej Duda, or that of Portugal, Marcelo Rebelo de Sousa; and prime ministers like the Czech Petr Fiala or the Slovakian Eduard Heger. On behalf of Spain, the Minister of the Presidency, Félix Bolaños; the ambassador to the Holy See, Isabel Celáa; and the president of the Spanish Episcopal Conference, the Cardinal Archbishop of Barcelona Juan José Omella. The Belgian kings, Felipe and Matilde, have also been seen.

After the mass, the papal tradition was followed and the cypress coffin was placed in two other coffins, before being entombed in the same empty tomb in the Vatican crypt that was occupied by his admired predecessor, John Paul II, before his his beatification in 2011. Like all popes, Ratzinger has a triple coffin: cypress, zinc – which will be sealed and welded – and oak. Inside it will be placed the medals and coins minted during his pontificate, in addition to the canopies he wore during his ecclesiastical career and a text describing his papacy, in Latin, inserted in a metal cylinder. On his tombstone will only be written his name and the brief time that his pontificate lasted, seven years, ten months and nine days, less than his placid retirement in the Mater Ecclesiae monastery of the Vatican gardens, for the one he will be remembered for.