This is the era of Cheptegei: he retains the throne of the 10,000 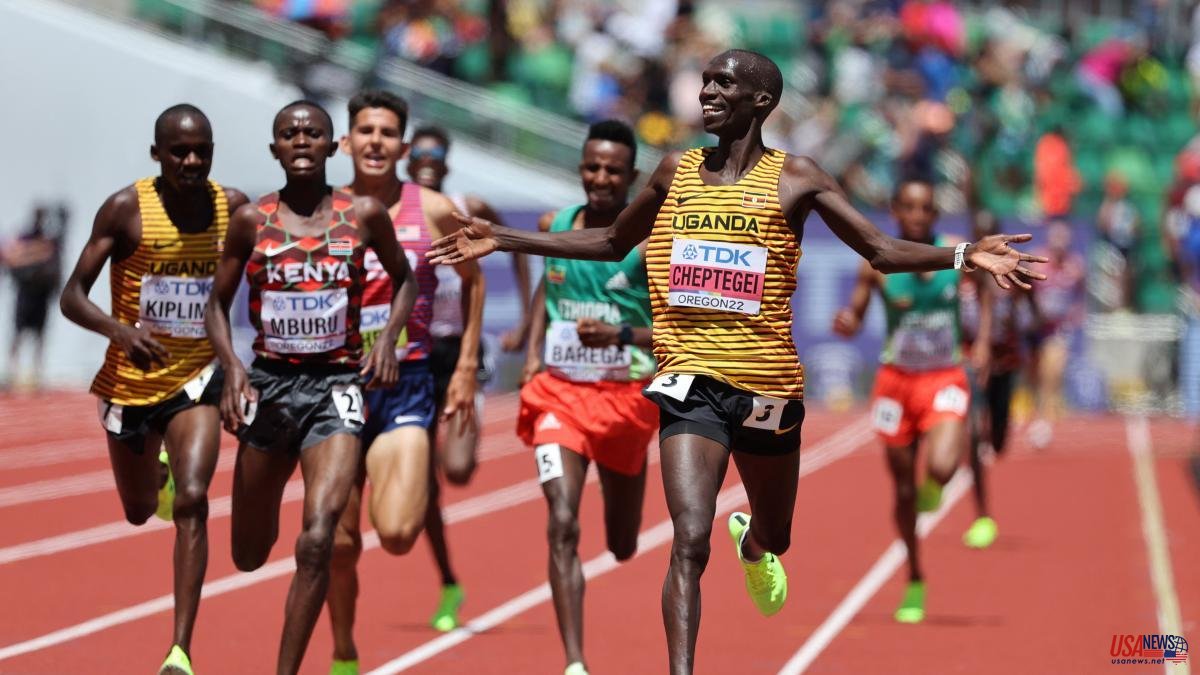 The tread is a pleasure, bring us these trails!

Like gazelles, the light Africans walk the tracks of Steve Prefontaine, the legend of the American background who, back in the 60s and 70s, had lived very fast, as fast as he moved on the tartan, and had left life very soon , crashing his sports car against a rock.

Prefontaine -mustache and long hair in the wind, Beatle look in shorts- had left us a deep sports and aesthetic legacy, a story that has filled books and biographies and has inspired the line of Nike, the multinational that flies over the world of sports in general and athletics in particular.

It's all Prefontaine in Eugene: the mythomaniacs visit the scene of his death, not far from the University of Oregon - you can walk there in a quarter of an hour - and leave flowers and kiss the monolith.

The image of Prefontaine, a front runner who blew up the races, decorates the sportswear stores of the University of Oregon.

This is all very well, but the African long-distance runners pass it by. This is the time of their morning run, they are more aware of other things.

For example, from your opponents.

Walking through the forests, the Ugandans, phosphorescent yellow (with the tall Joshua Cheptegei among them), meet the green Ethiopians (with the little Selemon Barega who looks down) and the red Kenyans (Rogers Kwemoi, smaller even than Barega), and none of them say anything to each other and in reality they are saying:

-See you Sunday at noon at Hayward Field.

(Hayward Field is a little further, half a kilometer away)

And up to here.

Now the Ugandans pass by, with Kiplimo and Cheptegei in command of the operations, and Barega, the Ethiopian Olympic champion who does not appear on social networks and, when asked, answers in monosyllables, also pokes his head.

(Barega may win medals, but he doesn't have Prefontaine's charisma)

They don't go fast, not at least by their standards (they pass 5,000 in 14m01s), and that's why Kiplimo gets nervous and the group, round like an O, stretches like an accordion and draws an I.

Kiplimo and Cheptegei take turns, the yellow Ugandans have organized, and now they have to survive.

Now comes the Kenyan Mateiko, who tries his luck.

I have come to defend my title.

Cheptegei wants to talk about his book, not Prefontaine's book.

(Cheptegei is not interested in Prefontaine; he is interested in the legacy of Gebrselassie, Bekele or Farah, who chained titles from the distance, one after another)

And yes, Cheptegei has it all.

And confident in himself, Cheptegei bursts into the bell in 26m34s and grabs the rope and forces Barega, who has to open up and wants to pass but can't. And so all Africans appear in the straight, exciting battle between Ugandans, Kenyans and Ethiopians. The background is yours!

And Cheptegei holds his own and recovers the 10,000m scepter, a distance he had delivered last year, at the Tokyo Games, and finishes the last lap in 53s (the last thousand has been run in 2m25s), ahead of the Kenyan Mburu, the Ugandan Kiplimo, the American Grant Fisher and the prone Barega, overwhelmed by so much change of pace, who finished fifth, in 27m28s38, four tenths off the podium.

Ethiopia closes this first battle badly wounded. He leaves without medals, something that has only happened a couple of times since 1991 (in 2015 and 2017), and Carlos Mayo finishes 13th, in 27m50s61.

I am very happy with what I have done. If I have put myself in front it has been to be more comfortable, not to let myself be seen or anything like that -Mayo says goodbye.