Its completely transparent folding front door that opens vertically could remind us of a kind of spaceship. 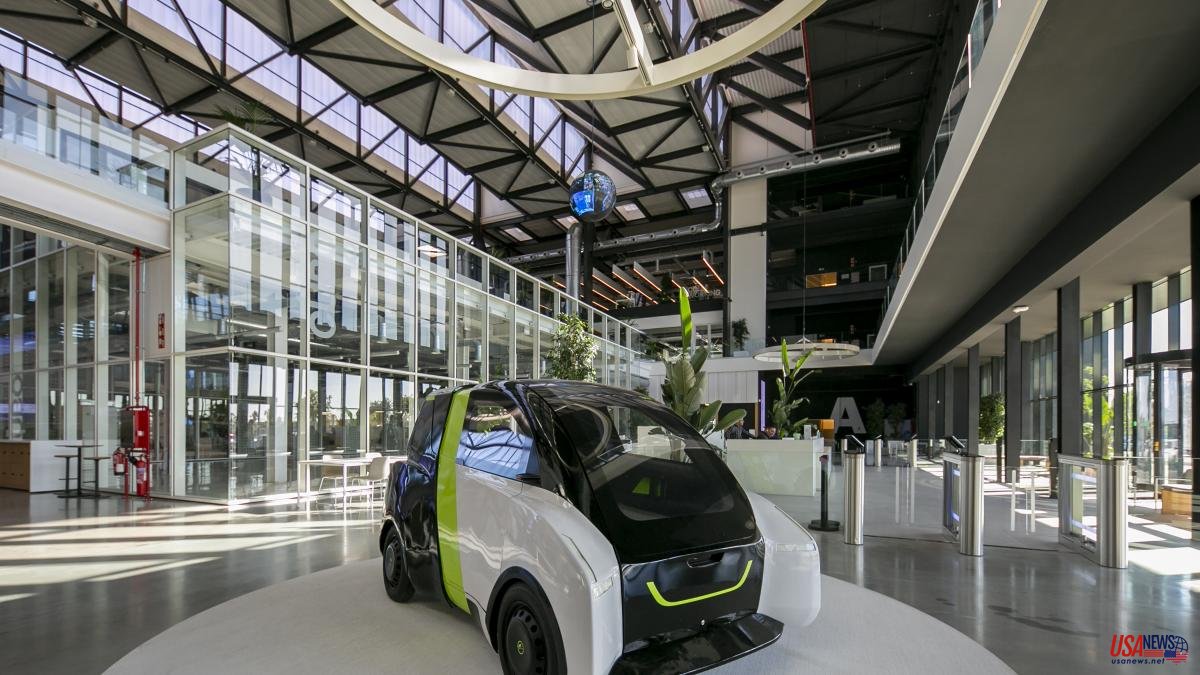 Its completely transparent folding front door that opens vertically could remind us of a kind of spaceship. Also its shape, rounded at the front, compact at the back. But this is not, by far, the most futuristic of The e-Miles, a 100% electric (heavy) quadricycle, whose components, interior and exterior, have been manufactured, attention, with 3D printers.

The second thing that impacts: “its body can expand and go from 2.5 meters in length with two seats to 2.9 meters with four seats (or two seats with two cargo spaces). Due to these small dimensions, it can be parked perpendicular to the sidewalk. And the third thing: it does not have a steering wheel or pedals, but rather it is driven with a joystick like the one in airplanes”, explains Mike Hastewell, founding partner of The Malena Engineering, engineering company that conceived the e-Miles concept, and The e- Miles Company, created with the birth of this quad to accommodate future partners, both suppliers and investors.

From the outside, the front access allows entry to the cabin on foot and also with a wheelchair. There is no wiper: the front glass repels water, mud, dirt. Inside, such minimalism reigns that there is not even a glove compartment. Just a large 23-inch central screen that serves as a control center for the environment in which we are moving and that is connected to our smartphone, for example, to see the indications of the Google maps app. The mirrors have been replaced by cameras that show the image captured on that large screen.

The fact that it can be driven without a steering wheel, thanks only to a central joystick, allows it to be controlled from both the left and right seats, if, for example, you are left-handed (finally a car designed for us) or you drive for another country. In addition, to get on it you only need to be 16 years old (thanks to the new B1 driving license). Due to its condition as a quadricycle, it will have a maximum speed of 90 km/h and the autonomy could be around 70 km.

Similar to other existing vehicles, this emission-free quadricycle is designed to make urban mobility sustainable and practical, be it personal, shared or the last mile, in accordance with the requirements of the 2030 Agenda, 17 Goals with 169 goals interrelated, spanning the economic, social and environmental spheres.

Precisely, at the last Climate Summit (COP27), held at the beginning of November, a study published in the journal Nature Climate Change was made public, stating that the countries' current climate commitments are insufficient to maintain the objective of the Paris Agreement. and that, if emissions are not curbed, the world will exceed the desirable limit of 1.5 ºC in the coming decades.

Road mobility represents almost 95% of emissions in Spain, according to data from the Ministry for Ecological Transition. Hence the importance of implementing an alternative to combustion vehicles. In addition to zero emissions driving this electric, the manufacturing process with 3D printers also reduces them, because it avoids the industrial machinery used in the production of fuel-powered motor vehicles. Only the tires, the seats and the electric minimotors, housed in the wheels, are manufactured, for the moment, following the traditional processes.

We said that one of the most disruptive features of the e-Miles was that it had come out of a 3D printing machine (90% of its components). This marvelous rarity has been possible thanks to the fact that one day its creators decided to settle in DFactory, the new industrial and technological hub of the Consorci de la Zona Franca de Barcelona, ​​and found advice on 3D from Leitat and printing machines from Windforce, other two companies that had established themselves in that pioneering space in Europe.

"The idea is that here not only companies that did not know each other are known, but also work on joint projects related to artificial intelligence, robotics or 3D printing," explains Pere Navarro, State delegate to the Consorci. "With these synergies, we want to change the Spanish industrial fabric, support companies during their digitization process and turn Barcelona into the center of 4.0 innovation in southern Europe." The DFactory project consists of a 17,000-square-meter warehouse that has already been built, which is expected to generate some 1,500 direct jobs, and a second 72,500-square-meter plant, which is expected to create some 5,000.

In the middle of next year we will already be able to see the e-Miles circulating through our streets. How? One of its imminent applications is going to be in the last mile. INTER IKEA is interested in testing the e-Miles e-mobility concept as part of its 'Future of Urban Mobility' project.

Yes, we will have to wait a little longer for a regulation in this regard to see “the total autonomy of e-Miles, which with just a voice command will take us to our destination, in accordance with the city's traffic lights”. But for individuals who want to get on this quadricycle, the next step will be the manufacture of the e-Miles utility version for shared use or for sale. The price will range between 14,000 and 17,000 euros.