“This is a war of holy Russia against the godless West”

He knows very well Vladimir Putin and Kirill, the patriarch of the Russian Orthodox Church. 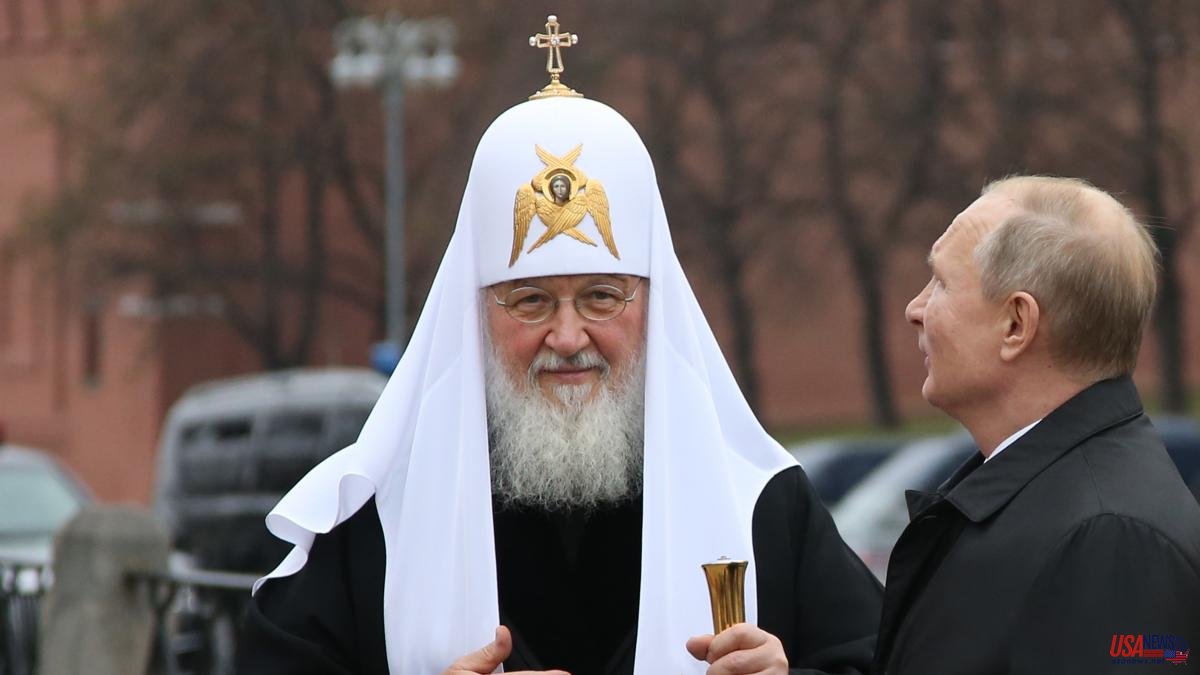 He knows very well Vladimir Putin and Kirill, the patriarch of the Russian Orthodox Church. He was his personal secretary for ten years, between 2002 and 2012. He is Father Cyril Hovorun (Zolotonosha, Ukraine, 1974), archimandrite, professor of theology at University College in Stockholm and an authority on the Orthodox churches. Kiril has filled the post-Soviet ideological vacuum and has allied himself with Putin, he explains. For this reason, the war in Ukraine is nothing other than the one waged by "holy Russia against the impious West", he affirmed during the meeting held with La Vanguardia in Barcelona, ​​where he attended the I International Congress on Religious Freedom and Conscience of Blanquerna, Ramon University Llull.

She was Kiril's personal assistant when he was not yet a patriarch.

Yes, he was, so to speak, the foreign minister of Patriarch Alexis II. Kiril was the mastermind behind all the transformations of the Russian church, including the recovery of its public space, which began with Yeltsin and continued with Putin. I started working with him when, already close to power, he was thinking about new forms of existence and function of the Russian church in the Russian public space and he came up with the idea of ​​promoting an ideology that would serve as a guide. Russian society was fragmented and remains highly fragmented. It needed some kind of cohesion, some kind of staple, and indeed Kirill coined this word, to be the spiritual staple for Russian society to hold together.

Exactly, for Russia, a very simple Make Russia great again. He professed a kind of exceptionalism, not unlike American exceptionalism: that Russia has a central role to play in human history and that she is appointed by God to save the world, so to speak. That was the idea that Kiril promoted in the Russian world and Russian civilization. My job with him was to provide him with new ideas and to test and critique his own. He was open enough to allow the people around him to criticize him. But I was scared when I saw this idea developing in his inner circle. So I started criticizing her. I tried to persuade him that I was wrong and that he was in danger. He didn't listen to me, so I just decided to quit. I wrote my last memorandum to Kirill on this ideology of the Russian world in February 2012. This war is the natural continuation of what was happening ten years ago.

Kiril took advantage of the ideological vacuum caused by the fall of the Soviet Union and the patriarch built the ideology that Putin now espouses.

Exactly. Kiril was always anti-Soviet, although he had to collaborate with the regime when he was younger. And it's interesting that the same applies to Putin, because Putin, even though he was a member of the Communist Party when he was a young KGB agent, I think he was disillusioned in the end. Putin thinks that things that have been corrupted cannot be revitalized, which is why he felt as president that the Russian people needed some kind of ideology similar to communism but not communist. The point is that he could not produce any kind of replacement for the communist ideology. Kirill yes. He built one that combines the elements of the old Russian imperial ideology, of the Romanovs, with some elements of the communist one even though he hates it. And some elements of orthodox Christianity. It is a combination of different elements from the past and Kiril managed to glue them into one for Russian society. And Putin accepted it. He realized that this could work as an instrument of cohesion.

Who depends on whom?

They depend on each other. Kiril needs Putin's resources like money and power, and Putin needs Kiril's ideas. Putin is really a limited man with a very limited mind. He couldn't think big. Kirill yes. Essentially Putin started thinking like this after getting involved with the church and giving him the big ideas. And it is with these ideas that Putin now thinks in cosmic terms, as a person of universal significance and a special mission from God who sees the West as the embodiment of global existential evil. That is why he wants to purge this evil from the face of the earth. And that's why I think he is serious when he threatens the West with nuclear bombs, because for him the West is evil incarnate. And that evil cannot repent. You can't change it. You can only delete it.

I think so. It's not just a bluff. Of course he's lying and he's trying to blackmail the West, but I also think deep down in his soul he's like, 'well, why not?' Because he exactly has this worldview that was instilled in him by the church that he's fighting global evil that is embodied in the West, and he protects global goodness, which is embodied in Russia.

A war of holy Russia against the godless West?

Exact. And this is the language used.

And also Orthodox against Orthodox?

Yes, because they believe that the Russians are the true Orthodox while the Orthodox in the Ukraine are corrupt; have been contaminated.

Are the rest of the Orthodox in the world also the devil?

Kiril is still quite down to earth, but for many Kiril supporters, the Catholic Church, for example, is Russia's worst enemy. They believe that it is the war of a globalist West led by the Pope – imagine this Pope leading the West… – trying to invade Russia and eliminate Russian tradition, Russian values. It's a crazy idea, but that's exactly how they think.

And how do you explain the good relationship between Kiril and the Pope?

Kiril is a controversial figure. If you try to identify a program consistent with it, it doesn't have one. That's why I think he still likes the Catholic Church as an institution, not particularly this Pope. For the Russian Church, the Catholic Church is a model, although not the modernized one of Vatican II, but the medieval one.

In this crusade there are some links with politics and evangelical movements of the right in the US and Trump. Is this a culture war in the end?

Yes. First, the Russian Church maneuvered to attract US evangelicals. Not all, but some leaders, like Franklin Graham, decided to ally with the Russians. Pope Benedict stayed away from this offer. But some evangelicals accepted it and allied themselves with the Russian Church. And it is interesting that these evangelicals are also very critical of Francis and allies of conservative Catholics in the US like Cardinal Raymond Burke and other anti-Pope Francis. They now form a kind of alliance that I would call unholy. They are pro-Putin evangelicals, anti-Francis Catholics, and the Russian Church. And this is a very interesting combination. They certainly share his vision for the US, Russia and Francis. And yes, indeed, America is devastated by the culture war. It really is fragmented and divided. And while Kirill's rhetoric and Putin's rhetoric is anti-American, they embrace this idea of ​​culture wars. The difference between the American culture war and the Russian culture war is that in Russia it has already led to war, real war. In Russia they imagine this war as a holy special operation against the godless West, but it is also a global crusade of the conservatives against the liberals. They believe that the Ukraine has been taken over by the liberals and they need the Ukraine to be liberated from the liberals. And this is exactly the rhetoric of the culture war in the US.

We start by talking about Make Russia great again. of Russian nationalism. Now we talk about culture war, much deeper. So is there a solution?

That amounts to answering when the war will end and what will happen next and, well, in Ukraine and myself, a Ukrainian, I also want Putin to leave as soon as possible, to die as soon as possible in the hope that he will end the war . That would at some point end the conflict, but not the reasons that lead to war. The problem is that the roots of this war will remain even after the war is over. That's why I think it's very important to address their real reasons. And I think the real reason is ideology. The ideas. You can stop shooting guns, but if ideas stay where they are, war will happen again. So imagine that Putin is gone. What will the Russian people do? They will re-elect a new Putin and then another and then another and will want to start war again and again unless they are provided with counter-narratives to what they were led to think of in terms of war. Russia has been extremely effective in providing this narrative through the media and it really succeeds in indoctrinating people even in the age of pluralist ideas and pluralist media, because the Russians have access to the Western media even though the Russian government tries to block them.

Basically the situation needs to not only produce an opposing narrative, but deconstruct the narrative that is important to the Russians; deconstruct propaganda on the basis of the theology of religion. Theology was used and abused to construct Russian propaganda, Russian narratives of the war, and theology can also be used to deconstruct it. Therefore, I believe that the Russians cannot be changed on the basis of secularism alone. We are essentially talking about a process of deep denazification, something similar to what happened to Germany after World War II. I call this process deputinization of the Russian psyche, of the Russian soul, and in this process of deputinization, theology can play a leading role, as can the group of specialists in the German churches behind Deutsche Christen, who supported the Nazis . Theology was used to deconstruct this Nazi theology. I think it is a task for our generation to deconstruct this Russian ideology in the same way because that is the only way to really eradicate the reason for the war and prevent it from happening again.

This goal may take years.

It is not immediate and of course it will take years, but this is the only way to prevent it from happening again.

Should Putin and Kiril himself disappear?

Well, the moment Putin leaves, Kiril will also leave, apparently. But the ideas will remain. That's the problem.