Dozens of people summoned by the Baix Maresme Housing Network have stormed this Tuesday in the extraordinary meeting of the Premià de Dalt (Maresme) City Council that was supposed to approve the fiscal ordinances for the next year. 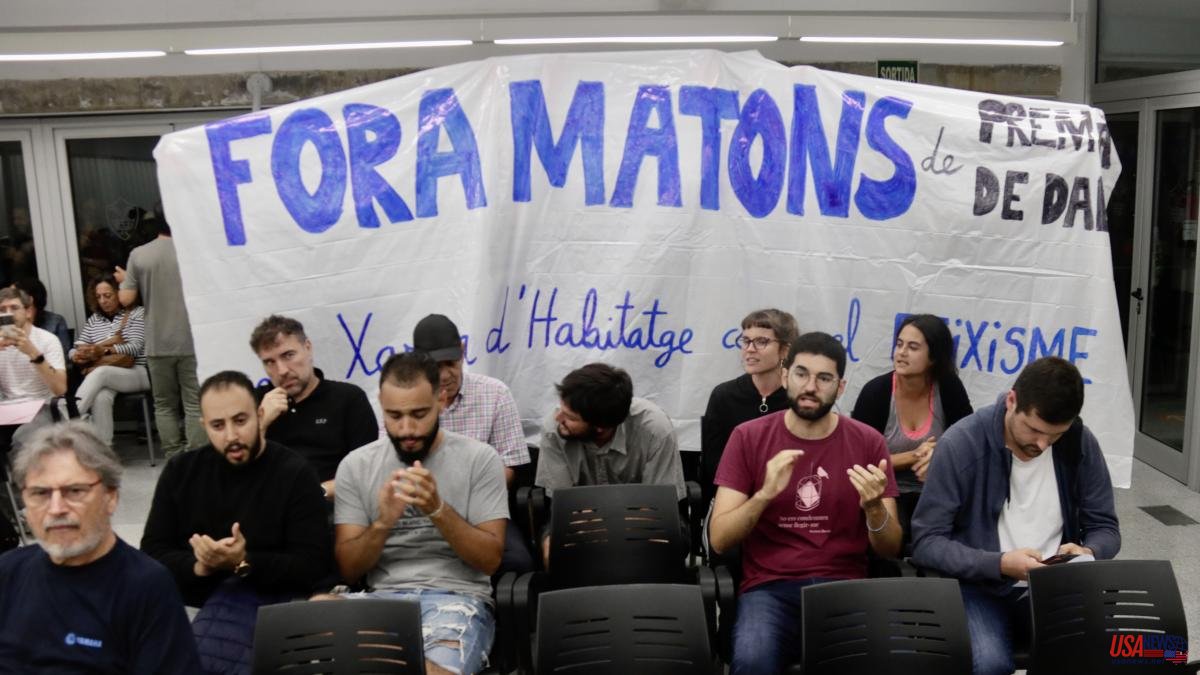 Dozens of people summoned by the Baix Maresme Housing Network have stormed this Tuesday in the extraordinary meeting of the Premià de Dalt (Maresme) City Council that was supposed to approve the fiscal ordinances for the next year. The protest was against the contract that was signed last week with the company Desokupa for the advice of the Local Police in cases of "mafioso" employment.

The concentration has been carried out despite the fact that the parties, after great social pressure, have warned that the contract will be terminated. The shouting has forced the mayor, Josep Triadó, to suspend the session, which was held minutes later behind closed doors when the protesters moved the protest to the street.

The Xarxa de Vivenda del Baix Maresme regrets that the council has wanted to establish deals with a company that has "links with the extreme right" and that has accumulated several legal proceedings for its "violent and mafia" methods when it comes to recovering properties that have been busy.

Despite the rectification of the municipal government, which has already begun the procedures to reverse the contract with Desokupa, the group has maintained the concentration to show their discomfort with what they consider to have been a "political propaganda action" by the mayor.

"How dare a city council make a contract with a company directly linked to criminal acts?" exclaimed the group's spokeswoman, Emma Puig. In addition, she believes that the termination of the contract is only a response to media pressure and believes that "the relationship with the company of thugs will not end."

The controversy in Premià de Dalt broke out last Wednesday, when the City Council announced the contracting of Daniel Esteve's company for the advice of the Local Police of the municipality before occupations that were considered "mafia". The contract, signed for one year, was at a rate of 3,000 euros net per year.

The mayor, Josep Triadó, assumed that he would receive "media sticks" for the fame accumulated by Desokupa throughout his career, but he preferred to put forward what he considered to be good for the safety of his neighbors. Criticism even came from the president of his party, Laura Borràs, and also from the PSC at the county level, with whom he shares government.

At the municipal level, the opposition also spoke out against it, and both the ERC and the Crida de Premià de Dalt called for the termination of the contract with the company. The pressure had practically immediate consequences and in just three days the procedures to undo the contract began, by mutual agreement with Desokupa.

However, the break with the company is not total, since the company has now offered free advice, if the City Council considers it appropriate. From the City Council it is explained that it will be the Local Police who decide if they need this external help in case of jobs and, if this happens, the advice "will be requested from Desokupa".