The world surrenders to Carlos Alcaraz: "It's like trying to contain an ocean"

At just 19 years old, the name of Carlos Alcaraz travels around the world. 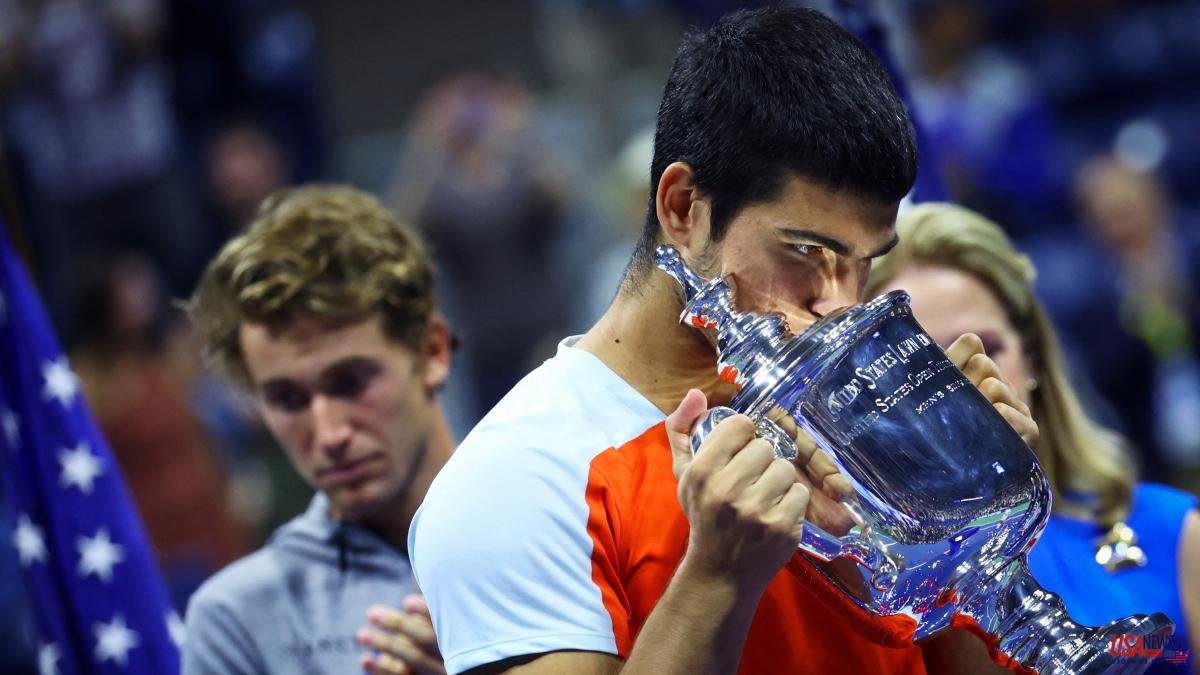 At just 19 years old, the name of Carlos Alcaraz travels around the world. His triumph in the final of the US Open against Casper Ruud and the consequent rise to number 1 in the ATP ranking have caused innumerable praises, of all kinds, for the Murcian, whom practically all the media see as the king of tennis for many years.

"The future of tennis arrived at 7:38 p.m. (1:38 a.m. in Spain) The Carlos Alcaraz era is here," concluded the New York Times after the victory of the man from El Palmar on the Arthur Ashe court in New York, before almost 25,000 people. "It's like trying to contain an ocean," adds the prestigious American newspaper in the party chronicle

Even higher is the explanation that USA Today finds to define the young Spanish tennis player: "It should not have been possible to combine the offensive shots and creativity of Roger Federer, the relentlessness and mental strength of Rafael Nadal and the supernatural speed and resistance of Novak Djokovic in one body. But when they created Carlos Alcaraz, the rules obviously didn't apply. When Alcaraz retires, he may have made us rethink everything about what greatness looks like."

In England, the cradle of tennis, they don't see the roof of Alcaraz either. "He has given the world a full display of his talent and potential, and there seems to be no limit to what he can achieve next," looks to the future The Guardian, while The Times looks back to a moment in the past to gauge his breakthrough: "Nadal's win at Roland Garros at the same age was a seminal moment for the sport, and it felt the same way inside Arthur Ashe Stadium last night."

Precisely in the land of Roland Garros, in France, the newspaper L'Équipe plays on words taking advantage of the origin of Spanish. "Carlos Alcaraz, a Murcian on earth," headlines the renowned Gallic newspaper, changing from a Martian to a "Murcian" to explain the greatness of the young tennis player. In Italy, they do not skimp on praise either and La Gazzetta dello Sport assures that "Carlitos has become a tennis machine".

Also in Australia, a country with a great tennis tradition and home of the Australian Open, they make a compendium of the virtues that the new phenomenon of racket sport treasures. "Alcaraz is imbued with boundless enthusiasm and energy, not to mention skill, speed, stamina and cold blood," describes The Age.

Obviously, all the Spanish headers have kept a prominent place for Alcaraz, especially the sports ones. "King Carlos I" dedicates its cover to Mundo Deportivo, just like AS or the generalist ABC, which crowns him as "the new king", while Marca opts for another way of emphasizing the success of the tennis player on its cover: "Child, the one you messed up!" For its part, El País headlines "Yes, here is Alcaraz", in addition to defining him as "a troublemaker against monotony", and El Mundo points out that he is "ahead of his time".