The World Cup that Pelé did not want to play 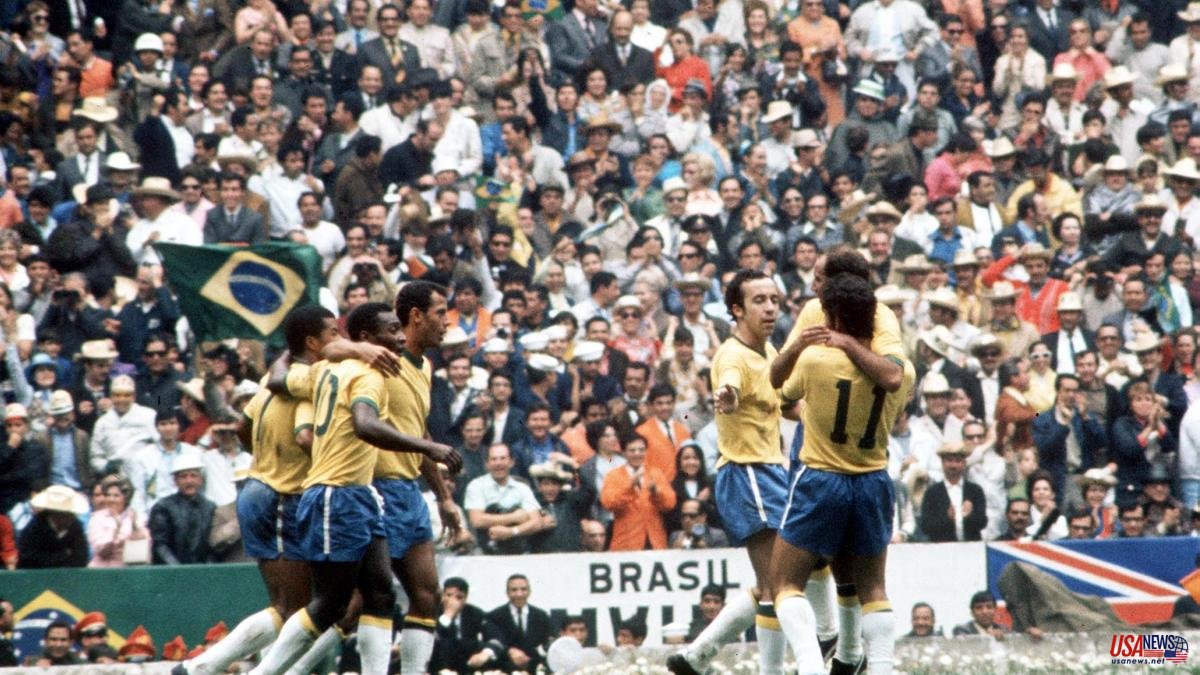 Minute 86. Recovery of Tostão in his own field. Triangulation at the first touch between Clodoaldo, Gérson and Pelé. Clodoaldo (the least skilled forward midfielder) gets around four men before opening up to the left. Long displacement from Rivelino to Jairzinho. Move on to the omnipresent Pelé. O Rei awaits the incorporation of Carlos Alberto on the right-hand side. The ball reaches the captain of Brazil and, with a cross shot, he shoots Albertosi. The Azteca scoreboard reflects an indisputable 4-1 for the verdeamarela over Italy. The fourth goal is the culmination of an extraordinary second half for the Brazilians, a World Cup to be framed, kept in the retina of millions of fans around the globe.

Then Cruyff, Maradona, Messi would arrive... but Pelé was always there before. It is a non-negotiable position for all those contemporaries of the ten from Três Corações who enjoyed live that world champion Brazil in Mexico'70. If Pelé's throne was not in dispute, much less after that choral exhibition commanded by the Santos star. An exhibition that was about to not take place because Pelé did not want to play that World Cup.

The disappointment in England '66 had been tremendous. Before the championship, the Brazilian population (and the majority of fans) took it for granted that the team would return with the Jules Rimet trophy under their arms and thus chain three World Cups. The never seen. They had Pelé, the man of the moment, in the prime of his career (25 years). What could go wrong? However, the team was wrecked. It did not make it past the group stage, a disastrous ending for some footballers who had touched the sky in Sweden'58 and Chile'62. In the decisive game against Eusébio's Portugal, Pelé was in the crosshairs of the rival defense. He was hunted on several occasions and, depleted, he could not perform at the expected level. In the World Cup held and won four years earlier, he could only play the first two games. A tough tackle from a Czechoslovak defender ended his participation. Fed up with injuries, he said England would be his last World Cup.

Pelé spent two years without representing his country. It was not until July 25, 1968 when he put on his shirt again against Paraguay. He scored two goals; one with a direct free kick and another with a header. He always recognized that he was under pressure from the military dictatorship to return, although he assured that he made the decision out of conviction. Those were turbulent years in Brazil. The deprivation of freedoms based on a bloody repression left the country in a very bad place. What better than a World Cup to divert attention if the title was achieved. According to Pelé, nothing belligerent against the regime – rather the opposite – the achievement of the World Cup served to calm things down, at least for a while.

This time no one was arrogant, despite having five midfielders who shone with their own light: Gérson (São Paulo), Rivelino (Corinthians), Jairzinho (Botafogo), Pelé (Santos) and Tostão (Cruzeiro) –who reproach Pelé never having played in Europe, which he was unable to do for most of his career due to Brazilian laws at the time that retained talent, obviate the exuberant quality of the Brazilian championship. The work of the five 10 was by João Saldanha, dismissed three months before the World Cup due to his rebellious character against the dictatorship of Garrastazu Médici and his tense disagreement with Pelé. He wanted O Rei, questioned before the tournament, to play center forward in Mexico, a position that Tostão would end up occupying when Mário Zagallo took over. The rest is history. “That team was a revolution for soccer, the beginning of modern soccer,” recalled the legendary Tostão a couple of years ago in La Vanguardia.

Both Pelé's luxury companion in that attack and the rest of the members of the most brilliant team in history have shown their respect these days. “Simply the greatest of all time”, says Tostão. “I had the honor of playing alongside him. A true genius”, says Gérson. “My senior partner is gone and with that smile, I will keep you with me. You are eternal ”, concludes Zagallo, also a former teammate.