The women of the 4x100 are fifth: something is changing

A couple of years ago, Sandra Myers (61) told La Vanguardia:. 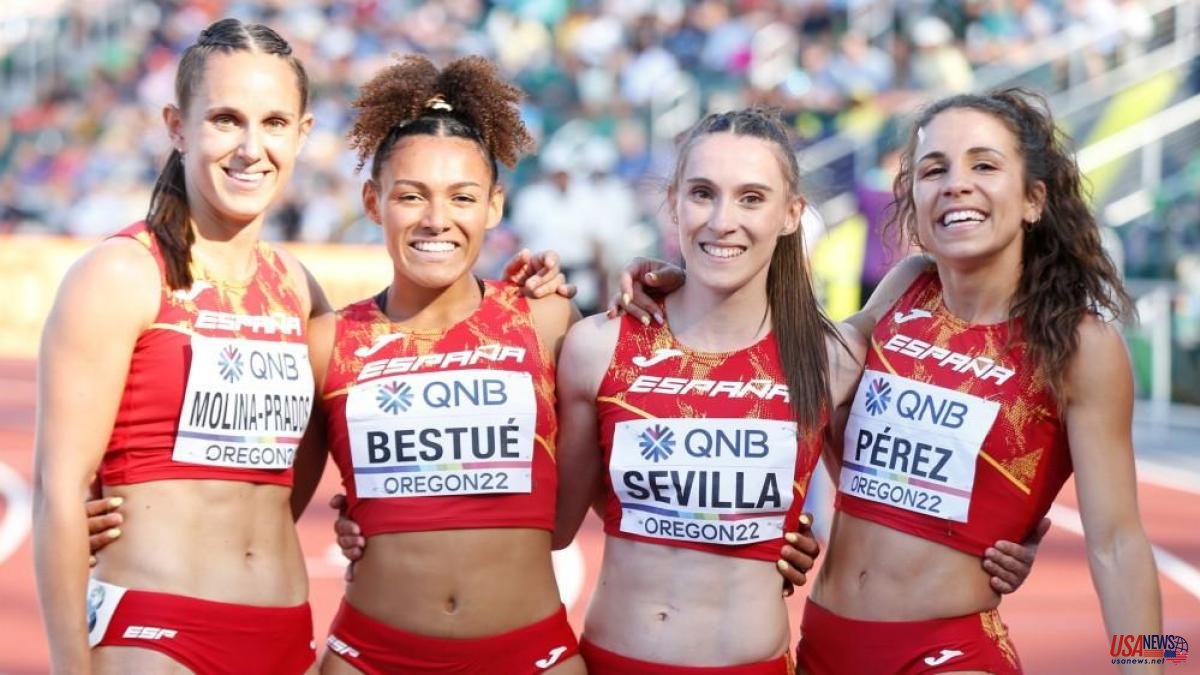 A couple of years ago, Sandra Myers (61) told La Vanguardia:

-The moment of the Spanish sprinters is going to come. They need to believe it. We have to wait.

(Now it is no longer like that: Maribel Pérez is around the shortest record; this year she has signed 11s07, she has been one hundredth of Myers' record)

And that had to wait.

But you also had to work. And change working methods.

Before, in the eighties and nineties, there were hardly any Teresa Rioné, Yolanda Díaz, Blanca Lacambra or Sandra Myers. They were pure sprinters, rare birds in Spain, as it is already known: this has always been a land of long-distance runners and walkers.

"But since nothing came of it, well, none of them believed it," insists Myers.

Until the technicians of the Spanish Athletics Federation decided that it could not continue like this: countries around us have been forming good relay teams. Magnificent squads emerged in Italy, Belgium, Poland or the Netherlands

(British and French feed on the colonies, they eat apart)

-And why there are no Spaniards? - they said in the federative offices.

José Luis Calvo, Ricard Diéguez, Àlex Codina and Toni Puig rolled up their sleeves. They opened the map, searched for destinations. In the middle of the last decade, concentrations around the world intensified. Half a million a year was invested in grouping the athletes. They traveled to Stellenbosch or Potchefstroom, in South Africa. They trained on grass courts, shared a bedroom and a tablecloth for a fortnight.

The results have been coming out over the years. There have been magnificent long relays: the men's 4x400 won bronze at the European Championships in Berlin 2018. And the short relays were also taking shape.

-What are we doing? asks Ricard Diéguez in the lobby of the Spanish hotel in Eugene: nothing exceptional. This is not the 80's anymore. Knowledge is now being shared. We have managed to organize symposiums with 150 coaches from all over Spain. No one keeps what they know anymore, and it's also absurd. There are the videos, the networks, we all know what the person next to you does. And when I look at Americans or Jamaicans, on the track or in the gym, I don't see them doing anything we don't.

They are remarkable works, and they have exploded in this 2022. Four Spanish relays have traveled to Eugene, the never seen before: the mixed team, the two short relays and the women's long.

The women's 4x100 has been planted in the final and has been fifth and has beaten the Spanish record on two occasions: it had lowered it to 42.61 in the semifinals, and to 42.58 in the final, a sensational milestone.

(The jump is excellent: in just six years the record has been lowered by almost eight tenths, one world)

And in the mixed zone of Hayward Field, the protagonists hug and shout:

-If it is that we have stood up to Switzerland, Germany, Italy and the Netherlands -says Maribel Pérez.

-And I didn't believe it. I've been watching this on television all my life and now I've been one of the protagonists -adds Sonia Molina-Prados, the first reliever.

-If passing the semifinal had already been a rush, imagine this -said Paula Sevilla.

-And at the end, we got in a circle and Maribel told us: 'Record this, because it's going to be the best thing that happens to you in life' - ends Jaël Bestué, medicine student and eventual singer of r'n' b.

And so, ready to take on the world, they have left Hayward Field, convinced that things are being done well, finally understanding that they are ready to face anyone, it will be the fruit of work, or talent. , or both.

(only the United States, gold in 41s14, and Jamaica, Germany and Nigeria have surpassed them)