The wise pope who stepped aside

Little can be added to the reflections of a theological and moral nature that have been written these days on the occasion of the death of Benedict XVI. 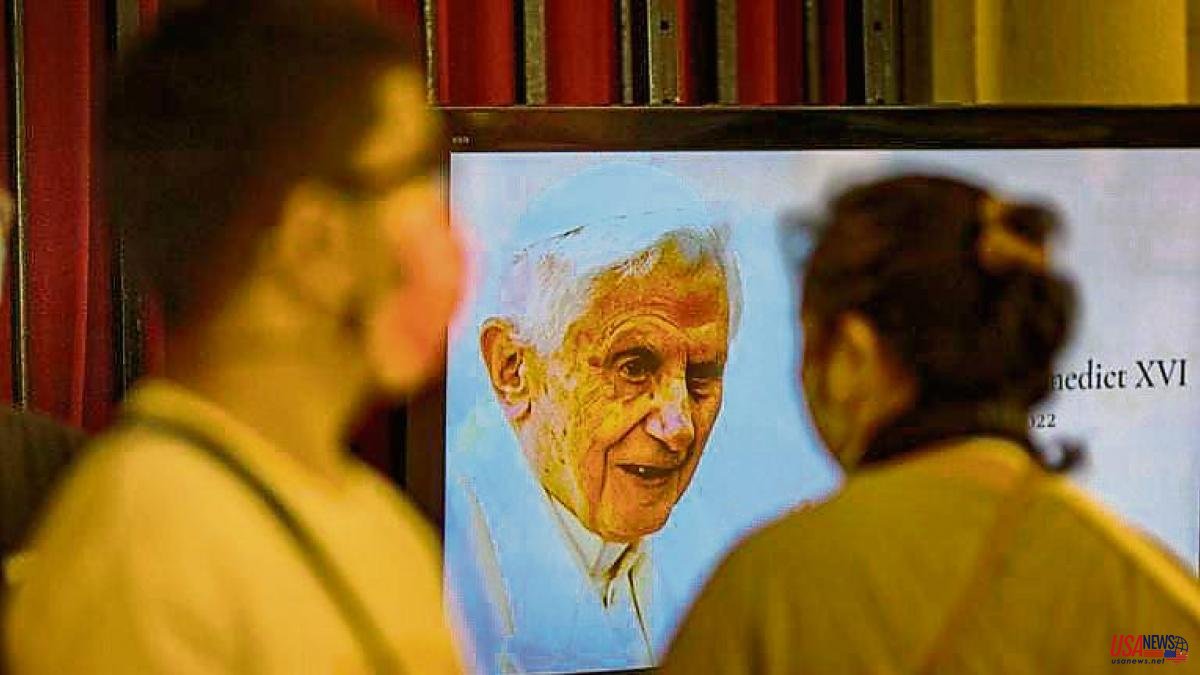 Little can be added to the reflections of a theological and moral nature that have been written these days on the occasion of the death of Benedict XVI. The assessment of his pontificate will be outlined as time goes by and as a consequence of the study of his immense work written before and after being a cardinal or Pope. Reading Joseph Ratzinger is entering the realm of reason to become familiar with faith in Jesus Christ.

His most emblematic work is perhaps the Introduction to Christianity, published in parallel to the events of May 1968 in Paris, in which the young German theologian states that no one can escape the great human dilemma: "Whoever wants to escape the uncertainty of faith will fall into the uncertainty of disbelief, which will never be able to affirm in a certain and definitive way that faith is not the truth”.

It is interesting how he situates the struggle between faith and doubt that has gone through the history of humanity. It is a fundamental law of human destiny, he says, “to find what is decisive for your existence in the perpetual rivalry between doubt and faith, between contestation and uncertainty. Perhaps precisely for this reason, doubt, which prevents both from sealing themselves hermetically in what is theirs, can itself become a place of communication. Doubt as a meeting space to be able to talk about the highest and most prosaic things, as could be seen in the dialogue between Joseph Ratzinger and the philosopher Jürgen Habermas in which these two privileged minds discussed Europe, the location of religion in modernity and about how Christianity is or is not an Enlightenment religion.

Strolling through the thousands of pages written by Benedict XVI is diving into the thought of a rationalist theologian who addresses the connection between concepts as essential as individual freedom and social justice, between conscience and truth, between democracy and the State, in the relativistic world. of post-truth in which subjectivity and the power of the majority seek to relegate absolute values.

It dedicates many pages to the truth, to the values ​​and to the power of the State and of the Church. Today, he says, we prefer to talk about values ​​rather than truth in order not to conflict with the idea of ​​tolerance and environmental relativism. For Ratzinger it is not proper for the Church to be a State or a part of the State, but rather a community of convictions. The Church “should not establish itself as a State or want to influence it as an organ of power. When it does so, it becomes a State and forms an absolute State that is precisely what must be eliminated. Confusing herself with the State, she destroys the nature of the State and her own ”.

In his speech on the occasion of the reception as a foreign associate member at the Académie des Sciences Morales et Politiques of the Institut de France in 1992, he spoke of the moral principles of democratic societies. Before the distinguished French audience, he said that freedom is for everyone and that the moral forces of history continue to be moral forces of the present and that evidence of values ​​without which common freedom is not possible emerges with renewed force.

Joseph Ratzinger argues that the State is not a source of truth or morality, it is not absolute. The concept of the State that wanted to build a pure race and the one that favored the arrival of a new man were buried in the last century.

The pontificate of Benedict XVI has entered history and its lights and shadows will be seen in the light of the deeds and words that the German pope used so much. In one of his texts he affirms that “hope in heaven is not against fidelity to earth: it is also hope for earth. Hoping for the highest and most definitive, we Christians must and must also bring hope to the provisional, to the State in the world”.

One of the episodes for which Pope Ratzinger will be remembered is his unexpected resignation, made in Latin and without any coercion. A friend makes me see that it is possibly the ethics of a sense of responsibility, a concept introduced by Max Weber, that led him to abandon his ministry because he no longer felt capable. A gesture that had not occurred in more than six centuries and that could be more frequent in the future.