The will prevails over the strategy of discord

The tradition continues: very hot and many people. 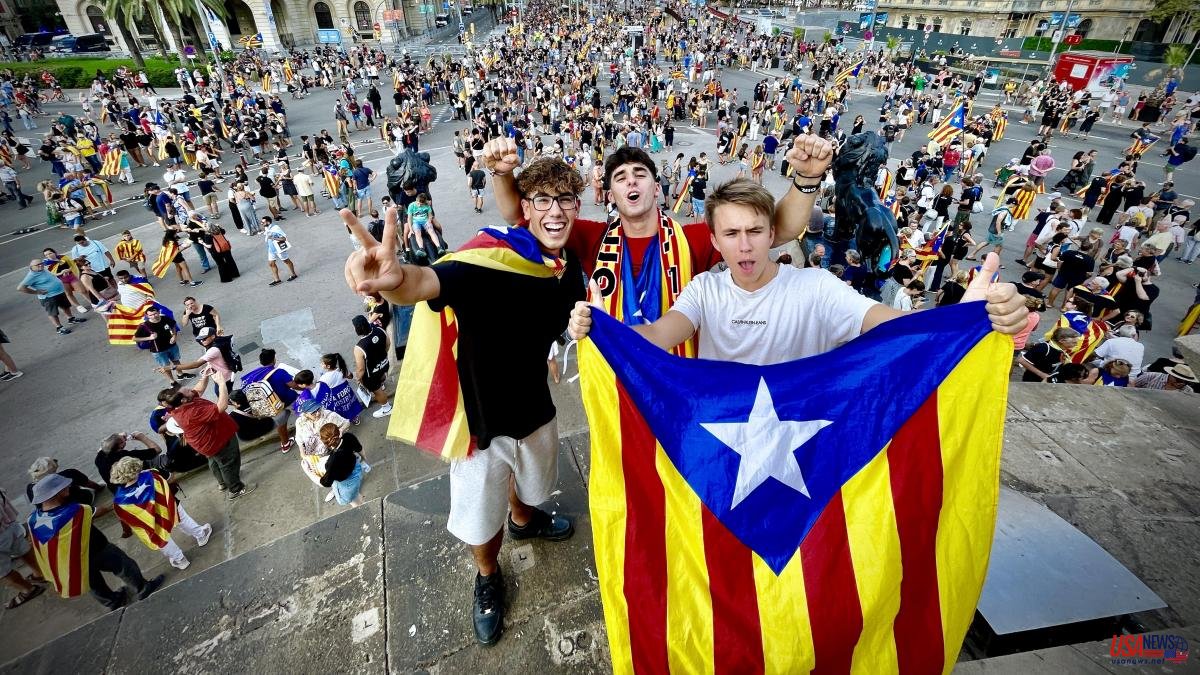 The tradition continues: very hot and many people. The demonstration suffers from the interference of expectations and the manifestometer, a perverse device that is not satisfied with counting the attendees but also interprets them. Let's interpret them, then: there is no cause that can maintain ten years of mobilization as persistent as the independence movement. Following a self-destructive logic, the official Onze de Setembre dispenses with a representation that includes non-independence Catalans and, to loop the loop, establishes a climate of internal discord so original and incongruous that it allows the sharing of government and quotas of power.

The tripartite changes ingredients but maintains the emotion and depths of the Dragon Khan. Today it has four promiscuously asymmetrical tentacles: the ANC, Òmnium, Esquerra and Junts (the CUP is faithful to its prestidigit-agitator principles). Together they have created an atmosphere of centripetal suspicion that is more noticeable on the media surface and partisan theater than on the street. The use of space is optimistic: there are more square meters than demonstrators. This allows to fluff the mobility and avoid the sensation of suffocation.

Illegal estelade vendors can get around better, as can one of the city's classic pickpockets, who looks at me like he wants to convince me he's not on duty. The atmosphere is reminiscent of previous calls but with fewer media, fewer extras and fewer special effects. There are protesters who met ten years ago on Passeig de Gràcia and today they are here with two indoctrinated children and they look like they are about to get divorced. There are also protesters who have seen their hair grow gray and find it increasingly difficult to find shirts that fit the splendor of their bellies, happily earthly. And the dogs dressed in allusive corsets have aged.

Review of banners: a) “Aneu a la merda”, b) “Of the brave politicians, history will speak; of cowards... too”, c) “Why the hell did we vote for you?” and d) “TVRÑ3 is no longer ours”. A Glovo delivery man tries to cross Paral·lel but has to give up. The black t-shirt is a success and connects with a spirit that seems to look, with a mixture of moodiness, pride and impatience, towards October 1, too recent for history to finish distorting it. They call me to tell me that Javier Marías has died. The fucking life. The fucking death.

The header of the demonstration has an almost folkloric symbolic density, cumulative, as difficult to digest as those poke bowls that have become fashionable. Some banners include misspellings that certify the linguistic status of the issue: "Government collaborationists out." The road shakes not because of an insurrection but because the subway passes by.

At 5:14 p.m., the clamor for independence is unanimous, although brief. At 5:25 p.m., at the Kentucky Fried Chicken, Laura Borràs and Jaume Alonso-Cuevillas appear, accompanied by the ineffable Francesc de Dalmases, who carries a crutch (speaking of stately surnames: entities, official bodies and many media continue to perpetuate the error of Rafael de Casanovas to refer to Rafael Casanova). Borràs wears a white jacket and the black t-shirt of the demonstration and sweats like any mortal. She is received with more applause than whistles (and, above all, with an elegant and majority indifference). The enthusiasm of those who greet her and want to take a photo of her next to her has more media value than other clues that also explain reality.

Signs of reality: a major traffic jam at El Molino, shouting at the police helicopter, Joan Crosas smiling and Josep Martí walking around with some Ibizan disc jockey headphones and two books from Libros del Asteroides. There are things that do not change: the anachronistic speeches of the organizers are never up to the attitude and perseverance of the protesters.