The war papers that changed places

Pepe Castells i Pubill, father of the Cardedeu set designers Germans Castells, was called up in 1937, when he was 20 years old. 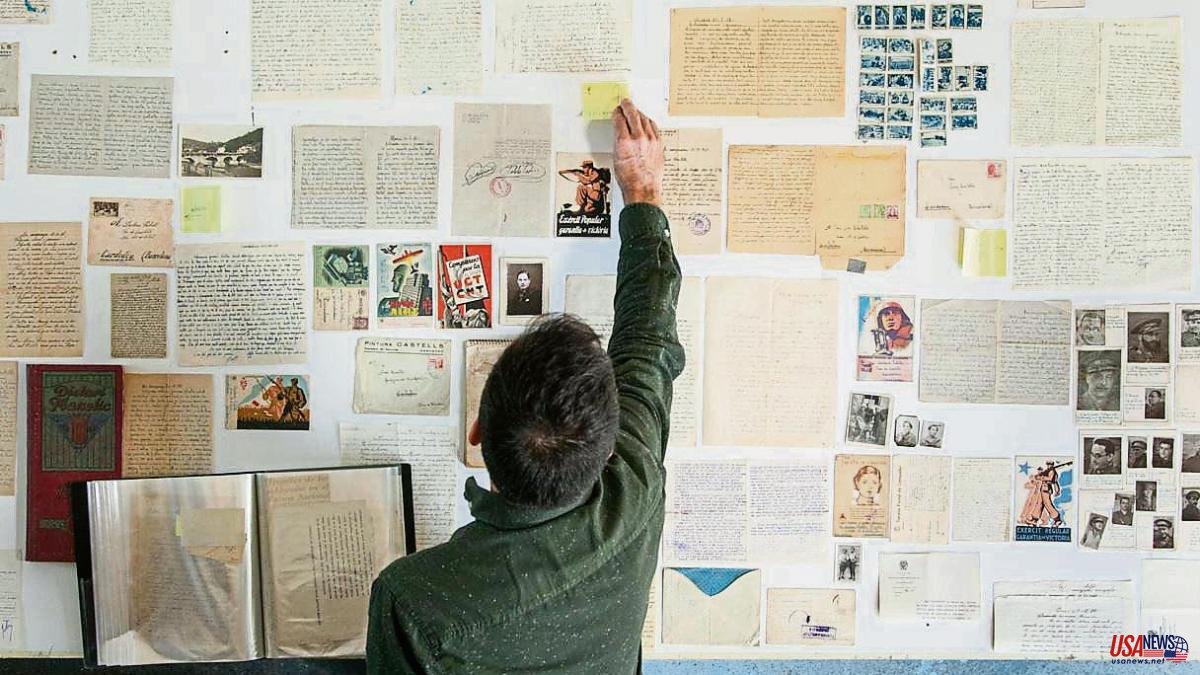 Pepe Castells i Pubill, father of the Cardedeu set designers Germans Castells, was called up in 1937, when he was 20 years old. During that time, he sent letters to his family, drew pictures of the beautiful corners he found in the middle of the war, and wrote a diary: “Memoirs that I intend to write upon joining the Army in the disastrous war to which we are currently being subjected, the Spanish, in case some day of peace I can read them as a family”.

Pepe was assigned to the Aragon front; they wounded him and took him to a hospital in Madrid, and when he recovered, he fought in the defense of the capital.

The young soldier was very interested in saving the letters he received, and he asked his family to also save the ones he wrote to them. “One of the singularities of this material is that the letters sent and those received are preserved”, highlights the director of the Memorial Democràtic, Jordi Font. Now all these papers and drawings see the light, thanks to the work carried out by one of his grandchildren, Lluc Castells.

The result is Papers de la Guerra (Arola), a box containing a reproduction of the handwritten diary; a fold-out with reproductions of the original documents, "which offer a beautiful portrait of the graphics of an era"; a book that includes the study of the material, with the transcription of the diary and the letters; a screen print with one of his drawings; and the reproduction of two postcards that the government of the Republic distributed to the soldiers.

But Pepe Castells, although he carefully kept all this material, returned so touched by the war that he never wanted to talk about it again. “I wanted to talk to my grandfather about the war, because he had shrapnel marks, and he began to cry and I understood that he would not tell me anything”, recalls Lluc Castells. "When she died, my grandmother read me a letter, and when she died, then I did order them and gave them to Pepe's children to read."

"The war package", as they called it at the Castells' house, changed places. Pepe, if it seemed to him that someone had touched him, he would put him in another hiding place. That is why each of his children remembers him in a different place: on top of a closet or in a corner of a chest of drawers.

“My grandmother discovered me removing it and she slapped me so that I didn't want to look at it again,” recalls Josep Castells. And his sister Dolors adds: “One day I took out the diary, read the first page and was so moved that I put it back as best I could. But he must have noticed because she sealed it again with painter's tape.

Josep Castells describes what his father was like: “He instilled in us the values ​​of a job well done, with extraordinary generosity. He had a great sense of humor and was very committed to what he had to do ”. For this reason they have not wanted to publish a traditional edition.

Lluc Castells sums it up like this: "Beauty saved it from the war, and for this reason we wanted it to be reproduced as an author's piece, so that this testimony and this beauty would reach the present."

As the editorial project was not cheap, they launched a Verkami of €35,000, which they far exceeded (€41,206). “If we couldn't reproduce the original notebook, it lost all value. My grandfather used to say: 'If you do it, do it well, and if not, don't do it'”, concludes Lluc.