The war moves to the farm fields

Maria takes her time to walk the hundred meters between her house and the store in the rain; she knows that the man in a military jacket who kills seconds smoking a cigarette will wait for her. 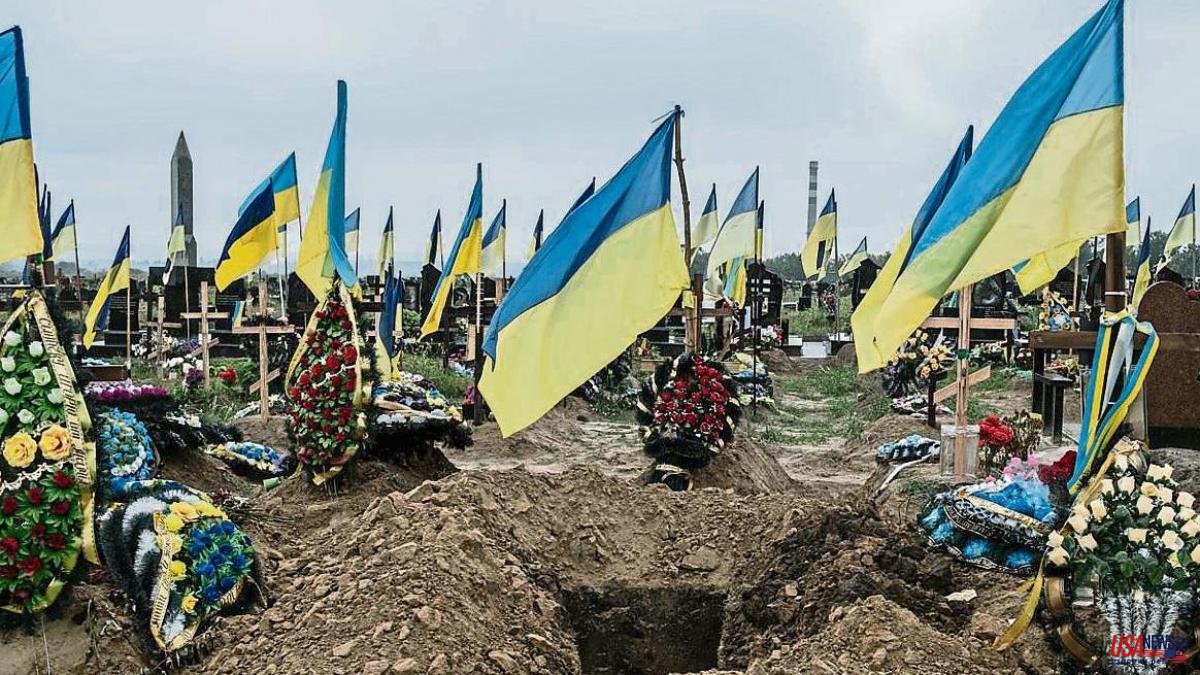 Maria takes her time to walk the hundred meters between her house and the store in the rain; she knows that the man in a military jacket who kills seconds smoking a cigarette will wait for her. Her store is the only one open in Domanove, a rural town on the border with Belarus where life goes by as slowly as her walk. Part of the population has left, the enemy forces are only two kilometers away and the Ukrainian defense positions can be seen from the main road. They have moved into a military zone. “We have been very scared, but now we are used to it,” she says.

In the windows of the store there is a mixture of varied products necessary to survive in a place that seems abandoned by time: bread, sausage, stuffed fish, notebooks, toiletries... During the first days of the invasion he could not sleep - testimony repeated by the inhabitants of the town. Any noise scared her and her mother-in-law, with whom she lives. They didn't know where to hide, and they didn't know what to expect either. They were overwhelmed by events. “As days passed, we realized that our army had managed to stop them in some places in the Ukraine and that all the European countries were helping us, but it was very hard,” says this woman, who covers her head with a blue cloth, in the traditional way. This July morning is almost winter cold, but temperatures can climb to 35 degrees at this time of year.

The presence of the Ukrainian forces is the main reason why Maria is calmer, now that the tension on the border is rising again. Days ago, the mayor of the city of Lutsk, Igor Polishchuk, denounced that the movement of military equipment and troops on the Belarusian side had intensified in recent weeks. Some witnesses speak of tanks, which has led the Ukrainian forces to raise the alert in this area that seems to be a battle front, although without action.

Dozens of concrete barriers stand on the road that connects the interior of the province of Volhynia with the Domanove border crossing. Trench systems have been opened in the forests surrounding the highway. Different groups of soldiers, border guards and volunteers have set up camps in the surrounding area and control the checkpoints. The transit of non-residents in the area is prohibited, and the crossing from the Ukrainian side is closed. The same does not happen from the Belarusian, but only for passers-by.

Very few dare to cross, no more than two a day. “They asked me many, many questions. Almost two hours”, confesses Natalia, a Hare Krishna devotee who had crossed Ukraine from Zaporizhia – in the south of the country – to the border with Poland and from there to Belarus to attend a meeting with her teacher. The day we found her she had crossed the lonely border, protected by steel hedgehogs, along with her 12-year-old daughter. With her suitcases as company, and the insistent rain, they waited for some transport that would accept to take them to the interior of the Ukraine.

Olha, another of the inhabitants of Domanove, says that until the invasion, life was not like that. The border crossing was a coming and going of people, including locals who went to buy products such as milk and cheese from the neighboring country. They did buy clothes and household products in Ukraine, "they are of better quality," she acknowledges.

But both Olha, 33, and María, the 83-year-old lady from the store, acknowledge that what most affects them from the closure of the border is the economy. “If this is going to continue like this, people will starve. And even so we have to be aware that we have to help the east and south of the country”, confesses the older woman who lists that the harvest is not good and they will not be able to sell it; and that small activities that they did to earn extra money, such as picking mushrooms in the forest, are prohibited. Many sectors are mined as part of the Ukrainian defense system. Most survive on what their gardens and livestock produce. "Now what we fear is that winter is coming and we don't know what will happen to the gas... we don't know if we will have money," explains María, who agrees to show the sauna lined with pine wood where she usually sleeps when it gets cold unbearable.

The harvest of red fruits from the Olha family, especially blueberries, has been good this year. Although they do not know how they will be able to distribute it. She is one of the few young women, with young children, who decided to stay. Or return, in her case. They left for a week after the invasion, but they came back because they had to plow and sow the land, from which they live. But she is worried about her daughter that she asks questions all the time. “If she hears a knock on the door she asks: Are the bad guys coming? We go somewhere by car and we see soldiers and she asks: are the men good? Will they stop us?” he says.

He says that it was impossible to hide from him that he saw images on television showing the abuses of the Russian forces in regions north of Kyiv. "I couldn't stop crying when I saw him, I broke many times thinking that something similar could happen to us here," says Olha, who remembers that summers were a good time for his work. In addition to farming, she has a small home beauty salon. But this year no one has come to the town to spend the summer, on the contrary, those who have been able to have left. She will stay for now. Like María, she says that if they have survived other hard times in the past, they will also be able to do so this year.