Artist Ivanna Kripiakevich-Dimid sits at the end of an old wooden table in the attic of her home in central Lviv. 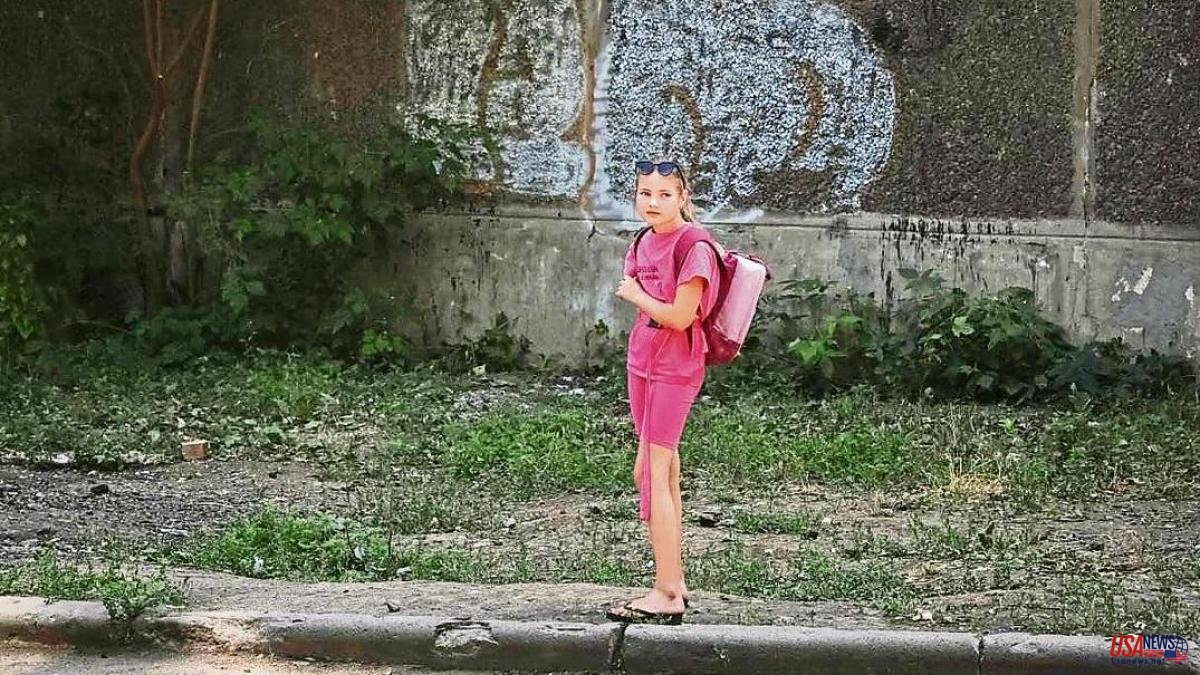 Artist Ivanna Kripiakevich-Dimid sits at the end of an old wooden table in the attic of her home in central Lviv.

Dozens of prints of saints painted by her hang on the walls, and at the other end of the table rest other watercolors with darker themes on which she has worked since the beginning of the war and a book, Seneca's Letters to Lucilius. , which Artem carried in the backpack that accompanied him to the front. The same one he had read over and over since he was young.

“His reading helped him harmonize his feelings. It is not easy to kill people when she is 27 years old, ”explains her mother, who, on a folder embroidered with red flowers, unfolds one by one the photos of her son. The one that is seen dressed in blue with embroidered wings on her chest is placed to her right. "His life was heaven, his eyes were blue like heaven," she says. She had jumped out of a parachute over a hundred times in order to pass her instructor exam.”

And so, photo by photo that he places on the table, he reconstructs the life of the eldest of his five children, who died on June 18 in the east of the country. He had enlisted days after the invasion, which began when he was on a trip to Brazil. The same day he jumped from the top of Corcovado. He sold the motorcycle on which he was touring the country, bought a bulletproof vest, a helmet, and returned to Ukraine a few days later. At the beginning of March he was already wearing the uniform. "He was a person full of life, he couldn't sit still and he gave his life for his country," says Ivanna, who says that those who fight don't do it because they hate those in front of them, but because they love those behind them.

“I received a message telling me that they were very sorry, that something terrible had happened, but I didn't know who they were referring to,” recalls Ivanna. At that time she was in Belgium. She had traveled there with her husband, a priest of the Ukrainian Greek Catholic Church, and her mother-in-law. “I called and asked the man: “Who are you talking about? Because I have two children in the war”, says the artist, who from that moment felt as if her right arm had been cut off. “Since then I feel like I'm part of a movie,” says Ivanna. Added to the sadness of the loss of Artem is the anguish of not knowing the whereabouts of her 22-year-old son, who is fighting in an unknown place.

The fate of combatants is often a secret from their families. What increases the anguish of theirs; Every day they face the fear of receiving a call with bad news. The government does not publish the number of deaths, but weeks ago President Volodymyr Zelensky assured that at least 200 combatants were dying daily in Donbass. Hundreds of wounded are added. To them must be added the civilians, including more than 300 children.

Igor, seven years old, was miraculously saved. This is what his doctors say. He was playing in a Kharkiv park when a cluster bomb fell. He hit her kidney, her liver and her chest. He is out of danger, still connected to a respirator, in the San Nicolás children's hospital, where he arrived thanks to a group of volunteers who transferred him from more than 900 kilometers to Lviv, a journey that most of the extremely seriously injured have to make. in the East. And also the deceased, transported in refrigerated trucks.

“I had told him not to leave the house, to stay at the door, but it is very difficult to control a child. Especially because those days there was a bit of tranquility," says Natalia, Igor's mother. The 33-year-old says she has no choice but to be strong. She has another daughter who is with her in Lviv, they live with a host family, and her husband is a military man. "I can't think about my sadness and my pain because I have to fight for my children to survive," she says.

Similar words are expressed by Irina, Volodymyr's 27-year-old mother, who died at the beginning of the war. They were in a military convoy on their way to Chernobyl when they were attacked by Russian rockets, the Ukrainian army would explain to the family. Irina's pain becomes greater because she believes that her son rushed to join as a volunteer the same day the war began; Her friends asked her to wait a couple of days to join the special forces that he had belonged to in the past. After Euromaidan he had enlisted like many young people in the army; he then he was stationed for a while in the Donbass. He then retired, lived abroad and for a couple of years he had returned to become a successful businessman. His mother was happy with this change in life, but the very day the war began, Volodymyr did not want to wait. He joined the first army group from his region. And a few days later he was back on the front lines. “When I spoke with him that day he asked me for permission to go, he told me that he would be very careful but that his job was to protect his country,” says Irina, whom we met at the Kalush cemetery, a town in western Ukraine that gained international renown after Oleg Psuk won the Eurovision Song Contest.

This morning he is together with his youngest son and Olha, Volodímir's fiancée, who, like the rest of the family, is trying to rebuild her life. “Now it is very hard for us, but I always remember that he would not like to see us cry, suffer. He always wanted us to be happy and share happiness”, says Olha, who smiles trying to take the drama out of her tears. None of the three stop crying during the visit to the young man's grave. Irina explains that, as therapy, she sometimes meets the other mothers at the cemetery. “We try to support each other with good words, hugs or some other way,” she says.

Ivanna, in Lviv, also meets some mothers at church; they are still very few, the war keeps them all busy. However, she says that those conversations leave her exhausted, depressed. She has decided to focus her energy on teaching art classes to hospitalized children and soldiers facing a long recovery. Before closing the conversation, she states that she now understands how deep Artem's pain was. She says that at the age of 20, when the 2014 revolution, she lost many friends. “That is not normal for a young man of that age. After that he built an emotional barrier with me, as if he was preparing me for this moment, ”she concludes.