The unsuccessful search for Ansu Fati

Almost two years have passed and Ansu Fati is still searching, chasing clues, gathering sensations, rehearsing movements and smiles and looking in the mirror but he doesn't finish recognizing himself. 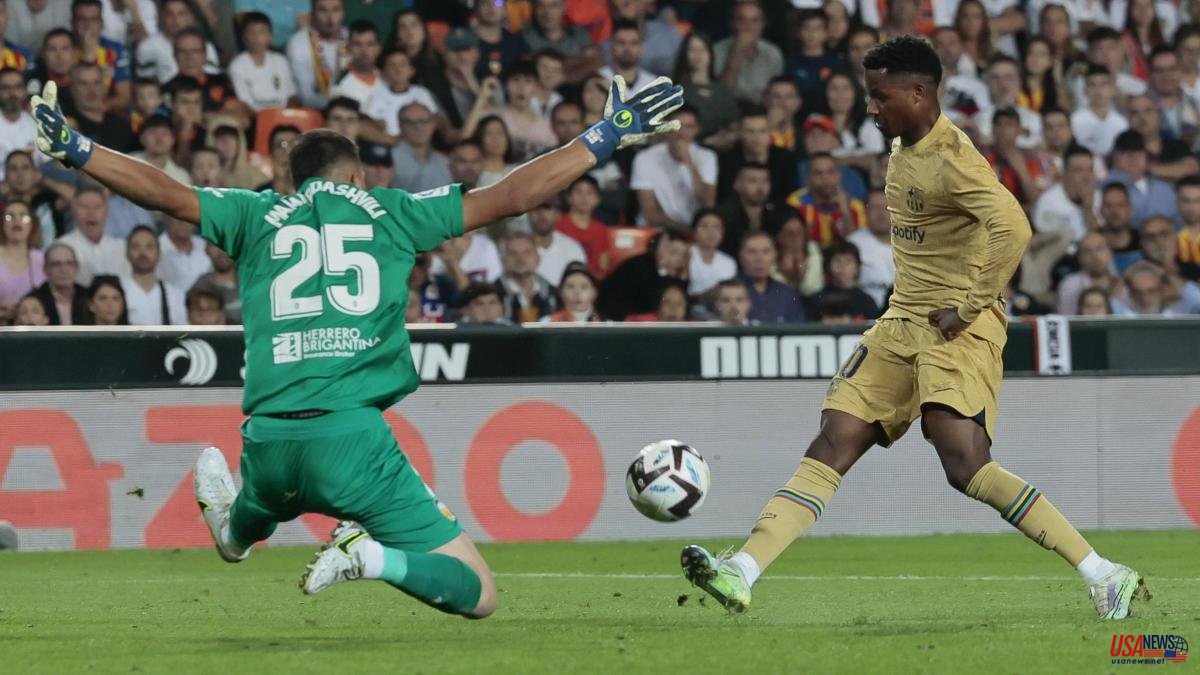 Almost two years have passed and Ansu Fati is still searching, chasing clues, gathering sensations, rehearsing movements and smiles and looking in the mirror but he doesn't finish recognizing himself. As if it were Dorian Gray, Barcelona fans want to see the striker. He remembers him young – he still is, tomorrow he will be 20 – fresh and beautiful to the point of seeing him as a possible heir to Messi. But he is not the same. Time has not stood still. On the contrary. He advances inexorably to the boy touched by a wand. It is hoped that one day the pieces will fit together as if by magic and the spell will be recomposed. That day he is still far away.

On November 7, 2020, in a clash with Mandi in a Barça-Betis game, Fati's left knee got stuck on the Camp Nou pitch. There he began a path of thorns towards the return with countless steps through the operating room. Three officially. It took almost eleven months for him to dress in shorts again and since then the irregularity marks the gradual recovery, with sudden stops, improvements and new pauses, important goals, muscle injuries and chiaroscuros.

Sometimes Ansu looks more like, other times he is a shadow. Accustomed to overcoming defenses, it is the games that surpass him. Sometimes, the team accompanies him, gives him time and takes the pressure off him. When things go wrong, like this week with the Champions League elimination, he is needed more than is advisable. And the kid does not complain but he shows his face and wants the responsibility.

Not only the Blaugrana club is under pressure. Ansu Fati is also in a hurry. He missed the Olympic Games and a European Championship in 2021. Perhaps he dreamed of a brilliant start to the season that would give him the ticket to the World Cup in Qatar with the national team. But he is still unconsolidated.

Xavi is dosing him. The one from Mestalla was only the fourth ownership of the course. Instead he is one of the few players in the squad who has participated in all 17 games. More or less, but he plays. He adds minutes and picks up pace. And, although he searches, he does not always find, unlike his teammate Lewandowski, author of 18 goals, 15 more than Fati, who scored a goal in August, another in September and the third in October, where he assisted at the Bernabeu with a great explosive play against Valverde and Camavinga, and scored against Villarreal.

Against Valencia – a rival he is good at: 2 goals – he was the player who stepped on the area the most, who was the closest to scoring, but was unable to make the difference when he has always had a great love affair with goals. After a great pass from Pedri, he was left alone against Mamardashvili and opted to shoot the ball over first before trying to dribble past the goalkeeper. The goalkeeper covered his face. When he finally beat the Georgian, the goal was disallowed for offside. Instead, twice he was able to charge his left leg and both times the shot went wide without going between the three sticks. It is a sign that wanting is not synonymous with power.

He ended up substituted in search of fast legs, different ideas, success and spark. Precisely the characteristics of him. The ones he keeps looking for.