The United States rethinks its strategy to face the Chinese economy

China is often said to be a rare arena of consensus in American politics. 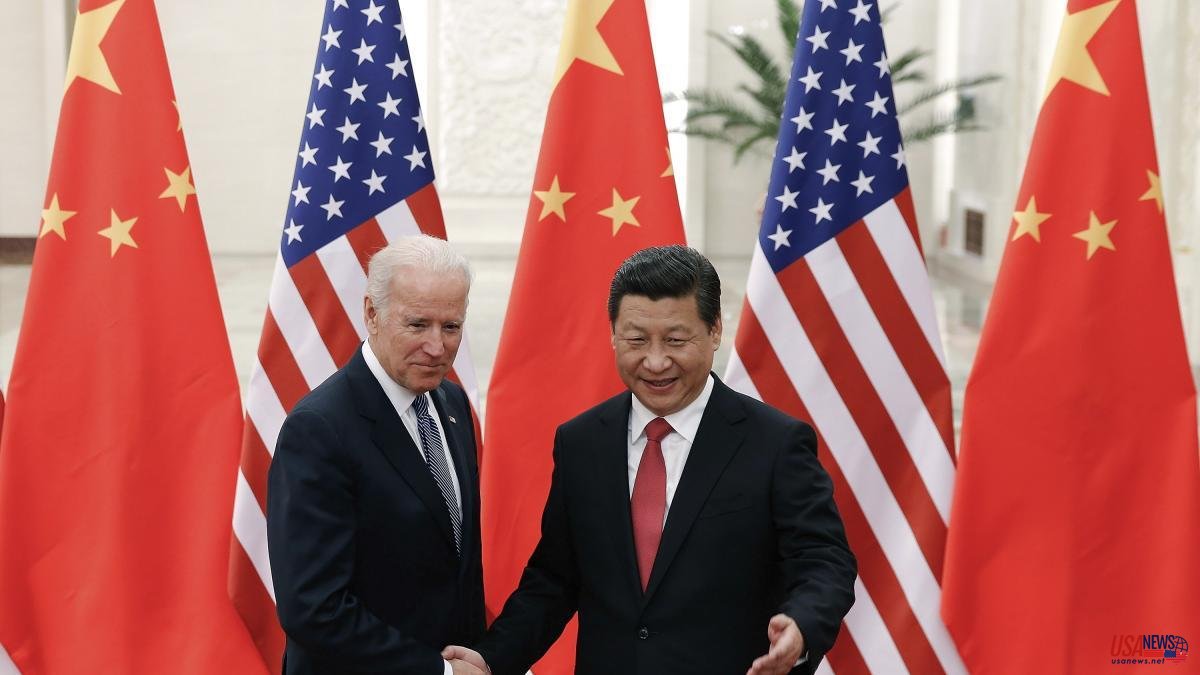 China is often said to be a rare arena of consensus in American politics. Almost everyone agrees that something must be done to counter its rise. However, this appearance of unity hides divisions and even confusion about exactly what needs to be done, especially economically. Which is the ultimate goal: to open the Chinese market to US companies or to dissolve trade ties with China?

In the Joe Biden administration, those conflicting considerations have sparked lengthy deliberations, to the point where some critics accuse him of paralysis. The seemingly endless debate over removing tariffs on China is the latest example of indecision. Yet little by little, Biden's approach to the Chinese economy is taking shape. The coming weeks will determine whether it is a determined and coherent strategy or a web of contradictions.

The story is quite clear. In a speech in May, Secretary of State Antony Blinken summed up Biden's China policy in three words: "invest, align, compete." That is, the United States must invest in its own strength, align itself more closely with its allies, and confront China where necessary. Actually, twists and turns aside, they are good categories for understanding how the Biden administration is trying to deal with China's economy.

Let's start with the competition. It came into the spotlight under President Donald Trump, who steered the United States away from a persistent desire to "engage" China in a more intense rivalry. By the time Trump left office, the average US tariff on Chinese goods had jumped from about 3% to nearly 20%, according to calculations by Chad Bown of the Peterson Institute for International Economics (see chart 1). The immediate question for Biden is what to do with that inheritance.

With inflation on the rise, Biden wants to reduce pressure on prices. In theory, the removal of tariffs on China (which are, in effect, a tax on consumers) would help. In practice, your contribution may be very small. According to a study by the Peterson Institute, the elimination of tariffs would only reduce the annual inflation rate by 0.3 percentage points, which today already exceeds 8%. On the one hand, everything counts. On the other hand, Biden does not want to do something that Republicans, and perhaps China itself, consider capitulation.

Even within their own government, many see tariffs as valuable leverage. The most likely result will be minor adjustments. Trump's first tariffs targeted products like semiconductors, but later levies hit items like shoes, hurting consumers more directly. So removing tariffs on some consumer products seems like an easy decision. Beyond that measure, opposition to the cuts becomes more resistant. "In the case of tariffs on high-tech products or industrial inputs, the Biden administration may want to increase them substantially while removing others. It has to decide which ones work and which ones don't," says Clete Willems, a veteran of the Trump trade team. Trump. The hawks celebrate that the US imports less from China than it did at the start of the trade war (see chart 2).

The Biden administration has also debated whether to launch a new investigation into China's economic behavior. Trump's big investigation, carried out under section 301 of the US Trade Act (used to address issues that cannot be resolved within the WTO), focused on "forced technology transfers" from China. Many in the Biden administration see this as a misdiagnosis. The real problem is the great state capitalism of China.

A new 301 investigation would put China's industrial plans and subsidies at the forefront of US economic grievances with that country. Intellectually, it would be interesting. "The biggest challenge will be: Is the government willing to do what Section 301 says? Is it willing to impose significant new sanctions on China?" says Scott Kennedy of the Center for Strategic and International Studies, a think tank of Washington. The White House's delay in announcing a new 301 case, despite the fact that it has been talked about for months, shows its hesitation.

Another of the pillars of the United States' competition with China is the battery of economic sanctions applied to companies. The Trump administration led the way by including Chinese industrial champions (from telecom giant Huawei to drone maker DJI) on its "entity list," preventing US companies from selling anything to them without permission. . By the end of his tenure, however, the methods used had become increasingly chaotic, illustrated by the unsuccessful demand that TikTok's Chinese owner spin off its US operations.

The Biden team has worked to put the sanctions on a stronger legal footing, while making them more specific. Most of Trump's corporate blacklists remain in place. Biden has expanded them, as well as barring US investment in a number of Chinese surveillance tech companies. He is also studying new rules to block foreign rivals' access to Americans' personal data, which could still strain TikTok. Taken together, Biden's approach looks less like a retreat from the Trump-initiated fight with China than a professionalization of it.

The second part of Biden's strategy -- aligning himself with allies -- takes him much farther away from his predecessor. While Trump enjoyed disparaging America's most stalwart friends, Biden has moved resolutely to mend relations. The cornerstone of his approach to Asia was unveiled in May with the launch of the Indo-Pacific Economic Framework (IPEF), which brings together countries representing 40% of global GDP. India, Japan and Vietnam are part of it and, most crucially, China is not. Another fruit of Biden's efforts was a joint statement at the end of the G-7 summit on June 28, which included a commitment to "reduce strategic dependencies" on China.

There are doubts that those good words will be translated into concrete actions. The messages shared by various Asian diplomats about IPEF are very similar: It's good to have America back at the table, but the only item on the menu is a humble polenta porridge. The IPEF will include discussions on everything from decarbonisation to data sharing, but there will be nothing on tariffs, a mainstay of traditional trade talks. The Biden administration rejects that characterization. A senior official says IPEF will focus on supply chains, and says it will do so in a substantial way. Talks are scheduled to start at the end of this month, and the official believes an agreement to speed up port clearance times could be reached within a year.

As much as results are achieved, many are frustrated in the United States and other countries by the fact that Biden does not do more in the commercial field. A persistent bipartisan group of politicians in Washington continues to insist that the United States rejoin the Trans-Pacific Partnership, a regional trade agreement that Trump withdrew from. Such reincorporation would greatly appeal to allies such as Japan, which believe that the creation of new supply chains is essential to reduce dependence on China. However, for the Biden administration, the idea is impracticable; he fears alienating union supporters and angering a trade-wary public. The unsatisfactory conclusion is that Biden's desire to align with allies in his China strategy can only go so far.

That calls into question the last element of Biden's approach: investing at home. This is the realm where rhetoric and action are furthest apart. After all, Biden's flagship spending plan, his Build Back Better climate and social package, has yet to pass Congress. The moment of truth has arrived for an initiative that was conceived as a response to China. The Senate and House of Representatives have passed two alternative bills with the same key point: a $52 billion plan to bolster America's ability to produce semiconductors. The Senate's is more modest and has received bipartisan support. The one from the House of Representatives, backed almost exclusively by Democrats, contains a large number of measures, including even funds to save coral reefs.

Some people familiar with the bridging talks say there has been recent progress moving the unified bill closer to the Senate version. One aspect of the House version could survive in a reduced form: the creation of a mechanism that, for the first time, would force US companies to notify the government of their foreign spending; this would raise the possibility that the White House would block some investments in China. For the bill to pass before the midterm elections scheduled for November, the deal will likely need to be sealed before Congress's August recess.

Even without that bill, the Biden administration has tried to set the tone for a national investment push. Trump tried, with little success, to cajole and threaten companies into setting up factories in the United States. Biden's big initiative, which grabs fewer headlines, has been a broad overhaul of supply chains. In February, the government released six separate reports, covering semiconductors, batteries and other products. This is not a Chinese-scale industrial policy, but the goal is to channel financing and incentives to strengthen America's manufacturing base.

Biden's plan may push a door open. Since the start of his tenure, companies have announced more than $75 billion in investments for semiconductor research and production in the United States. This is partly a response to Biden's actions, but also an acknowledgment of the fragility of global supply chains. In fact, perhaps the most useful policy to keep companies out of the Chinese market is Xi Jinping's reckless "Covid Zero" policy, which has all but isolated the country.

If Biden succeeds in boosting domestic manufacturing, that victory could result in higher prices for consumers, reduced efficiency and, ultimately, lower economic growth. It is true that he is rebuilding bruised relationships with his allies. In other respects, however, his economic strategy for dealing with China looks a lot like a refinement of the bare-knuckle war initiated by Trump.