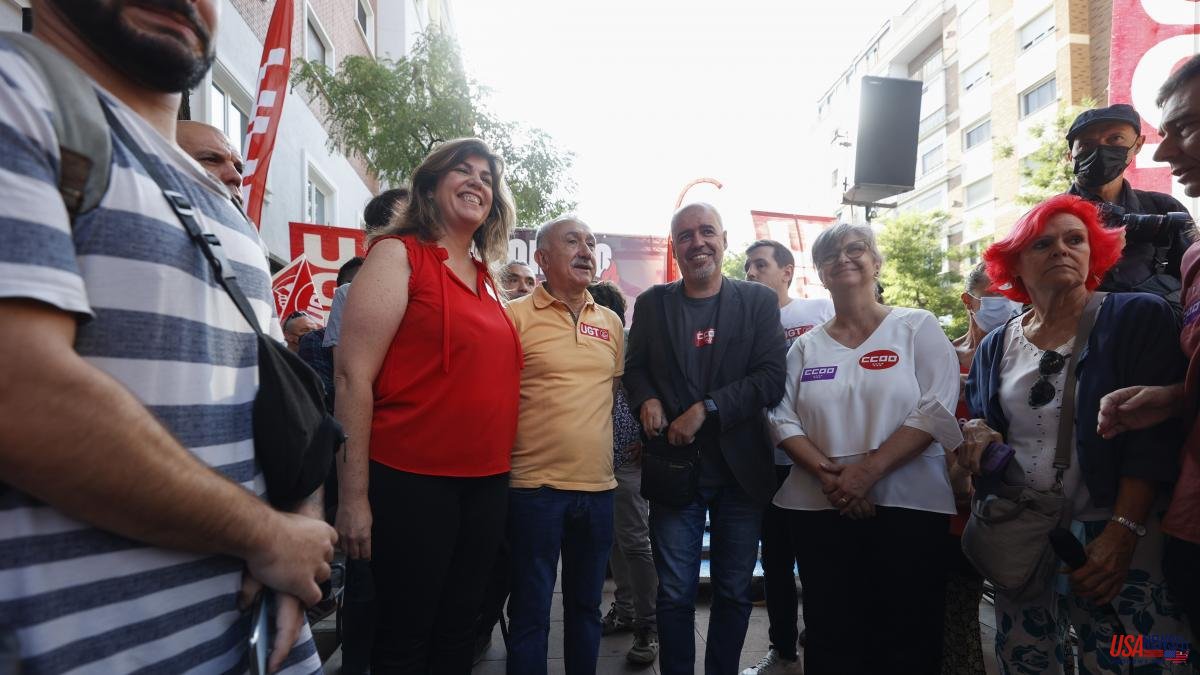 UGT and CC.OO. They have begun this Wednesday to heat up an autumn that, they threaten, "will be conflictive if businessmen refuse to negotiate." The main leaders of both organizations, Pepe Álvarez and Unai Sordo, have shouted it clearly and loudly to the CEOE at the very door of its headquarters on Diego de León street in Madrid.

Accompanied by more than a hundred participants (data pending official confirmation), both Álvarez and Sordo have assured that there is no room for the current passivity on the part of the employers in the negotiations of collective agreements.

The unions assure that the agreements that are being signed so far in the metal sector in both Cantabria and A Coruña show that there is room. “It has cost us a lot, very strong mobilizations in some cases, but wage increases of more than 4% have been achieved. Which shows that it can be done”, Álvarez assured.

Therefore, they refuse to accept the salary devaluation that employers want to impose with their refusal to update contracts and raise salaries. "The dilemma is whether the fight for the rise in wages is made in a framework of conflict or is included in the framework of normal collective bargaining," Sordo pointed out.

They do not raise margin. “Salaries or conflict” the militants of both unions shouted at the doors of the CEOE. The one in Madrid is just one example of the concentrations that are taking place throughout the morning of this Wednesday before the headquarters of the employers' associations in different provinces.

It is just the appetizer of what the unions are ready to do in the fall. Although they rule out the call for a general strike, because agreements have already been signed in important sectors, they do bet on massive mobilizations.

The problem, as Álvarez explained, is that the lowest wages are in sectors where union representation is weaker and therefore there is not as much bargaining power, he assured, citing specifically the hospitality sector. “It is unacceptable that hospitality businessmen refuse to raise salaries when they then charge customers up to 40% more to reserve a room than last year. What do they want to recover in a year everything they have not earned during the pandemic? We are not going to leave them”, assured the UGT leader.

The strategy of the unions is to force the employers to sit down to negotiate, and if that trick does not come out, they will demand from the Government a new review of the minimum interprofessional wage. “We are not going to allow workers to lose purchasing power, while companies in all sectors raise prices and gain profit margins,” they assured this Wednesday.

Regarding the meeting scheduled for this afternoon with the Government and social agents, Pepe Álvarez was very skeptical. "We found out about the call through the press and there is no agenda," he explained to the media during the mobilization before CEOE.

In any case, both Álvarez and Sordo make their premises clear. “An income agreement is not a salary return. corporate tax must be addressed, not just create a tax for large energy companies, because there are many companies that are passing on the entire cost in consumer prices so as not to reduce their margin, while many others have spent years accumulating "thousands of million surplus". And that the cost of this war be distributed among all”, assured Unai Sordo.

They find the announced increase in taxes on energy companies insufficient because, according to them, they all have heaven-sent benefits. They consider it essential that the Government articulate a mechanism by which banks, hoteliers also contribute to assuming the cost of the war... "By touching the taxes paid by capital, an income agreement can be facilitated that protects those who are having the worst time and to implement measures that really serve to contain prices," says Sordo.