The far-right of the Republican Party has made clear this Wednesday its willingness to obstruct and even block the normal functioning of the United States House of Representatives and thus boycott its main representative institution. 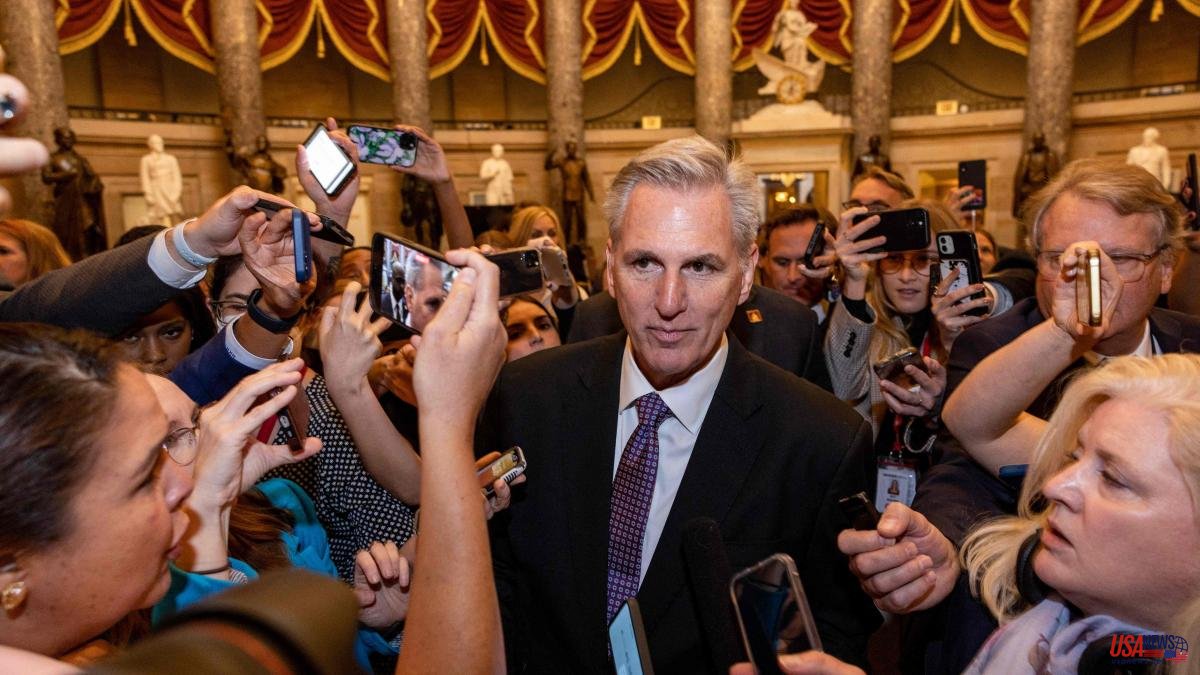 The far-right of the Republican Party has made clear this Wednesday its willingness to obstruct and even block the normal functioning of the United States House of Representatives and thus boycott its main representative institution. The objective is to force what its members call "a change in the status quo" of the parliamentary body; a change that nobody knows exactly what it consists of, except to ensure high shares of power for them.

The twenty Republican representatives who knocked down the candidacy of the party's official candidate for the presidency of the House on Tuesday in three consecutive votes after his narrow victory in the November legislative elections, Kevin McCarthy, repeated the operation yesterday. Only this time they did it despite calls against the no less ultra Donald Trump, who is obviously losing influence within the conservative organization.

The former president wrote on his social network, Truth Social: "Republicans: do not turn a great victory into a giant and embarrassing defeat. It's time to celebrate, you deserve it. Kevin McCarthy will do well; maybe even do a great job."

There was no case.

For the fourth ballot and fourth boycott against McCarthy, the ultra rebels nominated African-American Byron Donalds as their alternative candidate. He was his third name, after having appointed Andy Biggs and Jim Jordan the day before, while the Democrats obviously re-introduced their new leader to replace the veteran Nancy Pelosi, the New York representative Hakeem Jeffries.

But the name of the alternative presidential candidate proposed by the ultras was the least of it. What was essential for them was to make clear their unwillingness to give in to McCarthy's calls and offers to make possible his election and, with it, the restart of the legislature. Because the House of Representatives cannot function without a president; it cannot appoint the different commissions or resume its legislative work.

The fourth unsuccessful vote for McCarthy ended with 201 votes in his favor, 20 for the ultras and 212 for the Democrat Hakeem Jeffries.

The Republicans are making history, for the worse. Because it is the first time in 100 years that a candidate for president of the House of Representatives is not elected in his first attempt to access the position after his party won the elections in this body, as the Republican formation achieved last November despite winning only by 9 seats (222 to 2013) and losing in the Senate.

After the fourth romp, the Republicans opened an internal debate about what to do. One of the proposals was to force a sufficient number of abstentions to lower the majority threshold established in the vote, which is not computed on the number of attendees to the session but on the number of those who vote for a specific representative in it.

Said reduction in the threshold of the simple majority that the candidate needs can be achieved, therefore, on the basis of absences or abstention votes; in this last case, the parliamentarians limit themselves to saying "present": an option for which the Republican from Indiana Victoria Spartz opted for in this fourth ballot.

McCarthy opted to try again with a fifth ballot. The ultras then reintroduced Byron Donalds, and the Democrats, Jeffries. At the time of writing this information, everything indicates that history will repeat itself. It will be, if there is no twist at the end of the vote, the fifth bump for McCarthy.

Before the House began the session, President Joe Biden spoke about the crisis to denounce the "embarrassing" spectacle that the Republicans are giving and that, in his opinion, "does not give a good image of the country."

For this reason, the head of the Government asked the opposition party to solve the election of the president of the Chamber once and for all. "I hope they get their act together," he said. Because "the rest of the world is watching" the chaotic scenes in Congress, he added. And, without wanting to weigh in on any possible path of solution or on which candidate could prevail, he insisted: "I think it's really embarrassing that it's taking so long." But "it's not my problem," he said.