Lionel Messi celebrated the world title for the Argentine team almost two weeks ago at the Lusail stadium. 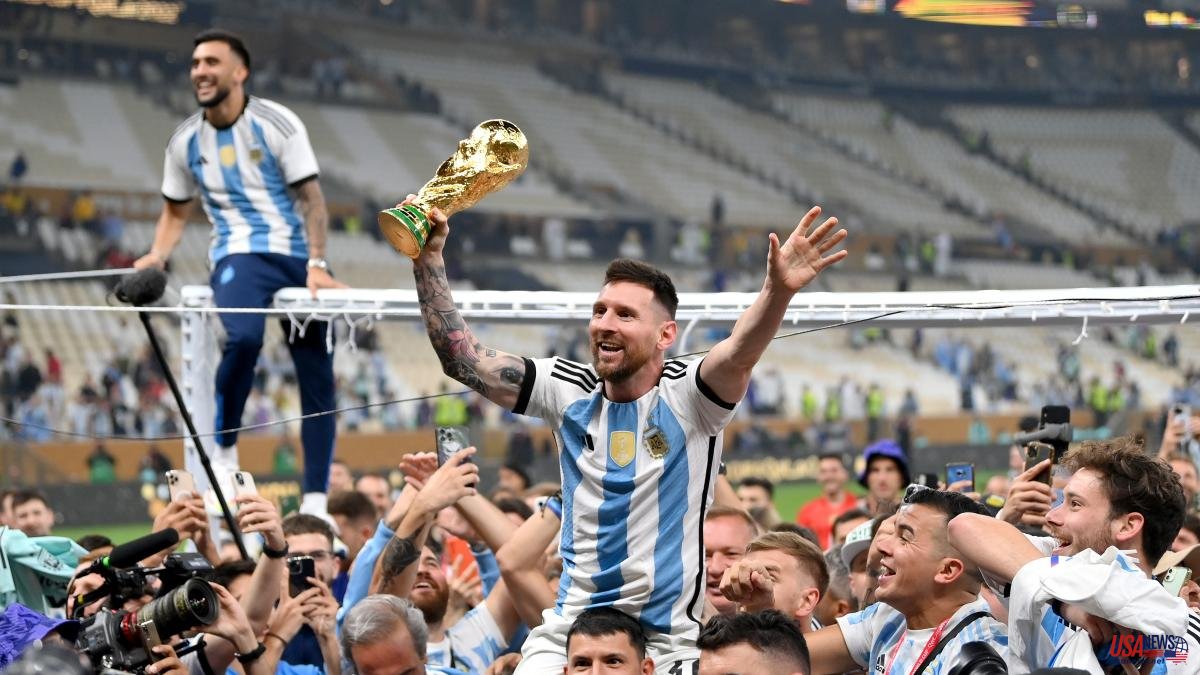 Lionel Messi celebrated the world title for the Argentine team almost two weeks ago at the Lusail stadium. The image of him, with the cup in his hands, was on the front page of all the newspapers and traveled the entire world. But the trophy that 'the flea' raised that night was not that of FIFA. That cup is a replica that has owners, it is in La Plata and it entered the field by chance.

It seems crazy, but it is not. It is not one of those many absurd theories that circulate on the internet. This is the true story of the fake cup that the Argentine captain raised in the most iconic photo of Qatar 2022 and which is currently the image with the most likes in the history of Instagram (74 million).

Two days after the agonizing final against France, Fernando de la Orden, photographer and special envoy for Clarín and Olé in Qatar, published a screenshot of Di María and Messi on his social networks to remember the victory for the Albiceleste. The people from Rosario kissed the trophy and were smiling. "Did you get to hear what they said there?" asked a curious user.

Fernando responded concretely to his colleague: "Di María told Leo that he had turned (mini) around with a fake glass, he had the real one, that's why they laughed." Everything was left as if it were a joke. One more message among hundreds of comments and congratulations.

But eight thousand meters high, from a plane headed from Doha to Barcelona, ​​a woman writes: "Fernando, I just read a comment. We own the fake cup and we pass it on to the players on the field. Very funny. Thank you."

After 38 consecutive days of work on the other side of the world, eating poorly and not sleeping much, Fernando did not pay much attention to that message. Why would Lionel Messi raise a fake cup? Does it have something to do with that photo that was circulating on the networks where two trophies were shown simultaneously? Would FIFA allow so much chaos with the official trophy? The questions were piling up.

Fernando had this woman's contact because his daughter was the protagonist of the Argentine flags and he had agreed to send her photos of the girl, very photogenic by the way. However, when he began to connect the dots, he realized that it could be true. He had to investigate.

On New Year's Eve and already installed in their home in Buenos Aires, Paula Zuzulich (41) and Manuel Zaro (42) receive a team from Clarín to explain how they entered the stadium with a replica so similar to the cup ordered by FIFA for the celebrations and why it ended up on the field in the hands of the players.

"The day of the final arrived and we took the cup to the stadium, keeping it in our backpack so it couldn't be seen," explains Manuel. And he continues: "After the last penalty we took out the cup and began to celebrate. At one point a relative of Paredes passed by and we yelled at him that we wanted Leandro to sign the cup for us."

-How many times did the cup enter the playing field?

-The cup entered the field, in total, three times. The first time, when the relative of Paredes takes her away, the relatives take photos, he goes from one side to the other and Leandro signs it. The second time he comes in again, I don't remember with whom, the cup is there longer. They ask us to take more photos between players and family. And the third time a relative of Guido Rodríguez comes, there were few people left. And again photos were taken.

-When did you realize that this cup is the one Messi raised at the festivities?

-After the match ended we began to see photos and what route our cup had taken. We still didn't know that it was the one that Leo had raised. Little by little we were looking, with friends who also sent us photos, until we began to see details of the bottom part, which has specific marks, and we began to discover it.

-Then you are sure that your cup is the one in Messi's Instagram photo...

- Yes. We are sure and it is corroborated that this is the cup with which Messi turned around and is the most liked in the world.

-How did you manage to enter the stadium with the cup taking into account the security procedures?

-The truth was very difficult to enter the stadium. We pass it through the scanner and when the policeman turns around I tell my friend 'take the drink'. There we took advantage, they put it in a bag and entered the stadium.

-What characteristics does the trophy have?

-It's not just another replica. Through social networks we contacted people who are dedicated to making glasses and it took them six months to make it. This cup has the weight of the original, it is made with resin and quartz inside and bathed with a gold-like paint.

Paula and Manuel say that they planned this trip more than two years in advance and, in fact, they asked for this cup a long time ago: "We had ordered it several months ago and we had brought it from here," they say.

His idea was "that the players can sign it, nothing more." Once the trophy entered the field of play and was passed from hand to hand, they thought they would never see it again.

"We thought that we would not recover it anymore. It was about 45 minutes that the cup was in the hands of one player to another, from one family member to another. They took photos, it was all very nice, but we wanted it to return. Luckily it returned in the hands of Lautaro Martínez", says Manuel.

When Lautaro Martínez realized that Paula and Manuel were the owners of the cup, he approached, along with Paredes' relative, signed it and returned it to the owners. That moment will remain forever etched in his retinas.

Then a small episode happened that led to confusion: the FIFA representatives approached the people of La Plata, who never moved from the stands, because they believed that the cup in their possession was the official FIFA replica with the that they should celebrate and that now rests in the AFA. The inspectors realized that it was all a mistake and left them alone.

Paula and Manuel traveled to Rosario, to Di María's mother's house to pick up some shirts signed by the world champion. However, they had the luxury of meeting Angelito, who was reunited with the cup of the festivities. A sequence that makes this story even more impressive.

"We had made contact with the Cuti Romero and we knew that Di María's relatives were in the same hotel. We found them in a corridor and asked him for Ángel to sign some shirts for us. One of the sisters took our shirts to have them signed, one idol, and we told her that we were going to look for her in Rosario. And we managed to get Ángel to receive us and take photos with the glass," says the couple.

-How did you contact Clarín to tell this story?

-We have two children, Salvador and Victoria. Victoria was always made up and encouraging and the truth is that she has taken many photos of her. They have passed us photos from all sides. She was the link with Fernando because she had agreed to send me the photos where she appeared. There was the contact.

-Did you think at some point during the festivities that they were not going to recover it?

-When the cup goes, it starts from one hand to another. I saw the players with our cup, the relatives, all taking photos. The minutes passed and I thought that the glass did not come back anymore. Those who were next to me said 'that's it, you lost it'. Inside me I thought that I did not recover it anymore. I was thinking how I go from outside the stadium to explain to them that the cup was ours. It was going to be very difficult.

Did they take you to all the games?

-No. We had tickets for all the games. We all saw from Argentina. But we did not take the cup to any game, it was only thought and planned for the celebrations of the world final.

-After learning that this is the cup that Lionel Messi raised in Lusail, did anyone want to buy them?

-When we were there we offered the glass to everyone so that they could take pictures. We left the stadium last. And one of the guys asked me for my contact number and two days later he ended up offering me money for the drink because he wanted to buy it. We told him no, thank you very much, the cup was coming to La Plata.

-Did you have an unexpected call from a relative or acquaintance with whom you had not spoken for a long time?

-Many people have seen us on TV. They sent us the photos appearing with the cup, of Victoria, of Salvador. Everyone is welcome to take a picture with the cup that Messi had in his hand.

-Where is the cup going to be?

-Now the cup will stay here at home. We don't have a place in mind. We want to make a display case with all the souvenirs that we brought from Qatar, the tickets, small key chains, merchandising that they gave us, that they gave to the children. Hopefully we can allocate a place to present the cup.