The Trajectory of the Week award to Joan Francesc Mira

Readers, writers and publishers gathered yesterday at La Setmana del Llibre in Català, at the Moll de la Fusta, to celebrate the talent of the Valencian anthropologist, Hellenist, writer and translator Joan Francesc Mira as a result of the 26th award ceremony. 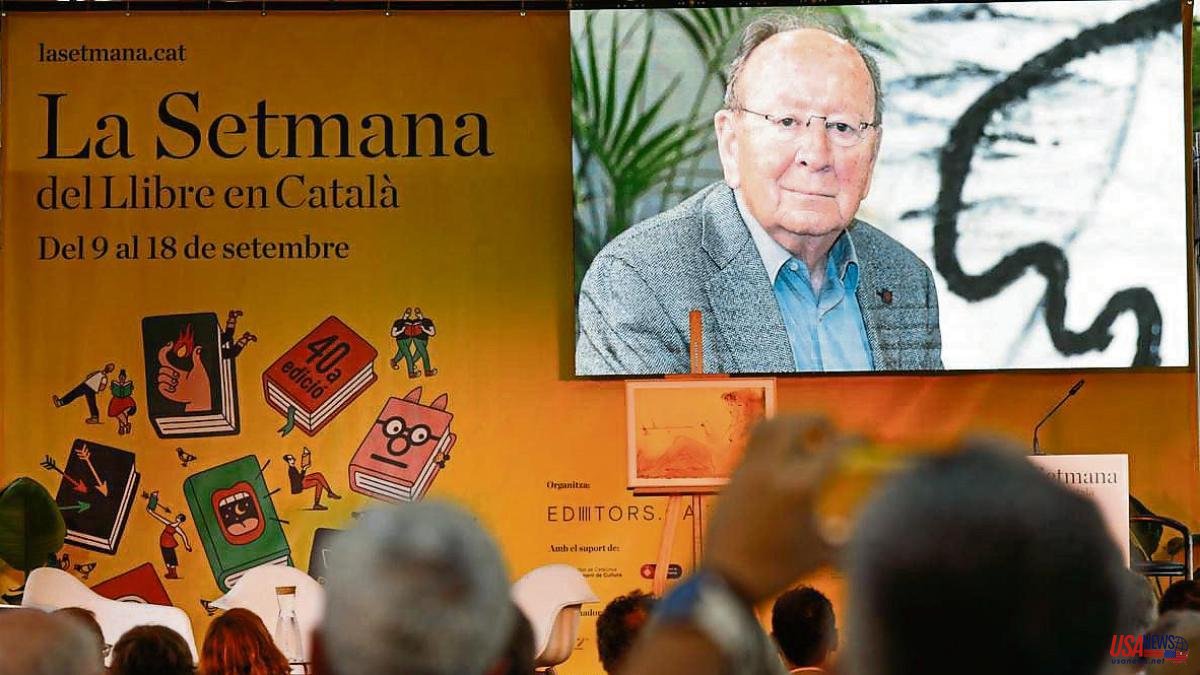 Readers, writers and publishers gathered yesterday at La Setmana del Llibre in Català, at the Moll de la Fusta, to celebrate the talent of the Valencian anthropologist, Hellenist, writer and translator Joan Francesc Mira as a result of the 26th award ceremony. Trajectory Award. The Valencian intellectual could not go to Barcelona to receive it for health reasons, but he followed it on streaming and thanked the award in a video. Author of forty titles between narrative, memorialism and essay, Mira has recently assured that at 82 years old he already considers the productive stage closed. His latest book, published a few weeks ago, is Quatre qüestions d’amor (Proa). The award jury is made up of actors from the book sector and cultural journalism, and consists of an original work by a renowned artist, which this year was done by Perico Pastor.

As a preview of the act, the writer Clara Queraltó read the Setmana manifesto, in which the use of the Catalan language on equal terms is claimed and calls for measures to be taken to protect it. “Publishers in Catalan know this very well: in Catalonia out of every ten books that are sold, only three are in Catalan. And in the Valencian Country and in the Balearic Islands, the percentage of sales in the native language is even lower. (…) We demand that language be stopped being used as a political weapon, that practicality criteria be eliminated and that language be privileged in areas such as administration, education or the public media; in the technological sector, social and audiovisual networks, where it is necessary for language to truly make a space its own; also in areas such as companies, unions, shops and public services, instead of adapting to an environment in which Catalan is increasingly lacking. (...) It is necessary that civil society does not delegate to politicians or the school the sole responsibility or alone to modulate and amend the environment and that it does not give up in the field of collective uses”.

The actress Mercè Pons read several texts by the winner accompanied by the cellist Marta Roma, and recited that for Mira “paradise would be an infinite library”. The presenter of the event, the journalist and writer Marta Vives, defined him as "above all, a man of culture", before passing the word to the president of Setmana, Joan Carles Girbés, who explained that what he likes most of the position is precisely the delivery of the Trajectory award. Girbés also glossed Mira, whom he claimed as "a primordial figure" and "the most outstanding Valencian intellectual of our days", while highlighting "the calculated sarcasm of someone who is still surprised by what happens around him and for all the world". There was also an emotional applause for Vicenç Pagès Jordà, recently deceased, after a few words that he had dedicated to the winner.

Finally, a round table on Mira was held with the writers Adrià Pujol Cruells, Núria Cadenes and Jordi Cornudella. Pujol explained that although Mira defines himself as "anti-baroque" he has some "lyrical outbursts that are worth an empire" and a sarcasm that "is not disrespectful but long live life". Núria Cadenes recalled that “when I arrived in València and I didn't understand anything, it didn't make sense to me (...) but I picked up her book València per a veïns i visitants and began to understand her, I approached her, because Mira “explains the world to us ”. Vives recalled how Mira's prose combines intellectual and classical references with Mediterranean sensuality, and Cornudella explained that in some way Mira is as if he were "a son of Josep Pla" because of the clear and "transparent" style, there is never a see between things and what it is telling you.” Mira's wisdom, he says, “is made of curiosity to know how the world works”, because according to Pujol “she is not someone who has given up life to write, but who has written because she has lived”. One life, one path.