An adventurer on and off screen, Errol Flynn (1909-1959) dedicated himself to prospecting for gold and pearls, was a miner and coconut collector, boxed in the 1928 Olympics and ended up in Hollywood as Captain Blood, Robin of the forests, in General Custer and in many other of those characters that made children (and adults) from all over the world fall in love with cinema forever. 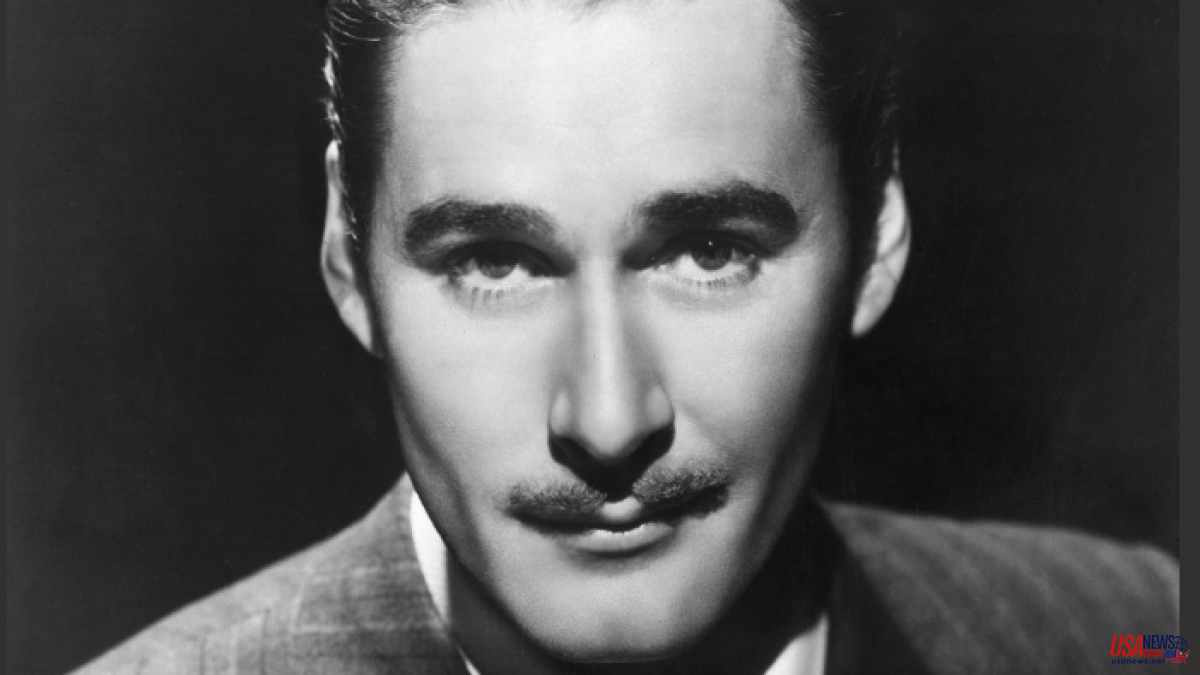 An adventurer on and off screen, Errol Flynn (1909-1959) dedicated himself to prospecting for gold and pearls, was a miner and coconut collector, boxed in the 1928 Olympics and ended up in Hollywood as Captain Blood, Robin of the forests, in General Custer and in many other of those characters that made children (and adults) from all over the world fall in love with cinema forever. Flynn's life was as short as it was tortuous, but the actor left the world a legacy of eternal exploits, adventures and fantasy.

Flynn came to Hollywood after living a thousand adventures in real life, he did not dream of being an actor, he was not a movie lover, but he had a magnificent smile, an elegant mustache and a slender body, everything necessary to be the new hero of the big screen. It only took one film for the public to appreciate and applaud those qualities. In Captain Blood (Michael Curtiz, 1935) Flynn was a doctor from the times of James I unjustly imprisoned in the West Indies who managed to escape to become a feared pirate.

"Complete triumph of Warner Bros, of Curtiz, of the famous novelist Sabatini and of all those who have somehow intervened in this beautiful creation, made for all audiences, since to appreciate a drama like this you only need to have boiling blood in your veins and a heart that beats full of passion", pointed out the review published by La Vanguardia in 1936. In addition to success and fame, the film gave Flynn another gift, Olivia de Havilland.

Flynn and de Havilland were the quintessential adventure movie couple. They shared the bill in eight films to invite viewers to let their imagination run wild between duels of swordsmen, cannonballs, attacking villains and damsels in distress. In The Charge of the Light Brigade (Michael Curtiz, 1936), Flynn is a British officer stationed in India who finds himself embroiled in the Crimean War while competing with his brother (Patric Knowles) for the love of De Havilland.

Robin of Locksley took refuge in Sherwood Forest on his return from the crusades to fight the evil John the Landless and to steal from the rich and give to the poor in the unforgettable Robin of the Woods (Michael Curtiz, 1938). There was never a Robin Hood like Flynn or a sweeter Lady Marian than de Havilland and the public appreciated it. The spectators also applauded They died with their boots on (Raoul Walsh, 1941) with Flynn transformed into General Custer fighting against Crazy Horse's Indians at the battle of Little Big Horn and in love, of course, with de Havilland.

Flynn lived a more than delicate moment in 1940 during the filming of Gentleman Jim (Raoul Walsh, 1942) when two minors, Peggy Satterlee and Betty Hansen, accused him of "statutory fraud": "One of them claimed that he had raped her on land , the other said that in the sea", according to Kenneth Anger in Holywood Babilonia. There was a trial and plenty of headlines that could have ended the actor's career, but Flynn got lucky and was acquitted by a mostly female jury.

Before being the stuff of tabloid headlines, Flynn had let his acting skills show in The Private Life of Elizabeth and Essex (Michael Curtiz, 1939) where he played the handsome Earl of Essex in love with an already mature Queen Elizabeth I recreated by Bette Davis. The film served to increase Flynn's popularity and prestige and also to create a lifelong feud with Davis.

Flynn had also starred in the literary adaptation of the Mark Twain novel The Prince and the Pauper (William Keighley, 1937) in which the King's son is exchanged for a humble boy with whom he bears a strong resemblance. And he had fallen back into de Havilland's arms repeatedly in films like Dodge, Lawless City (Michael Curtiz, 1939) or Camino de Santa Fe (Michael Curtiz, 1940). He also stood out in El halcón del mar (Michael Curtiz, 1940), another pirate where Flynn was a brave English corsair who drove the leaders of the Spanish colonies crazy.

But in the mid-1940s, after the rape trial and despite the acquittal, Flynn's star began to fade. He worked on several films, but he only regained box office success with Objective Burma (Raoul Walsh, 1945), a war film set in World War II where Errol led a group of American soldiers through the Burmese jungle whose mission was to destroy some facilities Japanese.

Errol never stopped having adventures, although not as romantic as those of his youth. He was in Spain in 1937 to support the Republican side during the Civil War and to write a chronicle about the war. He went to Batista's Cuba to join Fidel Castro's revolutionary troops. And he never stopped sailing the seas with his beloved sailboats. But in the 50s there was very little left of that magnificent smile that had elevated him to fame, his body had lost the slenderness of yesteryear and not even his mustache was elegant anymore.

The alcohol had destroyed the handsome adventurer. "A true whiskey sponge, Errol Flynn no longer gets a job almost anywhere. He has lost almost all his memory and can learn very few roles," said a chronicle published in 1958 in La Vanguardia, which also included a cruel anecdote starring by John Houston: "Houston, Flynn's good friend, gave him a curious role last year - second row, however - in The Roots of Heaven, where he had to play an English officer who rolls around Africa always drunk to forget his misbehavior in the war against the Japanese. Houston told him: 'A role you can play without putting down the whiskey bottle.'

Flynn's problems were not only physical, the actor was financially ruined, partly due to the monetary demands of one of his ex-wives, Lili Damita, and partly due to his dissipated pace of life. In 1959 he traveled to Vancouver to sell his boat and get some money, but when he arrived in Canada he began to feel bad and passed away. He was 50 years old. He seemed much older. Flynn had aged badly, but in the memory of the thousands of viewers who fell in love with the cinema thanks to his films, he will always be the handsome Robin or the brave Captain Blood with a magnificent smile, slim body and elegant mustache.